One year in, the recall campaign against Gov. Mike Dunleavy has slowed 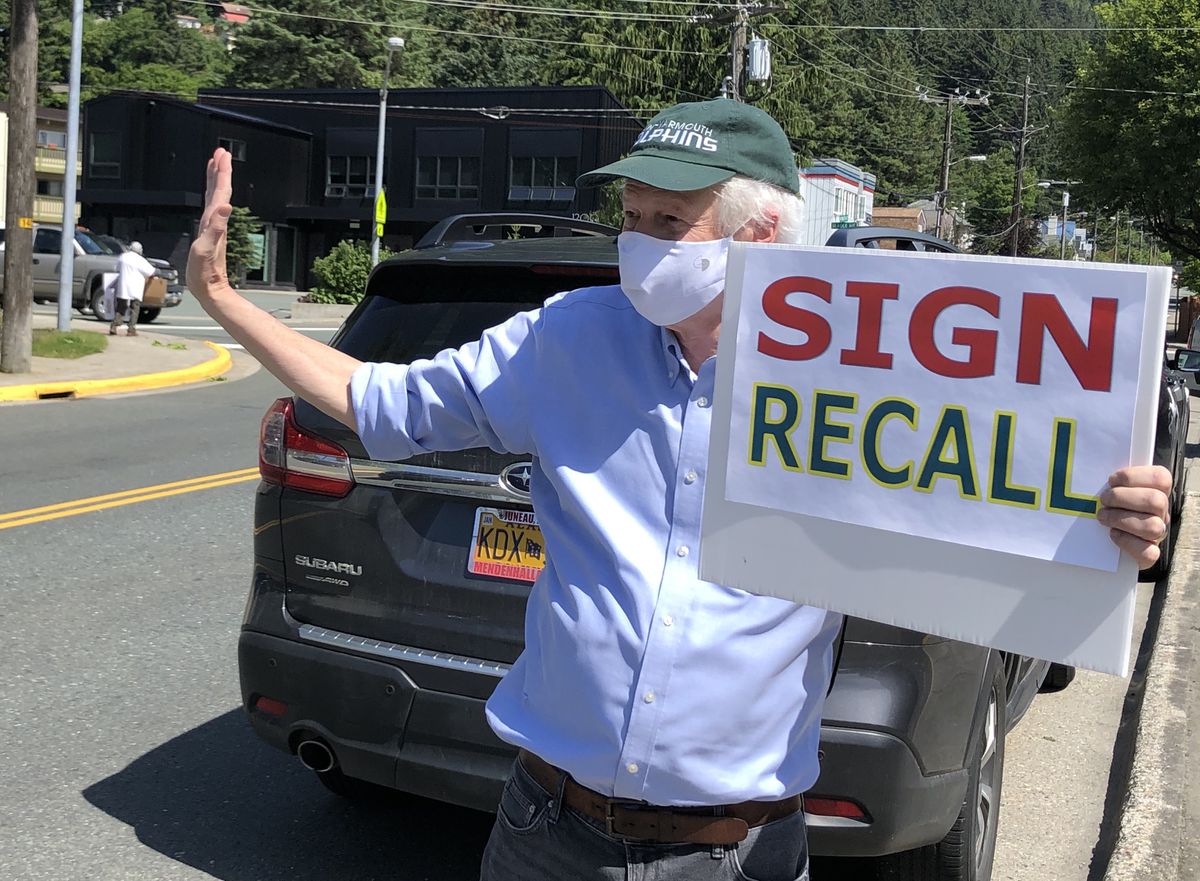 A year ago this month, opponents of Alaska Gov. Mike Dunleavy launched a campaign to remove him from office.

Furious over budget cuts and led by a multipartisan coalition that included the last living signer of the Alaska Constitution, 49,006 Republicans, Democrats and independents signed a petition within five weeks.

That was enough to start the recall process and a lengthy court fight that concluded earlier this year. Recall backers are now trying to force a statewide vote with a second petition.

But in four months of work, they’ve gathered fewer signatures than they did in five weeks last year.

The large gatherings that the recall campaign held in summer 2019 have been banned this year for public health reasons, and supporters say the difficulty in gathering signatures is solely to blame for the slow pace of the recall this year. The governor and his supporters have a different take.

“I would like to believe it’s because folks believe we’re doing a decent job,” Dunleavy said.

Through May, Alaska had the fewest virus deaths of any state, had one of the highest testing rates, and hospitalizations were comparatively few.

This year’s budget process was smoother, Dunleavy’s cabinet has lost its most controversial members, and while the governor continues to support a larger Permanent Fund dividend — an issue that divides Alaskans — he hasn’t called a special session on the issue, as he did last year.

With the recall lagging, plans for a summer vote have slipped to November, and even that is beginning to appear optimistic.

Asked why the recall is moving so much slower this year, she laughed.

“We have to be reasonable and realize we have the unprecedented pandemic,” she said.

Recall backers need the support of 71,252 registered Alaska voters to force a statewide vote, and signatures from last year’s petition don’t automatically roll over. Following a decision by the Alaska Supreme Court, signature-gathering kicked off in earnest at the end of February. By March 9, the campaign had 21,678 signatures. The state imposed public health restrictions a few days later, and signature-gathering slackened.

The recall switched tactics, holding drive-through events and sending petition booklets to signers through the mail, but it hasn’t restored the pace of those first two weeks. By June 26, the recall campaign reported having only 40,200 signatures. DeWitt said Thursday that it now has more than 41,000.

“This is a marathon. This is a slow burn,” she said.

Other observers say the pandemic has given Dunleavy a chance to demonstrate his work with something other than the budget struggles that sparked the recall.

“From my perspective as an outsider, I think Gov. Dunleavy’s handling of the COVID virus has allowed Alaskans to see his true leadership skills and his adaptability in a crisis, and I think they like what they see,” said Ann Brown, vice chair of the Alaska Republican Party.

Nationally, most Americans have liked how their governor is handling the pandemic, according to a series of national polls published in April, and feelings about the pandemic aren’t the same as opinions on Dunleavy in general.

But campaign consultant Matt Larkin — a Dunleavy ally who has worked with the campaign against the recall — said polls also indicate Alaskans are feeling better about the governor. Last year, his polls indicated that in a recall election, Dunleavy would lose. Now, they say the opposite, Larkin said.

“Our polling shows a majority of Alaskans do not support recalling the governor, and I believe that if a recall election were to happen, the governor would win handily,” Larkin said.

Other polls show matters differently, and there is a lack of reliable third-party surveying in Alaska.

“The question is, even though I think his favorability has moved up, would the same people still vote to recall him, even though they give a tip of the hat for the pandemic?” asked Jim Lottsfeldt, a political strategist who typically works with Democratic and independent candidates.

‘Is it worth the headache?'

Aaron Griffin is the kind of swing voter that Lottsfeldt referred to. A socially conservative Republican who lives in Kodiak and formerly served on the island borough’s assembly, he signed the recall petition last year but hasn’t signed the new edition this year.

Griffin is still furious with the governor’s cuts to the state ferry system, but after the pandemic began, “I did think that his early handling of the COVID emergency was competent,” he said.

He said he’s concerned that changing governors in the middle of the pandemic emergency would harm the state. In addition, this year is the second of Dunleavy’s term. If a recall election takes place next year, “he’s only going to have a year left, and really, honestly, is it worth the headache and the horsepower to make all of that stuff happen?”

Alternately, there are people like Jerry Adams, who didn’t sign the first petition but last week was gathering signatures for the second.

A longtime Juneau resident and founder of a local meat and seafood processing company, he said the governor’s budget cuts “really put a curve in us.”

His work at a drive-through signing station marked the first time he was returning to volunteer since the COVID pandemic began.

Though the recall hasn’t yet forced a referendum on Dunleavy’s actions, DeWitt said Dunleavy “did dial back on his agenda, and he did change course on some things because of the pressure put on him by the recall.”

Asked about the biggest difference between his actions last year and this year, the governor cited his outreach to the public.

Speaking about the 2019 budget and his decision to veto more than $400 million in state spending, Dunleavy said, “I assumed that folks understood the math was out of whack, but when I look back on it, I think the people of Alaska needed more of a why, an explanation.”

When the pandemic began this year, Dunleavy began a series of nightly news conferences streamed online and at times broadcast statewide by local TV stations.

“This pandemic — it was absolutely crucial — we shared, on a daily basis, what we knew,” Dunleavy said.

Some have said those appearances — which dwindled as case counts began to spike in June — are part of the reason for changing attitudes.

“I should’ve had — maybe not nightly appearances on the budget — but maybe explaining why the reductions are happening,” Dunleavy said, reflecting on 2019.

The governor said that even if the recall has slowed, he still expects a statewide vote.

If that goes against him, “I can live with the fact that I did what I believe was the best job, and I put every ounce of effort to getting Alaska through this process of the pandemic.”