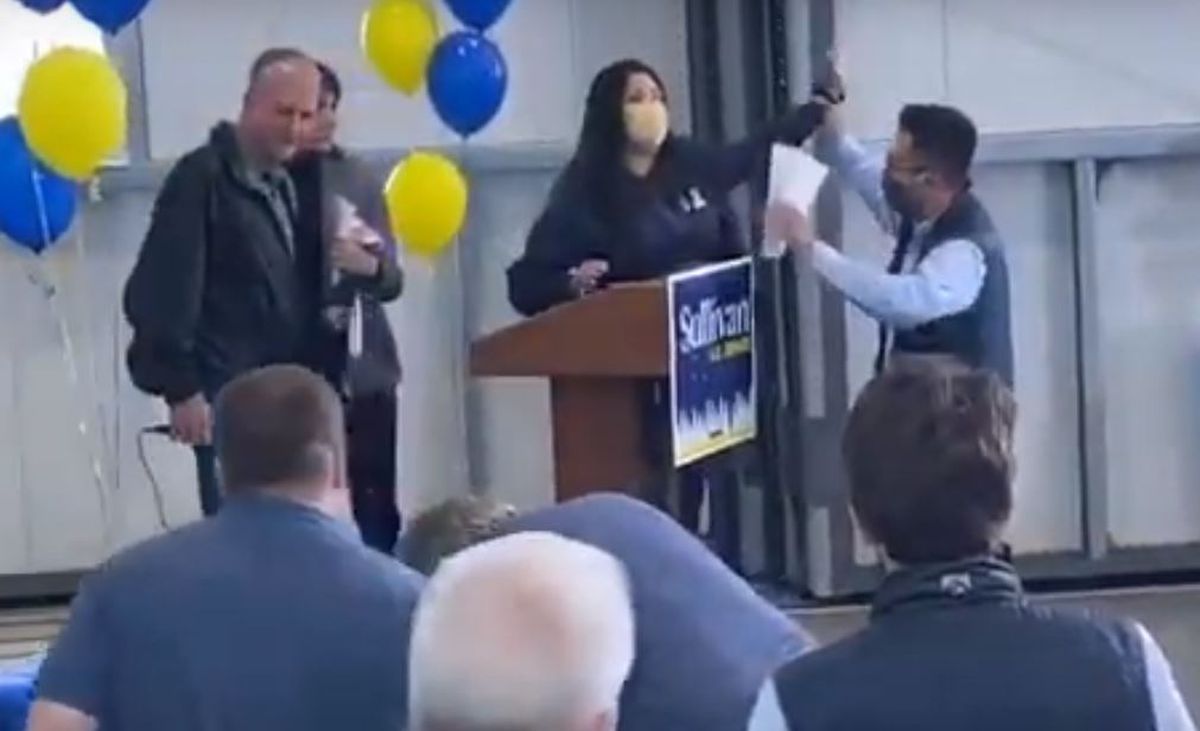 This still taken from a video shows Kathleen Bonnar confronting U.S. Sen. Dan Sullivan, R-Alaska, during a campaign launch event in Anchorage on Saturday, July 11, 2020. Attempting to restrain the protester is campaign manager Matt Shuckerow. Sullivan is at left, and a second protester is on the ground in the foreground. (Screenshot)

This still taken from a video shows Kathleen Bonnar confronting U.S. Sen. Dan Sullivan, R-Alaska, during a campaign launch event in Anchorage on Saturday, July 11, 2020. Attempting to restrain the protester is campaign manager Matt Shuckerow. Sullivan is at left, and a second protester is on the ground in the foreground. (Screenshot)

Protesters carrying a banner and a caribou heart interrupted a Saturday evening event in Anchorage that launched Sen. Dan Sullivan’s campaign for re-election to the U.S. Senate.

After the protesters were restrained and escorted out by campaign staff and attendees, they issued a written statement saying their protest was peaceful and they want to pursue assault charges. Sullivan’s campaign disagrees with their assertion.

“It was not a safe protest, it was not peaceful, it was in fact violent on the part of the protesters,” said Matt Shuckerow, Sullivan’s campaign manager.

Kathleen Bonnar, who carried the heart in a handbag, said events have blown up beyond what anyone intended.

“I think things just got really blown way out of proportion. None of us had any intention to be violent at all. We didn’t even expect the response we received at all,” she said.

A video first posted by the Alaska Landmine political blog shows a masked woman, later identified as Bonnar, walking toward Sullivan. Shuckerow moves to stop her, but a second woman in red, later identified as Crystal Berwick, rushes toward the stage and runs into Shuckerow, who has his hands up, asking Bonnar to stop.

Berwick falls to the ground after the collision, and Bonnar reaches into her handbag for an object. Shuckerow, who later said he feared what the object could be, restrained Bonnar, and the object — subsequently identified as the heart — slips from her hands onto the floor, leaving blood on Shuckerow and the stage. The protesters are then ushered out of the building.

At least two other women carrying a banner labeled “Heartless Sullivan” attempted to rush the stage during the confrontation but were also pulled outside. Their shouts were drowned out by supporters, who chanted Sullivan’s name.

After the event, Rina Kowalski of Fairbanks issued a written statement claiming responsibility. Last week, Kowalski was among protesters who hoisted a banner at a Fairbanks event launching Sullivan’s campaign there.

She said the intent in Anchorage was to present Sullivan “with a traditional gift ... meant to act as medicine to heal Sullivan’s heartlessness regarding Alaska Native issues.”

“If a bleeding caribou heart thrown at a sitting senator and his Athabascan wife is a gift, I don’t think that’s a characterization we would agree with,” Shuckerow said.

Bonnar said the heart fell from her hands when her arms were grabbed, and that’s why people may have thought she intended to throw it.

“I knew there was a risk, and I was really anxious, and ... this wasn’t like a pre-planned thing necessarily for me,” Bonnar said.

Kowalski said the other protesters were Will Bean, Erin Jackson, Bonnar and Berwick. The heart came from Samuel Johns, who did not attend the event. Bonnar said there was no connection to Al Gross, the independent who is Sullivan’s presumed opponent in the general election.

Kowalski said the protesters want to pursue assault charges against Shuckerow, Steve Strait and others at the event. Anchorage police could not be reached for comment on Sunday.

Those who attended the event said the protest was brief and took place just as Sullivan was preparing to take the stage.

“I came home and I didn’t even say anything about it to my husband. It just wasn’t that significant,” she said.

After the protesters left the event, red paint was smeared on several Sullivan signs and at least one car. Shuckerow said the campaign has photographic evidence that the protesters were involved and has forwarded that to the Anchorage Police Department.

“I don’t know anything about that,” Kowalski said.