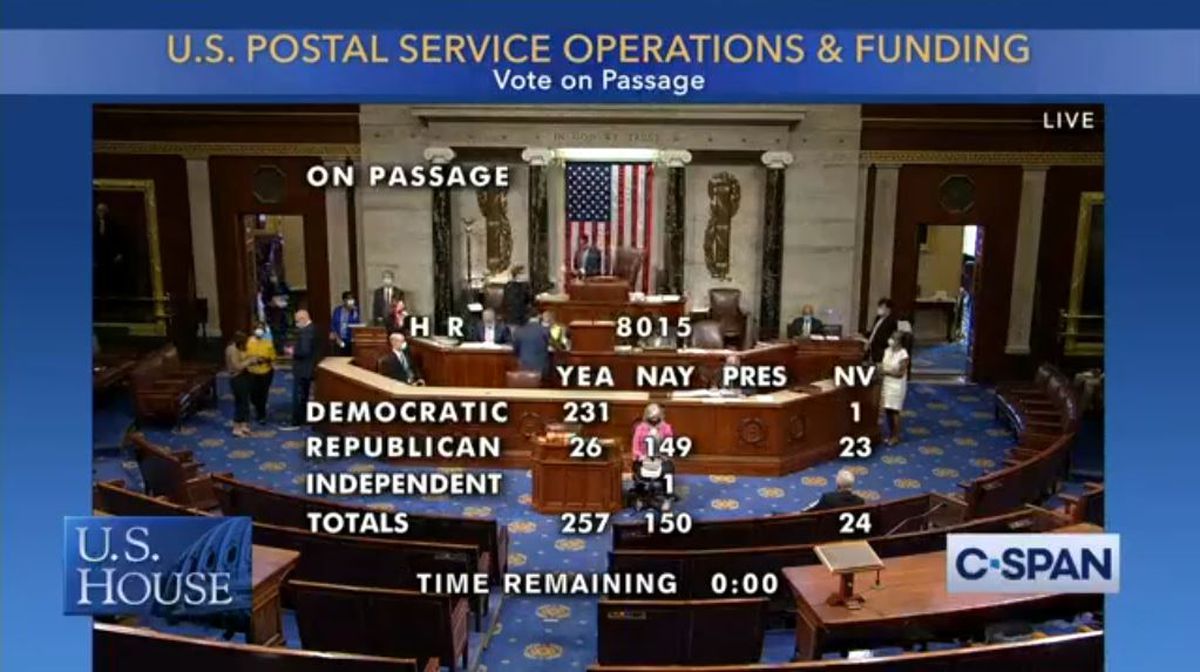 Rep. Don Young, R-Alaska, was one of 26 Republicans to vote in favor of the "Delivering for America Act," which passed the U.S. House on Saturday. (Screengrab via C-SPAN)

Rep. Don Young, R-Alaska, was one of 26 Republicans to vote in favor of the "Delivering for America Act," which passed the U.S. House on Saturday. (Screengrab via C-SPAN)

Alaska’s lone congressman in the U.S. House of Representatives voted on Saturday to approve Democratic legislation to oppose changes to the operations of the U.S. Postal Service.

The Delivering for America Act, introduced by Rep. Carolyn Maloney, D-N.Y., now goes to the Senate for consideration. President Donald Trump has said he will veto the bill if the Senate passes it.

Young was among 26 House Republicans who voted for the bill, which passed 257-150.

In remarks delivered by video, Young said, “We all know the Postal Service is one of our greatest institutions, and has been ever since we developed the Constitution.”

The bill provides $25 billion in coronavirus aid to the Postal Service and requires the federal agency to freeze service at levels it provided on Jan. 1, 2020. That would require Postmaster General Louis DeJoy to reverse recent cost-cutting measures, including controversial restrictions on overtime and changes to delivery procedures, until after the end of the year.

This week, DeJoy suggested Alaska’s bypass mail program, which officials from the state described as a crucial lifeline for rural Alaska, was “on the table” for cuts.

“He can’t do that arbitrarily,” Young said, explaining that eliminating the program would require congressional action.

“He’s been on the job only 60 days and doesn’t understand Alaska,” Young said, adding that he and the other members of Alaska’s congressional delegation wrote DeJoy a letter defending the program.

Young said the House-passed bill, if it becomes law, won’t solve all the problems facing the debt-burdened Postal Service.

“We are saving the post office temporarily, but without reform, we’ll have to come back and do it again,” he said.