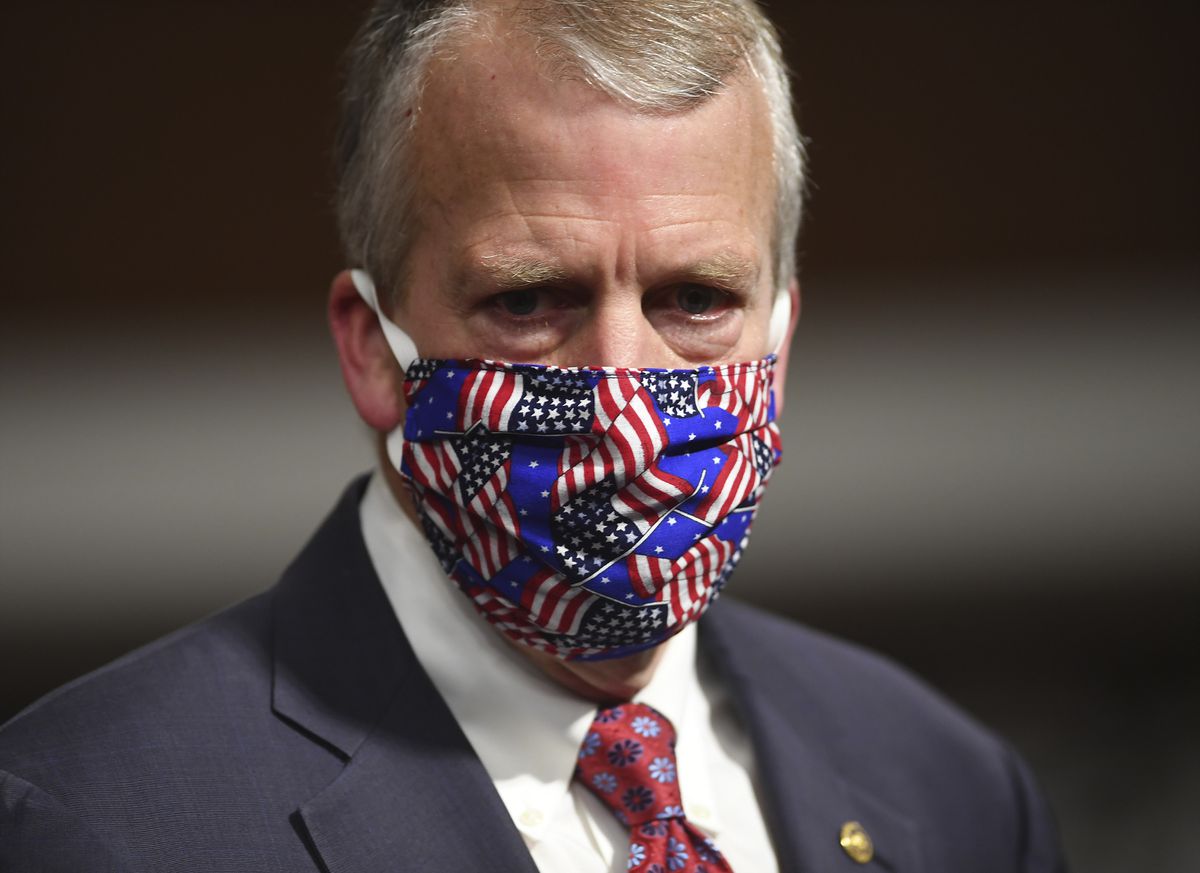 Sen, Dan Sullivan at a hearing in Washington on May 7, 2020. (Kevin Dietsch/Pool via AP, File)

Sen, Dan Sullivan at a hearing in Washington on May 7, 2020. (Kevin Dietsch/Pool via AP, File)

As congressional Republicans are once again being asked to weigh in on controversial statements from the president, Sen. Dan Sullivan on Thursday condemned white supremacy and said everyone else should do the same, following comments from President Donald Trump on Tuesday night that some saw as empowering a white supremacist group.

“I have consistently and unambiguously denounced white supremacy and expect all others to do the same," Sullivan said in a statement, which included past statements from him similarly denouncing white supremacy.

Trump instead said the group should “stand back and stand by."

The statement became one of the top news stories after the debate, drawing a quick rebuke from Republican leadership Wednesday. Senate Majority Leader Mitch McConnell said it was “unacceptable not to condemn white supremacists.”

The Proud Boys, a far-right group, took the comments as an endorsement, and overnight turned the statement into a rallying cry. This week, Amazon pulled clothing with Trump’s words and the Proud Boys' insignia from its online store.

On Wednesday, Trump was asked by reporters to clarify what he meant. He denounced white supremacy, and said he didn’t know who the Proud Boys are but that they must “stand down.”

The president’s comments reached Alaska’s tightening Senate race between Sullivan and Al Gross, an independent running with the Democratic nomination.

According to an account posted on Twitter from a CNN reporter, Sullivan was asked about Trump’s comments and if they hurt his chances of being reelected while he was getting on the Senate subway Thursday, and he didn’t respond before the subway doors shut.

That prompted Gross to tweet that Sullivan is a “coward.”

The Gross campaign also sent out a written statement attacking Sullivan for not commenting to the reporter.

“It’s appalling, but not unexpected, that Dan Sullivan is so scared of the President sending a mean Tweet about him that he refused to condemn white supremacy — what a disgrace," Gross said in the statement.

“Senator Sullivan makes it a point to stay clear of answering campaign questions in the hallway of the Capitol," Sullivan spokeswoman Amanda Coyne said Thursday.

On Wednesday, the Daily News asked Young about the debates, which he said were the worst he’d ever seen.

“I was deeply, deeply disappointed,” Young said in a phone interview. “In fact, I was so disappointed, I switched channels to kickboxing.”

Young said the biggest issue was Wallace, the moderator. He said Wallace asked Trump to respond to questions first too often, rather than switching back and forth between the two candidates.

When asked specifically what he thought of Trump telling the Proud Boys to “stand by,” Young said that question was getting beyond the debate.

“OK, all right, thank you,” Young said, before hanging up.

“Congressman Don Young, like the vast majority of Americans, believes that white supremacy is contrary to the ideals of the United States, which stands for liberty and equality for all,” Brown said in a statement.