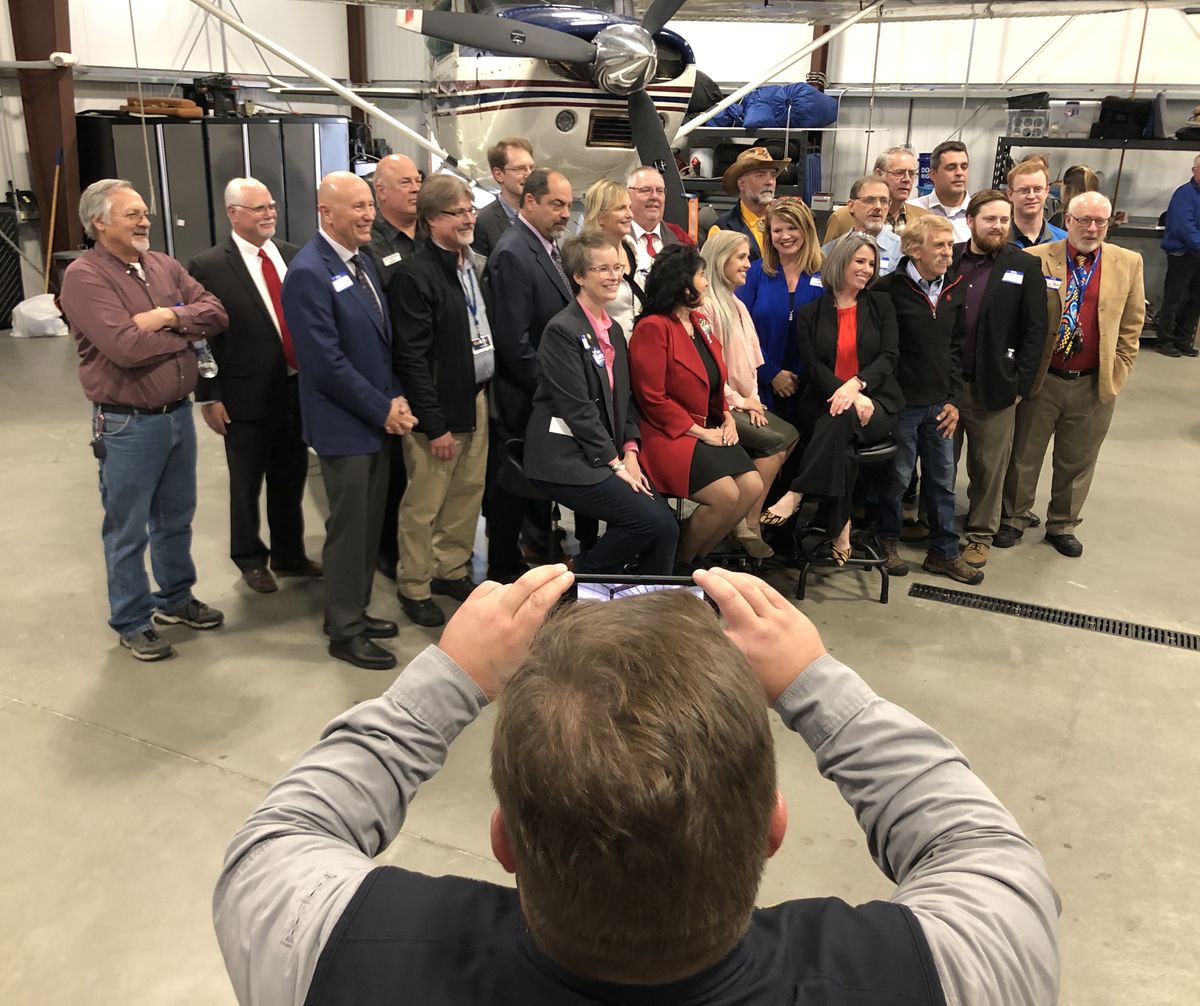 Republican candidates for Alaska’s House of Representatives gathered in an airplane hangar at Lake Hood Seaplane Base on the day before the president’s infection became public knowledge.

On Friday, Kenai Republicans welcomed U.S. Sen. Dan Sullivan to a fundraiser in Homer, holding their thumbs up side by side in a picture that spread on social media afterward.

No cases of COVID have been linked to campaign fundraisers this year in Alaska, a state health official said.

Alaska Democrats have canceled indoor gatherings and most outdoor events. Door-to-door campaigning has continued for candidates of all political leanings.

On Saturday, the state reported more than 100 new cases for the 10th consecutive day. It’s the longest such streak in the pandemic.

In a July 31 opinion article published in the Daily News under the headline “Only you can stop the spread of COVID-19,” Dunleavy, the state’s health commissioner, and the state’s chief medical officer encouraged Alaskans to stay six feet from people, avoid crowds and wear cloth face coverings. The advice reflects the state’s current public-health guidelines for indoor gatherings.

“If everyone — even those of us with no symptoms — makes a habit of wearing face coverings in public places and keeping our social units smaller for now, we can decrease the virus' transmission,” they wrote.

‘Choices best for them’

In the photo taken at the Kenai event, Sen. Peter Micciche, R-Soldotna, stood unmasked, side-by-side with Kelly Tshibaka, commissioner of the Department of Administration. Tshibaka’s agency is in charge of anti-coronavirus measures in state buildings.

“At these dinner events, everyone was informed and made choices best for them,” Tshibaka said by text message, explaining that she was speaking on behalf of herself and not the administration.

Tshibaka also attended the Lake Hood event without a mask.

“We should limit our risks,” she wrote, “but we also must learn to live with this virus until such a time as a vaccine is available. The goal has always been to flatten the curve, not to try to eliminate every case of coronavirus, which we know we cannot do unless we collapse our economy. We have done a great job of balancing that in this state. The leaders in our state have given us information and trusted us to make the best decisions to protect ourselves in any given situation.”

Micciche said attendees at the Kenai event took precautions but removed their masks for the photo and moved closer together. The Kenai Peninsula, he said, has had low numbers of COVID cases. Attendance at the fundraiser was limited, and some people participated online rather than in person.

“We are all trying to strike a responsible balance, which is a different calculation for each of us,” he wrote by text.

“Individual actions make a difference,” the Department of Health and Social Services says on its website. “From helping each other through earthquakes to clearing snow from a neighbor’s driveway, Alaskans take care of each other and have a strong sense of community. Wearing a face mask is another way to show you care and to protect those who are more vulnerable to serious illness.”

Behind Micciche and Tshibaka was U.S. Dan Sullivan, who held his mask in his left hand. His campaign manager, Matt Shuckerow, said the senator wore a mask for most of the event but took it off for the photo.

Sullivan was not at the Rose Garden event last week that has been linked with COVID-19 cases among Republicans and others, and the senator has tested negative for the virus, Shuckerow said. (State mandates require travelers to have a negative test to enter Alaska.)

Trump didn’t wear a mask in public until July and has mocked mask-wearing throughout the pandemic. During the first presidential debate, he said he wears them “when needed” and mocked Democratic candidate Joe Biden for consistently wearing them.

Earlier this year, a study found that the more Trump voters there are in a county, the less likely its residents are to be concerned by the virus. A nationwide survey in late July found Republicans were much less likely to view COVID-19 as a serious public health threat.

Republicans in other states have continued to hold events like those in Alaska, even after the president’s infection.

While campaigning door to door in Anchorage, Landfield used a computerized system that assigned an “affinity score” to voters in his district.

“The list I got, 100 is red-blood conservative Trump, and 0 is a Bernie Democrat,” he said.

At any home with a score at or above 80, the person who answered the door either didn’t care about COVID-19 or told him to take off his mask. At homes with scores below 20, he was told to wear his mask and stay far away.

“It became a predictable thing where I could tell how people felt based on the affinity score,” he said.

Why not wear a mask?

Rep. Lance Pruitt, R-Anchorage, organized the fundraiser at Lake Hood. The location — an aircraft hangar — was picked to allow more distance between attendees.

Pruitt wore a mask, removing it only during a speech, but most other attendees went without. Some members of the governor’s staff in attendance wore them, some did not.

He said he doesn’t know why Republicans are disdaining public health recommendations intended to limit the spread of COVID.

“I don’t know. I think for some people, it’s possible that it’s a freedom/liberty-type thing — don’t tell me what to do,” he said.

Support from our readers helps make in-depth reporting like this possible. Join others in supporting independent journalism in Alaska for just $13.99 a month.

Political polarization may be another factor, he said. Republicans are more likely to follow the president’s beliefs and ignore restrictions put forward by Democratic officials.

In Anchorage, Republicans flocked earlier this summer to Kriner’s Diner, a restaurant that defied public health restrictions imposed by the mayor, a registered Democratic voter. The diner lost a lawsuit over the city’s rules, but a second diner has appealed to the Alaska Supreme Court.

He also speculated that some Alaskans may not have seen severe enough effects to think precautions are warranted.

Sen. Josh Revak, R-Anchorage, held an in-person fundraiser at a supporter’s home on Friday night. He said that when he goes door to door, he hears more Alaskans dissatisfied with school closures and public health restrictions than he does about the virus itself.

“You can’t have the cure be worse than the disease,” he said. “Everyone I know who’s had it said they’d rather have coronavirus than the flu any day of the week. Not one of them said they experienced worse symptoms than the flu. I know that’s not the case with all the cases, though."

At his fundraiser, attendees were offered masks and hand sanitizer, and some of the event took place outdoors.

On Saturday, supporters of President Donald Trump gathered for a convoy-style rally that drove from the Anchorage Cabela’s store to the VFW hall in Wasilla.

Pastor Dusty Faulkner offered a prayer asking for the “pestilence” to be lifted from the president.

Speaking afterward, he said he “hit my knees” in prayer after hearing that Trump had been infected.

Asked about masks and social distancing, he said, “I don’t think that we know enough” to say what might or might not prevent its spread.

Other attendees said they don’t trust what they hear from public health officials.

For the seven months of the pandemic, Alaska’s COVID death rate is higher than its 2018 death rate for influenza.

Alaska does not mandate masks, but some cities and boroughs, including the municipality of Anchorage, do require masks indoors in public. A public health mandate in effect since June 29 says, “All individuals must wear masks or cloth face coverings over their noses and mouths when they are indoors in public settings or communal spaces outside the home.”

Since late August, the city has limited indoor gatherings to 30 or fewer people, but enforcement is based on venue, which makes it ineffective for one-off events.

Clinton Lasley of the Department of Health and Social Services said no cases of COVID-19 have been linked to campaign fundraisers in Alaska, and the state isn’t offering any specific guidance for them.

“There have been a variety of types of community events in recent months. Because virus circulation of COVID-19 varies in each community, planners and organizations of events should make adjustments to meet the unique circumstances of the event and community,” he said Sunday.

Reporter Morgan Krakow contributed to this article from Anchorage.