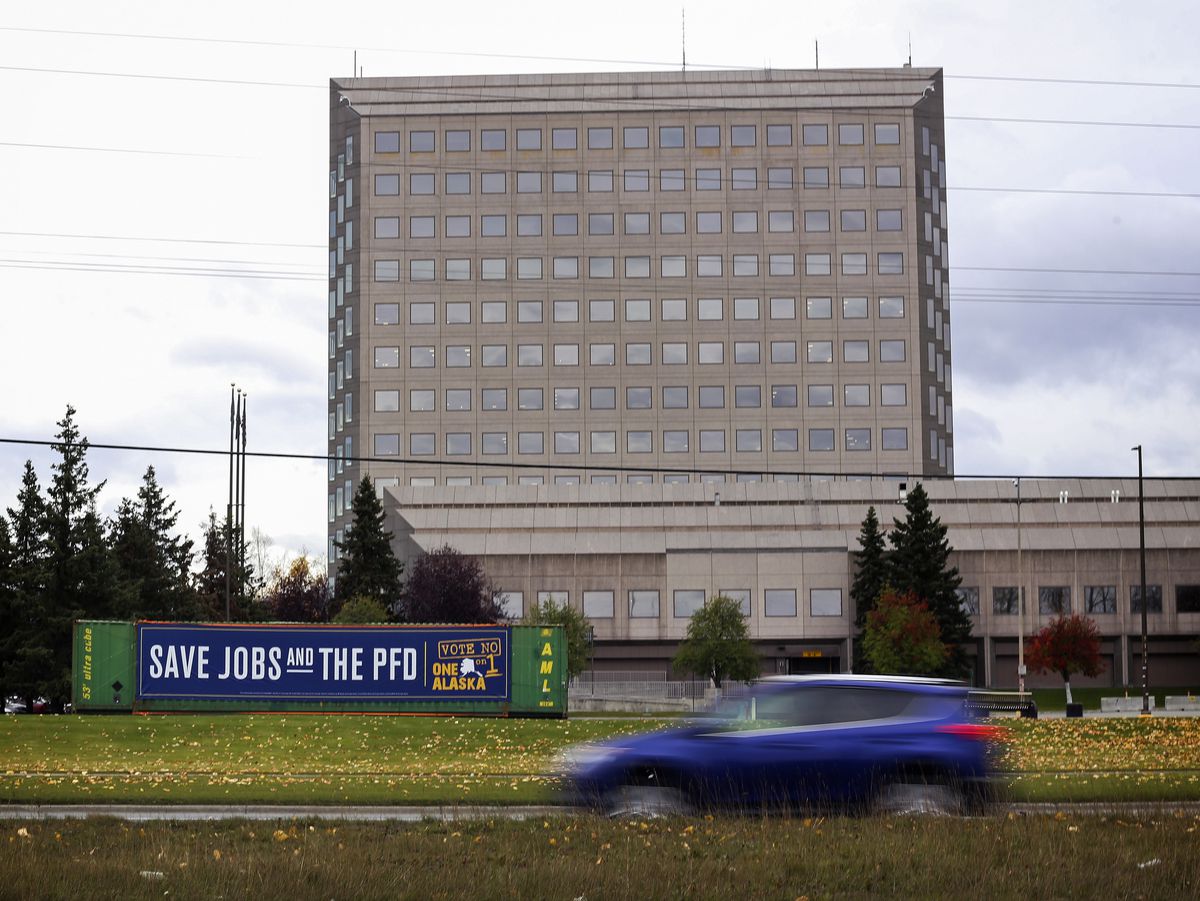 Cars pass by a roadside sign opposing Ballot Measure 1, which proposes an oil tax increase, on the side of a shipping container outside 900 E. Benson Ave. in Anchorage on Oct. 8, 2020. (Emily Mesner / ADN)

Cars pass by a roadside sign opposing Ballot Measure 1, which proposes an oil tax increase, on the side of a shipping container outside 900 E. Benson Ave. in Anchorage on Oct. 8, 2020. (Emily Mesner / ADN)

Anchorage drivers have likely seen the supersized banners off the Seward Highway and other roads with the message, “Save Jobs and the PFD, Vote No on 1."

Several are draped over semi-truck trailers, and often on private property, including on the grounds beneath the 15-floor former BP building east of the Seward Highway in Midtown.

The state wants them removed.

The Alaska Department of Transportation on Friday said it’s sending letters to property owners and the OneAlaska group that paid for the signs, asking them to take them down, officials with the agency said.

The signs' placement and size indicate that they’re “designed to distract drivers,” said Shannon McCarthy, a spokeswoman with the state transportation agency.

OneAlaska is leading the fight against the citizen-led proposal for an oil production tax increase, Ballot Measure 1. The group is being funded primarily by the oil companies that the proposed tax increase targets, ConocoPhillips, ExxonMobil and Hilcorp Alaska.

Kara Moriarty, campaign manager for OneAlaska and head of the Alaska Oil and Gas Association, said Friday afternoon that the group had not received the letter. She said the group believes it has complied with all laws, and will review the letter when it arrives.

Moriarty said with fairs and other public events canceled because of the COVID-19 pandemic, the group has had to find unique ways to reach voters this season.

Moriarty, a leader of the 2014 “no” campaign that won the last oil tax fight at the ballot box, said her side used big truck signs during that campaign season without any issues.

But she said the group is using more of the large signs this year.

“We have to be creative, but we’ll do it within the letter of the law,” she said.

They’re illegal under the anti-billboard law passed by Alaska voters in 1998, McCarthy said. Also, the state is required to remove distractions along roadsides under a charter with the federal government.

Finally, a court battle challenging the billboard law in 2018 led to a settlement supporting the state prohibition on large billboards too close to roads and the state’s right to maintain and manage the right-of-way, McCarthy said.

Two of the big signs are illegally placed in the right-of-way, McCarthy said. Seven others are on private property.

Campaign signs that are 4 feet by 8 feet are the maximum allowed on private property within 660 feet off the road, McCarthy said.

The big banners are too close.

Technically, the property owners have 30 days to remove the signs or be fined, after receiving notice. The penalty can reach up to $5,000.

But the state is not mentioning the fines in the letter, McCarthy said.

The signs could stay up past the Nov. 3 election date without a financial penalty.

The letters are meant to be educational tools, McCarthy said.

“We’re appealing to people’s civic pride and responsibility," McCarthy said. “There are good reasons why we have these rules.”

“I’ve seen a couple myself and I was distracted while I was driving,” she said. “I got my eyes back to the road quickly.”

The agency declined to send copies of the letter to a reporter, citing an active enforcement action.

McCarthy said the number of large signs this year is unusual.

“It was a different problem two years ago, when we had such a proliferation of 4-by-8 signs at intersections,” she said.