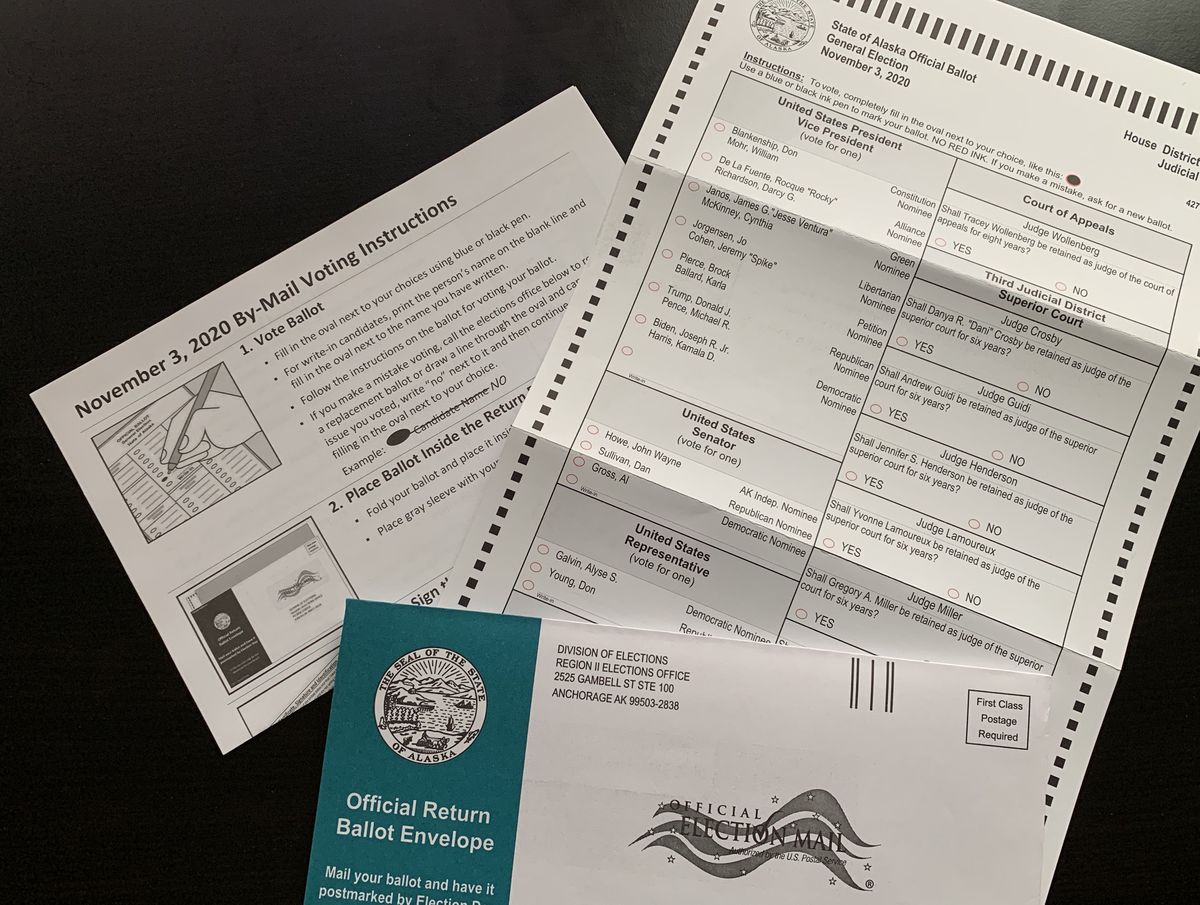 An absentee ballot for the 2020 Alaska general election. (ADN)

An absentee ballot for the 2020 Alaska general election. (ADN)

Alaskans will soon see TV ads, hear radio announcements and watch as banners on the sides of city buses proclaim the result of an Alaska Supreme Court decision.

On Monday, the state’s high court confirmed that Alaskans do not need to have a second person sign their absentee ballots as a witness. “Improper or insufficient witnessing” has been the No. 1 reason for rejecting absentee votes in the past three state primaries, state records indicate.

A record 115,000 Alaskans had requested absentee ballots by Tuesday morning, and it’s too late to rewrite the instructions written on each of those ballots. Instead, under a court order, the state will launch an advertising campaign to let Alaskans know about the change.

Any Alaskan can request an absentee ballot, but if a voter wants to receive a blank ballot by mail, they must ask for it by Oct. 24.

Until this week’s decision, state law required voters to sign their absentee ballot and have that signature verified with a second signature from a witness at least 18 years old. A group of Alaskans sued, saying the requirement doesn’t make sense during the COVID-19 pandemic, and judges agreed.

Elections officials are now required to make posts on social media, advertise on TV and radio, send a mailer to everyone who has received an absentee ballot, and email everyone who applied for a Permanent Fund dividend this year. The email was sent Tuesday afternoon.

“That’s just some of the things, because I’m sure there’s probably going to be more we’re going to be doing and making sure people know about it,” said Tiffany Montemayor, the communications manager for the Division of Elections.

In addition to the ads required by the order, the division is planning to run ads on the sides of city buses in Anchorage and Fairbanks and “digital ads in all of the major airports,” she said.

Montemayor said she wasn’t sure when voters will receive mailed messages, but the radio announcements could begin as soon as tomorrow: Elections officials sent public-service announcements to radio stations on Tuesday.

Monday’s decision could affect the results of close-run elections.

In August, the Republican primary for Anchorage’s House District 23 was decided by four votes. Thirty-two absentee ballots in the district were rejected by the state for various reasons.

Statewide, more than a third of the 1,240 absentee ballots rejected during the August primary were disqualified and not counted because of the suspended rule. Those ballots were never opened, and there’s no way to tell whether they would have changed the result.

In addition to informing Alaskans about the change, the state will also have to combat election disinformation. The state’s leading Republican blog incorrectly stated that removing the signature requirement amounts to “throw(ing) out election integrity."

Though the witness signature requirement was intended to detect fraud, state attorney Laura Fox was unable to cite a case in which the requirement was used to do so. Despite an accusation of voter fraud against a state legislator earlier this year, confirmed cases of voter fraud are rare in Alaska and nationwide: Only three cases have been found in Alaska since 2005.