Alaska campaigns expect some election results to shift as remaining ballots are counted. They disagree how much. 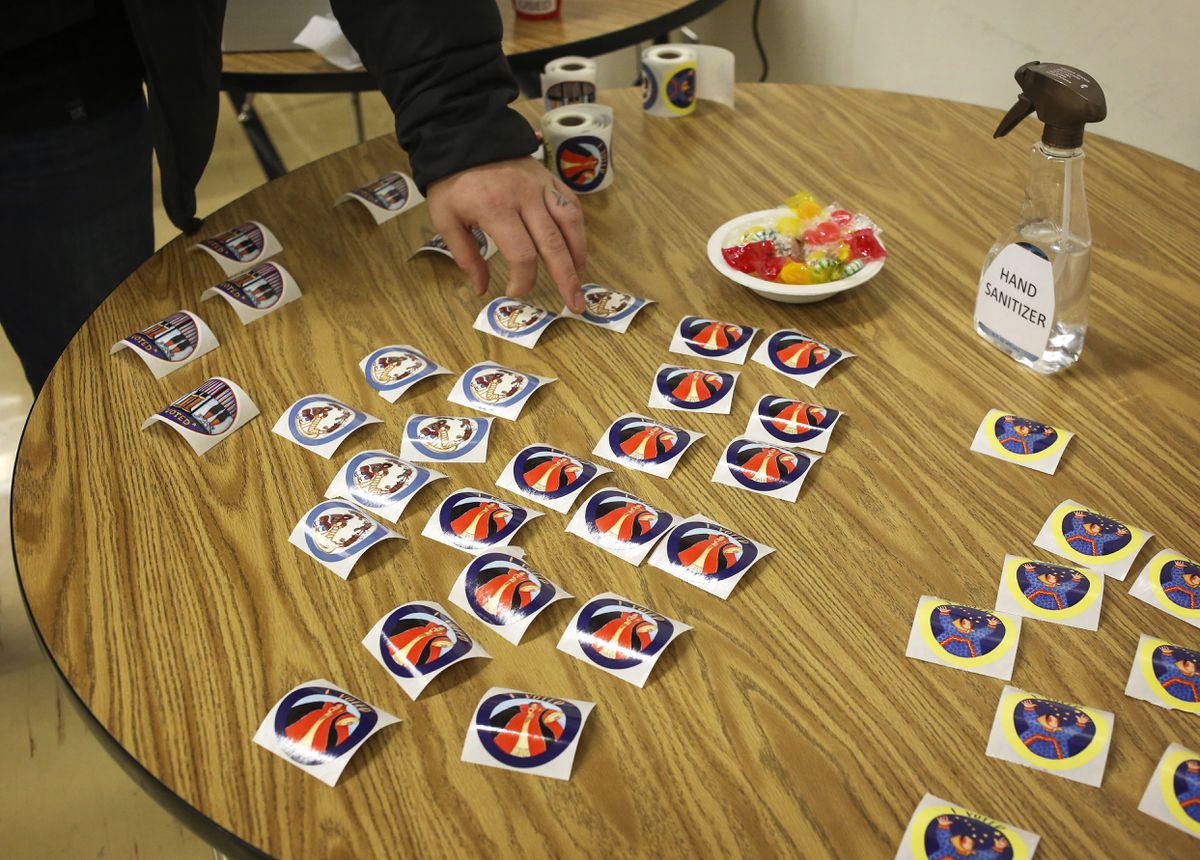 A man chooses an "I Voted" sticker after casting his ballot at Campbell Elementary School, a polling location in Anchorage, for the 2020 general election on Nov. 3, 2020. (Emily Mesner / ADN)

A man chooses an "I Voted" sticker after casting his ballot at Campbell Elementary School, a polling location in Anchorage, for the 2020 general election on Nov. 3, 2020. (Emily Mesner / ADN)

With 60% of Alaska’s votes counted on Tuesday, early results show Republicans winning by hefty margins in statewide and legislative races.

As officials from both parties pored over data Wednesday, they said that 130,000 uncounted absentee and early votes will likely lean away from Republicans and diverge from the results so far. Those votes will be counted starting next week.

Anchorage Democratic Sen. Bill Wielechowski currently trails Republican Madeline Gaiser 51% to 49%, but as he looked at the remaining votes in the East Anchorage district, he was confident of victory.

“I think I’m going to win either by 800 or 1,000-1200,” he said, calling the remaining votes in his race “overwhelmingly Democratic, overwhelmingly progressive.”

Gaiser did not return a phone call seeking comment. A message left with her campaign treasurer also was not returned.

[Photos: Alaskans campaign and vote in the 2020 general election]

On Wednesday, Gross posted a video on social media saying that with more than 40% of votes yet to be counted, he still believes he will win his challenge to Sullivan.

To do so, the Gross campaign needs to win a majority of the remaining votes.

Most of those ballots are absentee, which Gross will do well with, said campaign manager David Keith. Keith declined to say how many of those votes the campaign believes Gross needs.

“There’s a range of numbers that I’m not going to divulge,” Keith said. “There are some very solid paths in the absentee vote for Al Gross to come out ahead of Dan.”

Keith said the initial wave supporting Sullivan isn’t a surprise. The campaign always expected to do well with mail-in voters.

“I don’t find it surprising that the president’s party voted on Election Day,” he said. “The leader of their party had been telling them for a very long time that voting by mail was not legitimate.”

The remaining 60,000 are undeclared and nonpartisan voters.

“Al Gross would have to take virtually all of those votes,” Shuckerow said.

In the state House, five incumbent Democrats are trailing Republican opponents, and among state Senate incumbents, only Wielechowski is behind.

Republican state Rep. Lance Pruitt has a 61% to 38% lead, or 1,092 votes, over Democratic challenger Liz Snyder. There are at least 3,900 ballots to be counted in that race.

“I actually feel very good about it,” he said.

The Division of Elections regularly posts a list of Alaskans who have requested absentee ballots or who have voted early.

When he looks at the remaining ballots in his district, Pruitt examines the party registrations of the voters who requested those ballots. Republicans, he assumes, are voting for him. Democrats, he thinks, will go for Snyder.

That leaves undeclared and nonpartisan voters, who account for about half the uncounted ballots in his district and most of the ballots statewide.

Though these voters don’t have an official registration, Republican and Democratic officials have built vast databases that allow them to apply a “partisan affinity score” to each voter, listing whether that person is more likely to vote Democratic or Republican.

Sen. Tom Begich, who won re-election unopposed, said that when he combines a list of uncounted ballots with the Democratic database, he sees that between 55% and 70% of the remaining votes will lean away from Republicans, depending on the legislative district.

Though several incumbent Democrats are currently trailing, he thinks that will change.

“In terms of House members, it looks like virtually all — if not all — of the incumbent members of the House majority will win their elections,” he said, and four Republican incumbents could end up losing.

Pruitt said he agrees with part of Begich’s analysis. A 55% to 70% lean “is probably a good estimate," he said, though he believes either Kathy Henslee (leading Anchorage Democratic incumbent Rep. Chris Tuck) or Kevin McKinley (leading Fairbanks Democratic incumbent Adam Wool) could hold on for an upset.

As far as Republican incumbents possibly losing, he and Begich both believe Rep. Mel Gillis (currently ahead of independent challenger Calvin Schrage) is the most in danger.

“I do think that Mel and Kathy, they’re sitting in a good place, but it’s going to be close. If they win, they’re not going to win with hundreds of votes of lead,” Pruitt said.