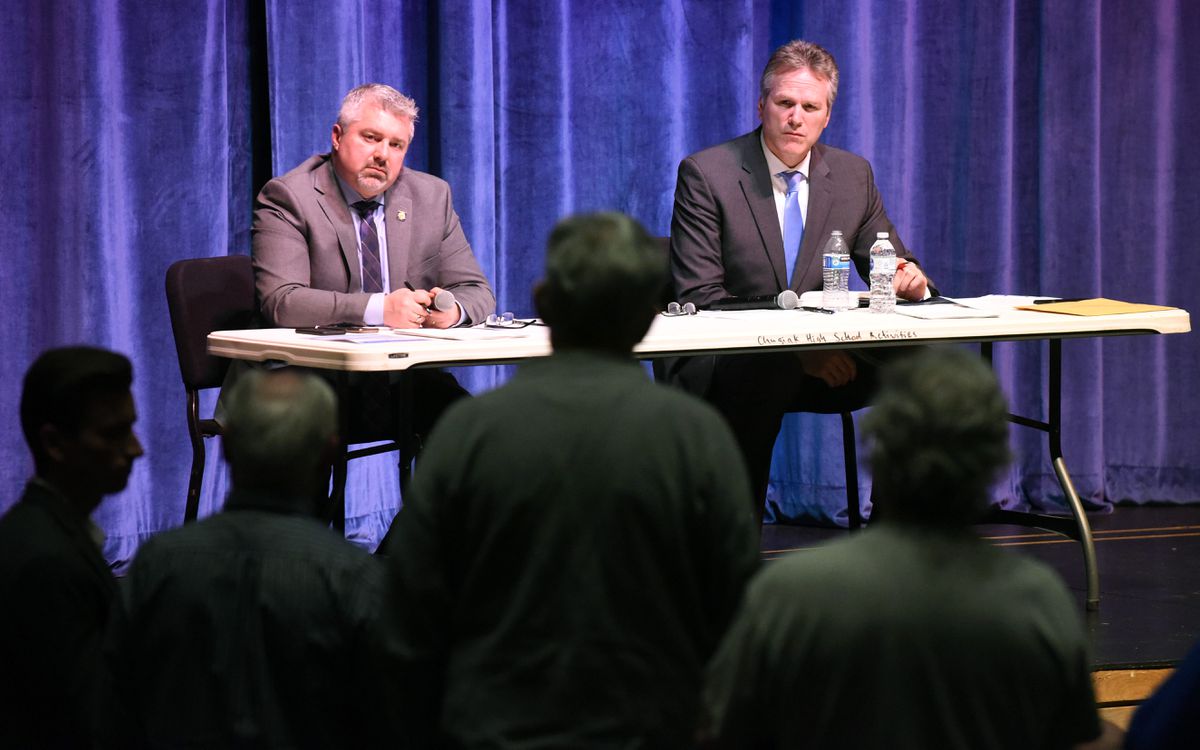 In this file photo, Alaska Gov. Mike Dunleavy, right, and Dunleavy director of communications and community outreach Dave Stieren listen to a comment during a town hall meeting at the Steve Primis Auditorium at Chugiak High School on March 2, 2020 in Chugiak. (Matt Tunseth / ADN archive)

In this file photo, Alaska Gov. Mike Dunleavy, right, and Dunleavy director of communications and community outreach Dave Stieren listen to a comment during a town hall meeting at the Steve Primis Auditorium at Chugiak High School on March 2, 2020 in Chugiak. (Matt Tunseth / ADN archive)

As the state of Alaska urges people to make sacrifices to slow the rapid spread of COVID-19, Gov. Mike Dunleavy’s director of communications and community outreach told friends and family to gather and party.

“Monday night, go to your favorite bar and party like it’s New Year’s Eve,” Dunleavy outreach director Dave Stieren wrote Thursday on his personal Facebook page. “Dress up. Uber. Whatever. Do it.”

The mixed messages highlight an ongoing contrast between local and state approaches to preventing the spread of the coronavirus, and even the public statements of state government versus the private actions of state leaders.

State officials did not respond to repeated requests for an interview regarding Stieren’s posts. On Monday, Dunleavy spokesman Jeff Turner said in a statement that “Dave Stieren’s comments were made on his personal social media accounts and are his own personal opinions. Those comments do not reflect the policies of the Dunleavy administration regarding COVID-19.”

Turner did not answer a list of questions, including why the public should see Stieren’s Facebook posts as severed from his role as communications director.

Stieren’s post came a day after Anchorage Acting Mayor Austin Quinn-Davidson announced that she planned to close bars and restaurants to indoor service on Tuesday in hopes of slowing the spread of the coronavirus.

On Nov. 24, the state reported a record 13 deaths and on Nov. 25 recorded the second-highest single-day case count up to that point. A total of 120 Alaskans with COVID-19 have died. Alaska health department officials say the true number of cases may be higher as the influx of new cases has overwhelmed the ability to update the database in a timely fashion.

Finding the balance between prioritizing public safety and upholding civil liberties has become a difficult task for politicians in Alaska and nationwide. Former Anchorage Mayor Ethan Berkowitz’s four-week shutdown of bars and restaurants in August spurred upheaval as groups protested him near-weekly at Assembly meetings, calling him fascist and a dictator.

This fall, COVID-19 hit new heights, getting dire enough that on Nov. 12, Gov. Mike Dunleavy used the state emergency alert system to call on Alaskans to help contain the virus, which was spreading at “unprecedented” rates. Dunleavy said that if too many people performing critical jobs — such as trauma nurses, police officers and paramedics — get the virus, it could impede response to emergencies in Alaska.

Dunleavy said the next few weeks were “critical” and called on local governments to take action to protect their workforce and communities. He asked that people celebrate the holidays differently this year and return to the mindset Alaskans had in the spring, when the state ordered businesses to close due to the virus.

Dunleavy has resisted imposing a statewide mask mandate or closing businesses down a second time. He has said he favors local governments deciding what works for them.

Stieren at some point edited his recent Facebook post to add a line saying, “Or pay a tab that you’d have IF you would go out.” He also posted to Facebook that Quinn-Davidson’s order would cause panic, an increase in cases and the death of the Anchorage economy.

He then posted to the Hideaway Club’s Facebook page, saying, “Since the Mayor is killing us, New Year’s Eve Party Monday the 30th at the Hideaway? The answer, of course, is yes.”

A city spokeswoman did not immediately provide a response to questions. Stieren did not respond to questions or interview requests.

His posts quickly gained traction on social media, where people — many of whom are critical of Dunleavy and his administration — attacked his comments.

Stieren, who in early March referred to the coronavirus on social media as the “beer virus,” on Thursday responded to the outcry with a tweet of his own. “Checking screen shots of my Facebook on Twitter,” he wrote, posting a gif of actor Ray Liotta laughing hysterically in a scene from the movie “Goodfellas.”

When the state health department on Friday held a media briefing where public health officials discussed the state’s inability to keep up with soaring coronavirus cases, a department spokesman, Clinton Bennett, refused to answer questions about Stieren’s remarks and how they compare to the state’s public health messaging.

“You are asking about a governor’s office employee and his personal social media account,” Bennett said. “I would recommend reaching out to them, or reaching out to him specifically for that.”

Stieren is a former conservative talk show host for KFQD in Anchorage, and in 2019 was hired as communications and community outreach director at a salary of $135,000.

At the time of his hiring, Dunleavy said, “Mr. Stieren will serve as the bridge between Alaskans and this administration. He will be an effective combination of communication and outreach.”

The state has reported 31,323 cases among Alaskans so far, resulting in 710 resident hospitalizations. Deaths, hospitalizations and case rates have increasingly risen since July, and most of the state is at a “high alert” level. On Monday, Alaska’s seven-day average per capita case rate was the eighth-highest in the nation.