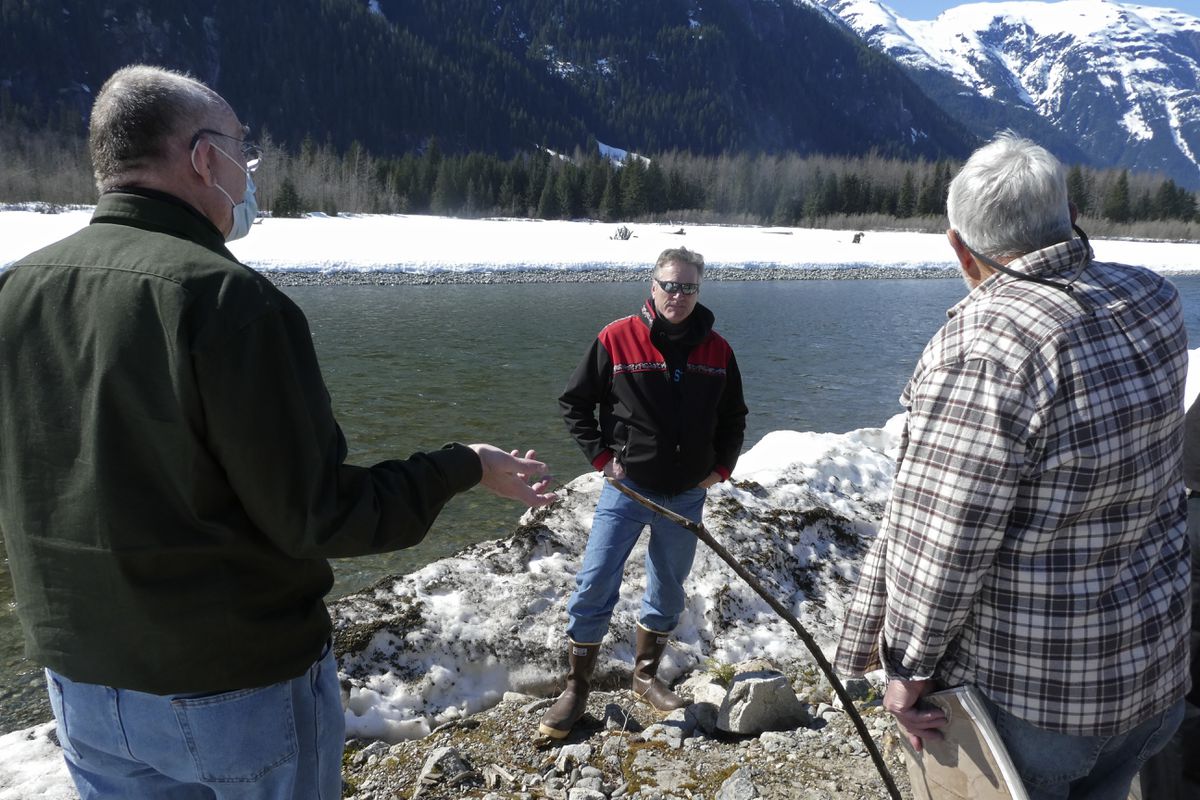 Alaska Gov. Mike Dunleavy, center, listens as residents discuss a levee they have concerns with on Thursday, April 22, 2021, in Hyder, Alaska. Hyder was among the southeast Alaska communities that Dunleavy visited as part of a one-day trip. (Becky Bohrer / Associated Press)

Alaska Gov. Mike Dunleavy, center, listens as residents discuss a levee they have concerns with on Thursday, April 22, 2021, in Hyder, Alaska. Hyder was among the southeast Alaska communities that Dunleavy visited as part of a one-day trip. (Becky Bohrer / Associated Press)

METLAKATLA — Drummers and singers welcomed Alaska Gov. Mike Dunleavy to Metlakatla, with some blowing fluffy white eagle feather down — symbolic of spreading peace in Tsimshian culture — before he went to a meeting with tribal leaders on the only Indian reserve in Alaska.

In Hyder, a tiny Southeast Alaska town on the border with Canada, Mark and Amy Bach invited Dunleavy to their house, where they had brownies waiting and most of their 12 children who live at home broke out instruments and sang for him.

In Ketchikan, diners wanting to say hi or get a photo stopped by Dunleavy’s table as he ate breakfast with Alaska’s chief medical officer, Dr. Anne Zink, and the area’s state senator.

In a trip aimed in part at promoting signs of re-emerging normalcy amid the coronavirus pandemic, Dunleavy visited the three Southeast Alaska communities in one day last week, taking advantage of a streak of sunny weather in a region notorious for its rains for a journey that included floatplane travel.

The Republican governor tested positive for COVID-19 in February and has spent most of his term under threat of a recall effort. He cited increasing vaccine rates and efforts to manage the pandemic in seeking to move the state toward getting back to normal, including resuming trips like the one last Thursday.

“You have to start getting out,” Dunleavy said, adding that issues the communities faced related to the pandemic and infrastructure also factored in to the decision. Hearing from people face-to-face is different than getting a letter, he said.

Ketchikan, which relies heavily on tourism, faces a second summer without stops from large cruise ships. Metlakatla officials are seeking to advance an electrical transmission project and Canadian travel restrictions have affected Hyder, whose only road access is through Canada. Dunleavy and Zink brought COVID-19 vaccines to share with residents of Stewart, British Columbia, a couple miles over the border from Hyder.

The trip also showed the challenges of getting around a state where most communities lack road access in or out.

Dunleavy flew on Alaska Airlines about 230 miles from Juneau to Ketchikan, where he met with area leaders.

Dunleavy then had to fold his 6-foot-7-inch frame into the front passenger seat of a floatplane — joking he needed a shoehorn to do so — for a roughly 75-mile flight to Hyder over snowy, mountainous terrain. From Hyder, he took the floatplane, which carried seven people, to Metlakatla and later back to Ketchikan. By the time he returned to Juneau, about 14 hours had passed.

Dunleavy said his trip illustrated how Alaska is “an amazing place” and told The Associated Press he is considering seeking re-election next year, even as opponents continue gathering signatures to try to force a recall election fueled early on by anger over budget vetoes and proposed cuts. Dunleavy gave no timetable for making a decision on whether to seek re-election, saying his focus has been on the pandemic and the state’s economic recovery.

“But I know that decisions have to be made and people need to know what my future’s going to hold. So, I’ll let people know soon,” he said.

Leaders in Ketchikan and Metlakatla, communities only accessible by air or water, brought up concerns with the state-run ferry system that many residents rely on, including ticket costs on boats that spike as the number of booked passengers rises.

During Dunleavy’s first year in office in 2019, he proposed deep cuts to the ferry system as part of a broader plan to cut state spending that put him at odds with legislative leaders and drew public outrage. The impact of cuts that were made to the system were compounded by other issues, including maintenance needs within the fleet, resulting in limited service to some communities.

Dunleavy and legislative leaders said they are working on plans to bring more reliability in scheduling to the system.

Leaders of the Alaska House’s bipartisan majority have said there is better communication with Dunleavy’s office this year and he agreed there is a different dynamic.

“We’ve been hit with a pandemic and an economic meltdown, the likes we’ve never seen. It’s ... all hands on deck for Alaska,” he said.

At The Landing Restaurant in Ketchikan, John Judson and his daughter, Jasmine Pattison, stopped by Dunleavy’s table to say hi. Pattison, a recent nursing program graduate, was excited to meet Zink, one of the public faces of Alaska’s COVID-19 response.

“As a woman leader, she’s been fantastic,” Pattison said, adding later: “It’s really great for a lot of us nurses to be able to look up to that.”

In Hyder, estimated population 70, residents met Dunleavy at the floatplane dock and then drove him around, including to the U.S.-Canada border to meet Stewart’s mayor and to a levee that several said needs attention.

Paul Larkin, with the Hyder Community Association, called the visit “probably one of the biggest ones we’ve ever had” by state officials.

One of the Bachs’ children was waiting outside their house as the pickup carrying Dunleavy pulled up. Amy Bach, who said her family is involved in ministry work, said they wanted to show their hospitality.

“We’d have had him for dinner if they had time,” she said.

Dunleavy joked with the kids about how he could hit his head on the ceiling’s low-hanging beams and asked questions about the house. The Bachs, after two songs by the kids, sent Dunleavy off with a bear painting and brownies for the road.

He was greeted warmly, too, in Metlakatla, where he received a welcome in the Tsimshian language. As he made his way up the dock ramp to the street level with Metlakatla Indian Community Mayor Reginald Atkinson and others, the singers and drummers performed.

“It’s been a while since a governor has come to Metlakatla, and you are more than welcome,” Atkinson told Dunleavy at the start of his meeting with tribal leaders. Dunleavy later was given gifts that included a talking stick.

Atkinson said the tribe’s relationship with the state had “kind of faded,” saying the tribe and state had been “kind of inactive in collaborating.”

The tribe is “looking forward to a renewed relationship with the state of Alaska,” he said.