Alaska House and Senate propose competing boosts to schools funding. Can they agree? 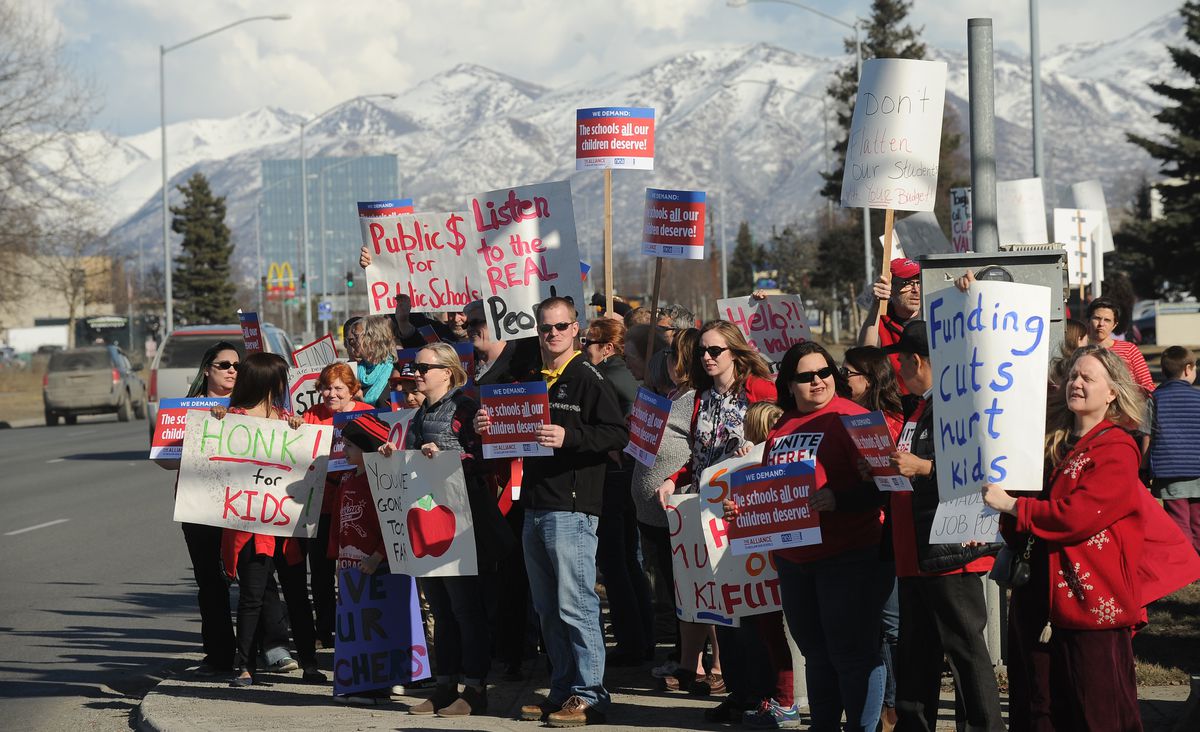 About 200 people gathered at the Legislative Information Office to advocate for increased funding for schools in Anchorage on Friday. (Bob Hallinen / ADN)

About 200 people gathered at the Legislative Information Office to advocate for increased funding for schools in Anchorage on Friday. (Bob Hallinen / ADN)

JUNEAU — The Alaska Legislature's end-of session talks have veered toward the state's public schools budget, with both the Senate and House majorities advancing plans that could boost education spending.

But a new proposal passed Saturday by the Senate suggests the cuts are less important than finding a new revenue source to fill the $2 billion hole in Alaska's $4.5 billion budget.

The new Senate plan — a rewritten version of House Bill 287 — offers a $30 million boost to schools two years from now. But the increase comes only if the state House agrees to a long-term plan pushed by the Senate to fill the majority of the deficit with investment earnings from the $65 billion Permanent Fund.

The largely-Democratic House majority has been pushing to increase schools spending this year. But its members have resisted the Senate's Permanent Fund plan, saying the resulting decrease to Alaskans' dividend checks would be unfair to low-income residents.

With the Legislature's initial deadline to finish its work arriving Sunday, lawmakers described the Senate's new education proposal as an effort to strike a deal.

The question, she added, is "whether it's the right combination of those things."

While Sunday is the 90th day of the session, the deadline for adjournment set in a 2006 citizens initiative, legislators have routinely extended their work beyond that in recent years under a 121-day limit in the Alaska Constitution.

There is now wide agreement among lawmakers that the session will continue beyond the weekend.

The new focus on schools in Juneau came as some 200 advocates rallied in support of higher education spending Friday evening in Anchorage, in front of the Legislature's office building. Education advocates also rallied Saturday afternoon outside the Capitol.

Two administrators in Sitka, meanwhile, said they spent Friday glued to live internet feeds of legislative proceedings, which came after they made a lobbying trip to Juneau earlier in the week. Lawmakers seemed to come away with a new appreciation for schools' plight, said Mary Wegner, Sitka's superintendent.

"I felt like people really heard us and understood what we were saying in a way that I have not seen in the last couple of years," Wegner said. She added: "Now, we just need the money."

Education is the largest single line item in Alaska's operating budget, at about $1.25 billion, and it's faced new scrutiny amid the deficit crisis.

[Related: Here's what flat funding has meant for Alaska's schools]

School district officials around the state say they're being forced to cut teachers and programs to accommodate rising costs for things like employee health care and utilities.

One, which passed the House in February, would separate Alaska's schools spending from the Legislature's full annual operating budget.

Majority members said they want to pass the legislation, House Bill 287, before the annual budget to give Alaska school districts more time to draft their own spending plans.

The Legislature's delays in passing budgets in the past three years have forced some districts to issue layoff notices to teachers, then — in some cases — revoke them.

Later in the session, the House advanced separate legislation, House Bill 339, to boost the per-student budget by $100, to $6,030 — an increase of 1.7 percent. That legislation passed the House in a 22-18 vote Saturday.

The House's vote Saturday also drew the endorsement of Gov. Bill Walker, who said he hopes to see the per-student budget bill on his desk before the end of the session.

"Parents and teachers deserve certainty that Alaska schools will be funded consistently every year," a prepared statement quoted him as saying.

The Senate majority — which last year unsuccessfully pushed a 5 percent cut to schools — showed little interest in the House's proposals this year.

Instead, they've pushed legislation to try to spend state cash more efficiently, like by enhancing schools' internet access and encouraging districts to consolidate.

The Senate majority has not advanced a parallel measure to the House's proposal to boost the per-student formula. And when the early-budgeting legislation arrived from the House in February, the Senate Finance Committee held one hearing on it, then took no action through the month of March.

Over that same period of time, though, lawmakers failed to make progress on a plan to fix the deficit. And early last week, with the end of the session approaching, the Senate majority made a new proposal: linking the early schools budget to Senate Bill 26, the chamber's proposal to spend Permanent Fund earnings to help fill the state's deficit.

Lawmakers say the fund, if managed like an endowment, can sustainably generate $2.7 billion each year. That's enough, when a portion is diverted to dividend payments, to cover a majority of Alaska's deficit.

But House majority members are skeptical about filling the deficit solely with new revenue from the Permanent Fund, as the Senate wants to do. That's because spending the fund's earnings on government services leaves less cash for Alaskans' dividend checks.

Since each Alaskan's dividend is reduced by an equal amount, those cuts fall disproportionately hard on low-income residents, according to House majority members. They say a more balanced plan would include a new statewide income tax — which would take more from wealthy residents — as well as higher taxes on oil companies.

But the Senate majority has rejected those proposals, leaving House members resistant to legislation to restructure the Permanent Fund.

Senate leaders say the state's nearly-empty savings accounts make that legislation necessary this year, which is why they're now offering House members concessions on education.

Last week's proposal from the Senate Finance Committee offered flat funding for schools next year, with no strings attached. It also promised to spend at the same level the following year — though only if the House agrees to the Senate plan to balance the budget with structured withdrawals from the Permanent Fund.

Then, at Friday's hearing, the Senate Finance Committee unveiled its new offer to the House: Schools would get a one-time, $30 million budget boost two years from now if the Permanent Fund plan is approved.

"We're trying to incentivize the structured draw," Eagle River Republican Sen. Anna MacKinnon, one of the finance committee's co-chairs, said in an interview. "We don't have a choice at this point."

House majority members said after the hearing that they're pleased the Senate is willing to debate schools spending.

"Everybody throws their opening volleys," said Gara. "And then you talk."

But interviews with legislators suggested that the House and Senate majorities still have some negotiating to do before a deal is done.

House majority members pointed out that while the Senate's proposal includes a possible schools spending boost two years from now, it lacks one for the coming year.

And, they said, they prefer a permanent increase in the per-student formula to the one-time bump proposed by the Senate. The one-time boost would disappear in future years unless lawmakers act to stop that from happening.

MacKinnon said she thinks there isn't support in the Senate for a permanent increase to the spending formula. The one-time boost, she added, "doesn't embed it in the foundation, so it keeps open the conversation for the next legislative body."

Wegner, the Sitka superintendent, pointed out that the state has plenty of cash to spend on schools if lawmakers can agree to do so.

Earlier in the state budget process, the House and Senate both agreed to boost this year's Permanent Fund dividend to $1,600, up from the $1,200 that was in the governor's preliminary spending plan.

That decision will cost the state an extra $200 million — or enough to boost the per-student spending formula by $800. That's eight times what House majority members are seeking for schools this year.

"The money's there," Wegner said.