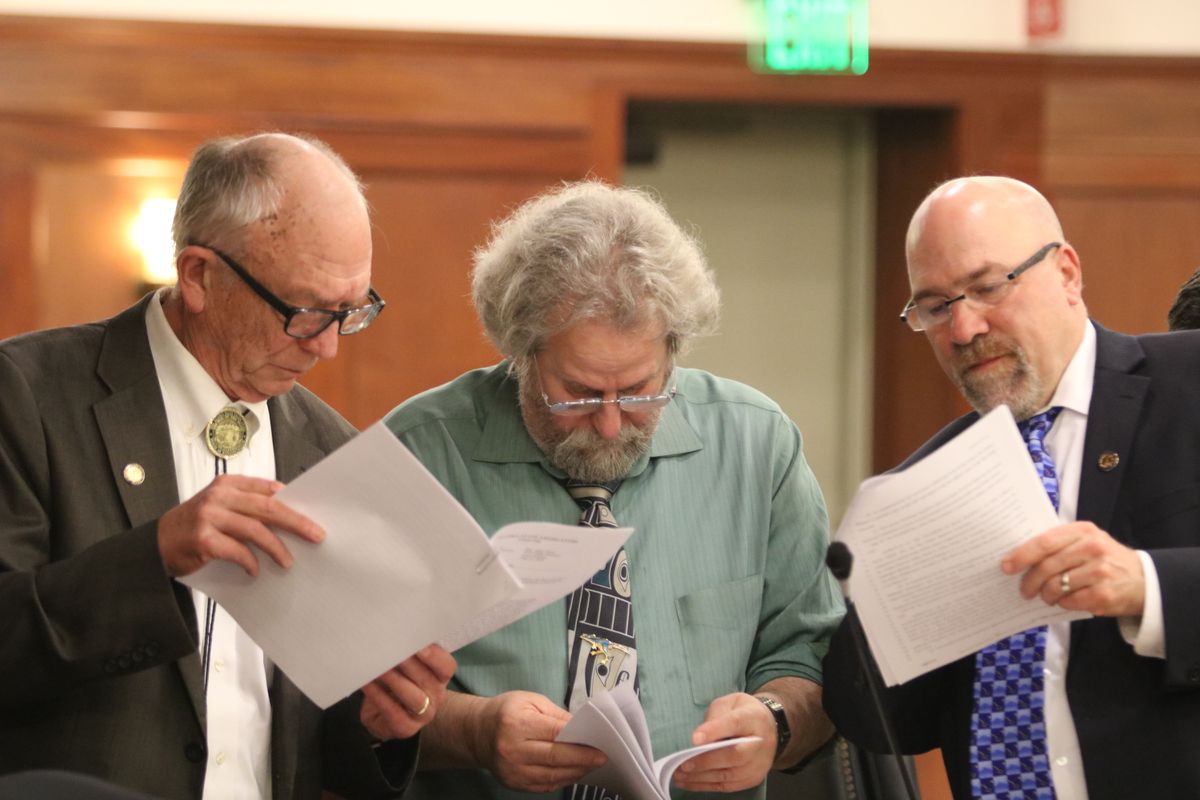 Update, 2 a.m. Sunday:  The Alaska Legislature passed a fully funded state operating budget Saturday, then struck a deal on the capital budget and adjourned for the summer, in an unusually subdued finish that largely spared constituents the acrimony and gridlock of the past three years.

The end to the session early Sunday was greased by the capital budget proposal, to which the House, controlled by a largely-Democratic majority, added items worth tens of millions of dollars in a Saturday evening hearing of its finance committee.

Among the additions was a one-time, $20 million boost for Alaska's public schools, or slightly less than two percent. There was also $20 million for the state ferry system, $6 million for a preschool program and a last-minute amendment on the House floor with $2 million for a transportation project in the Mat-Su — the reconstruction of part of Knik-Goose Bay Road.

Those additions, most of which were favored by House majority members, were balanced by a key omission: The capital budget included $20 million less than Gov. Bill Walker's administration says it needs to sustain the Medicaid program for the poor and disabled through June 30, the end of the state's fiscal year.

Members of the Senate's mostly-Republican majority had opposed budgeting the full amount requested by Walker's administration, saying the Medicaid program has grown at an unsustainable rate.

Original story: JUNEAU — The Alaska Legislature passed a fully funded state operating budget Saturday and appeared to be moving toward the end of its annual session, possibly before the end of the night.

Whether lawmakers close it out Saturday or some time after, Coghill added, depends on whether the House and Senate can agree on a revised capital budget proposal, which the House Finance Committee was still tinkering with at 8 p.m.

House Speaker Bryce Edgmon, in an evening interview outside his second-floor office, said he was confident that would happen, even if lawmakers have to stay at the Capitol late into the night.

[Related: Do you smoke? Work for an oil company? Care about crime? Alaska lawmakers just passed bills that could affect you]

"We still have a lot of work in front of us. But the pieces are clearly falling into place," he said. "I think the expectation is now not if, but when we're going to adjourn tonight."

Edgmon said lawmakers were pushing to finish Saturday in part because certain members of the House and Senate had plans to travel out of town soon after.

The Legislature has already worked nearly four weeks past a 90-day cap on its session set by a 2006 citizens initiative. A separate provision in the Alaska Constitution, however, allows them to work for 121 days — a deadline that doesn't arrive until Wednesday.

Lawmakers' disagreements over how to fill the state's huge deficit kept them working into June, or longer, in each of the previous three years. But this year, part of their endgame was predetermined by the fact that they'd spent almost all the money in their main savings account, the Constitutional Budget Reserve.

[Related: Without action by lawmakers, Alaska's main savings account will soon be empty. What will they do?]

The Legislature this year decided instead, for the first time ever, to fill most of the state's deficit with investment earnings from the $65 billion Permanent Fund — while still leaving enough to pay a $1,600 dividend to each Alaskan.

The decision to use the fund's earnings to fill the state's deficit is expected to reduce the gap to some $700 million from more than $2 billion. The Legislature's formal vote to do so Saturday drew praise from Gov. Bill Walker, an independent, who's been pushing lawmakers to take that step since 2016.

"It's still a deficit, but my goodness, it's really changed a long way," he said in a Saturday evening interview in his third-floor Capitol office, where he and a group of aides were watching a live stream of the House and Senate proceedings unfolding a floor below.

Walker added: "I'm very pleased with what they did. It's been a banner year, as far as I'm concerned."

That view was not unanimously held, however.

Hours after the Legislature passed the operating budget, Walker's leading Republican challenger in the November election, Mike Dunleavy, sent a fundraising email accusing lawmakers of having "stolen" money from Alaskans' dividends by diverting Permanent Fund earnings to the deficit.

"Emergency alert: $1,100 stolen from you," the email said. "As governor, you can trust Mike to put an end to this madness."

Lawmakers' end-of-session negotiations this year hinged primarily on the details of how, exactly, the Permanent Fund should be used to fill the budget on a yearly basis — and on the details of the state operating and capital budgets.

The largely-Democratic House majority and mostly-Republican Senate majority had different ideas for how the fund should be managed, and which government programs and projects to prioritize.

A tentative operating budget deal between the two chambers was announced by legislative leaders Thursday, a first indication that lawmakers could finish by the weekend. Each chamber formally approved the plan in separate votes Saturday afternoon.

The Legislature also passed an array of bills Saturday that are important to individual legislators. Among them:

• A proposal by Fairbanks Republican Sen. Click Bishop to create a raffle, funded by Alaskans who choose to contribute part of their Permanent Fund dividends, to help pay for state education programs.

• A bill from Anchorage Democratic Rep. Chris Tuck to allow businesses to give veterans a preference in hiring decisions.

• Legislation from Sitka Democratic Rep. Jonathan Kreiss-Tomkins to create a "North Star Medal," which the governor could award to police, firefighters, first responders or others who die or are seriously injured in the line of duty while showing "exceptional bravery or heroism."

That left the capital budget. A preliminary version of that bill passed the Senate on Tuesday; the House Finance Committee released a rewritten version Wednesday.

The finance committee then rewrote the legislation again, releasing its latest draft just before 8 p.m. Saturday.

It included several major changes, including a one-time, $20 million spending increase for Alaska's public schools, which equates to slightly less than 2 percent.

It also added money for other House priorities like the state ferry system, the renovation of Anchorage's port and the Medicaid health care program for the poor and disabled.

The legislation was expected to move to the House floor for a final vote later Saturday.

Members of Senate leadership, who have generally favored lower spending levels than the House majority, couldn't immediately be reached to comment on the House's latest capital budget proposal.

Coghill, the Republican senator from North Pole, said his majority caucus's approval of the capital budget would likely depend on how much the House increases it.