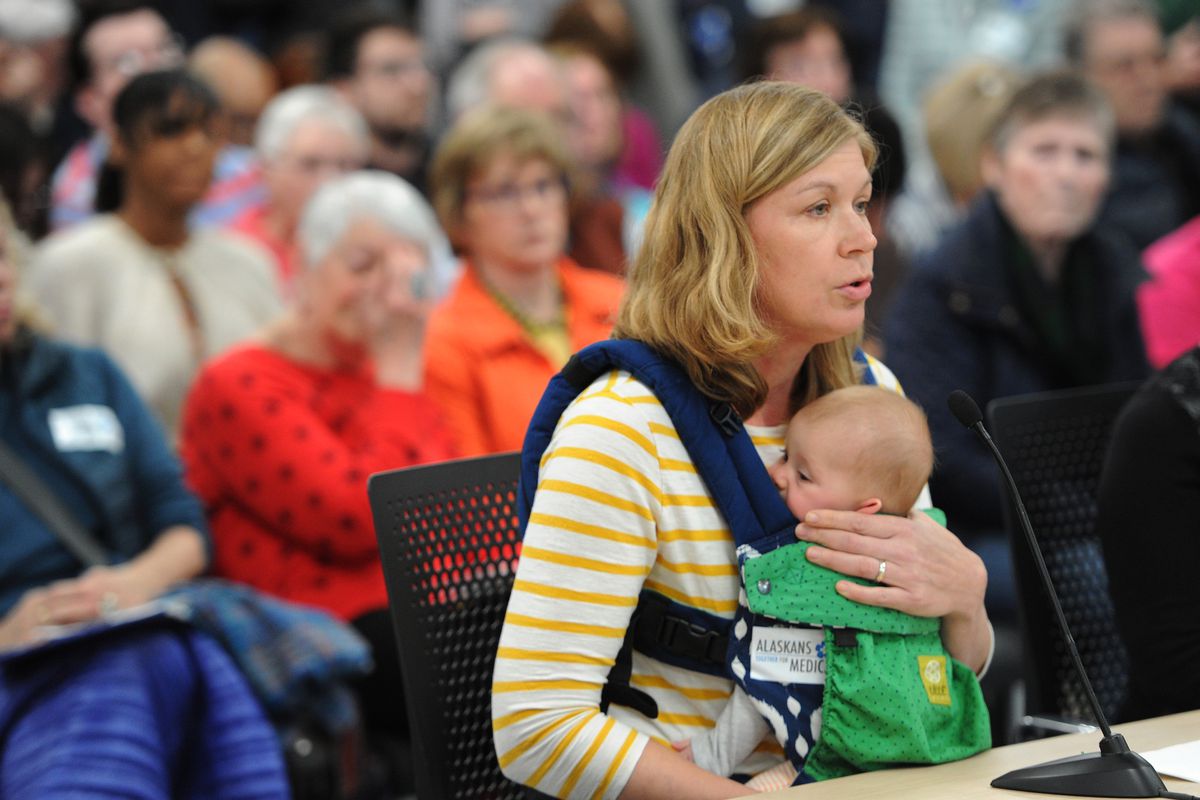 Hundreds of people packed the Anchorage legislative office Sunday to tell lawmakers their feelings about the unprecedented cuts to Alaska’s budget proposed by Gov. Mike Dunleavy.

More than 130 people had testified at the three hour hearing by 5:30 p.m. Sunday. They ranged from a retired teacher to a bank executive to a 50-year-old construction worker struggling to complete a degree at UAA. Lawmakers had extended the hearing past its end time of 5 p.m. because so many people wanted to be heard.

The overwhelming majority of people who spoke beseeched lawmakers not to okay the drastic cuts prescribed by the proposed Dunleavy budget. Many asked lawmakers to look for new revenue sources, such as a state income tax.

“Please tax us,” said Sara Dykstra, a leader of a grassroots group called Growing Alaskan Leaders, who testified with her baby in a carrier on her chest.

The hearing in Anchorage was one of eight such public events the House Finance Committee is holding around the state to get feedback on the governor’s proposed budget. Hearings were also held starting Friday in Juneau, Ketchikan, Wasilla, Bethel, Fairbanks, Sitka and Soldotna.

“Given the historic nature of the decisions before policymakers and the fact that our savings accounts have been spent down, the committee is going above and beyond to listen directly to Alaskans,” the House Finance Committee said in a statement. “The hearings are the first of their kind in Alaska history.”

It was immediately clear that Anchorage residents had a lot to say about the budget. Before the hearing began, the line to get inside stretched far into the parking lot. At one point the line just to get into the rooms was 45 minutes long, according to attendees who waited outside.

“You can’t cut the university by $134 million in a single year and expect it to survive,” said Dr. Kristine Mann, a professor emeritus in the biology department at the University of Alaska Anchorage.

She cited what she called already dire conditions in Anchorage schools -- saying classrooms are already so crowded that some have students sitting on window sills -- and said the proposed cuts would further hurt kids.

“This is literally the dismantling of public education,” Marsett said.

Some people testified that they believe the cuts would lead to such severe job losses that Alaska might be plunged into another recession, or worse.

Joe Schierhorn, the CEO of Northrim Bank, thanked Dunleavy for offering a balanced budget. But he said he was concerned “by the magnitude of cuts to education, health and human services and transportation.”

“The uncertainty injected into our economy through these proposals has a chilling effect on investment in our state,” he said.

People offered ideas on what to do, including a potential state income tax, a sales tax or a restructuring of the PFD to allow for a lower dividend.

Orin Seybert, the founder of PenAir regional air carrier, called himself a “Jay Hammond Republican,” and said the state needed to look at the way thousands of non-residents come to work in Alaska oil and fisheries industries “use our services, take their money and go back home.”

A handful of people testified in support of the Dunleavy budget, saying they thought the big cuts were necessary to the fiscal future of the state.

Bert Houghtaling of Big Lake testified to his support of the Dunleavy budget, saying he believes the state already had wasted too much money.

He pointed to what he said was a ferry system with as little as three passengers on some trips in the wintertime and $500,000 proposed study on Vitamin D as examples.

“It’s time to cut the waste out there,” he said.

Judy Eledge testified that she was in support of the Dunleavy budget, and believed a lot of other people were as well who didn’t attend the hearing that day -- otherwise Dunleavy wouldn’t be the governor.

“I do believe the majority of Alaskans were very clear during the 2018 election,” she said.

The push back to the cuts mostly came from special interest groups who benefit from state money, she said.

“Cut the subsidies ...that only a certain group of Alaskans receive and fairly distribute dividends to everyone in the state.”

Other hearings have also attracted crowds: In Juneau on Friday, 68 people testified at Friday’s hearing, with many saying they’d accept a lessened PFD or an income tax to avoid deep cuts to services, according to the Juneau Empire.