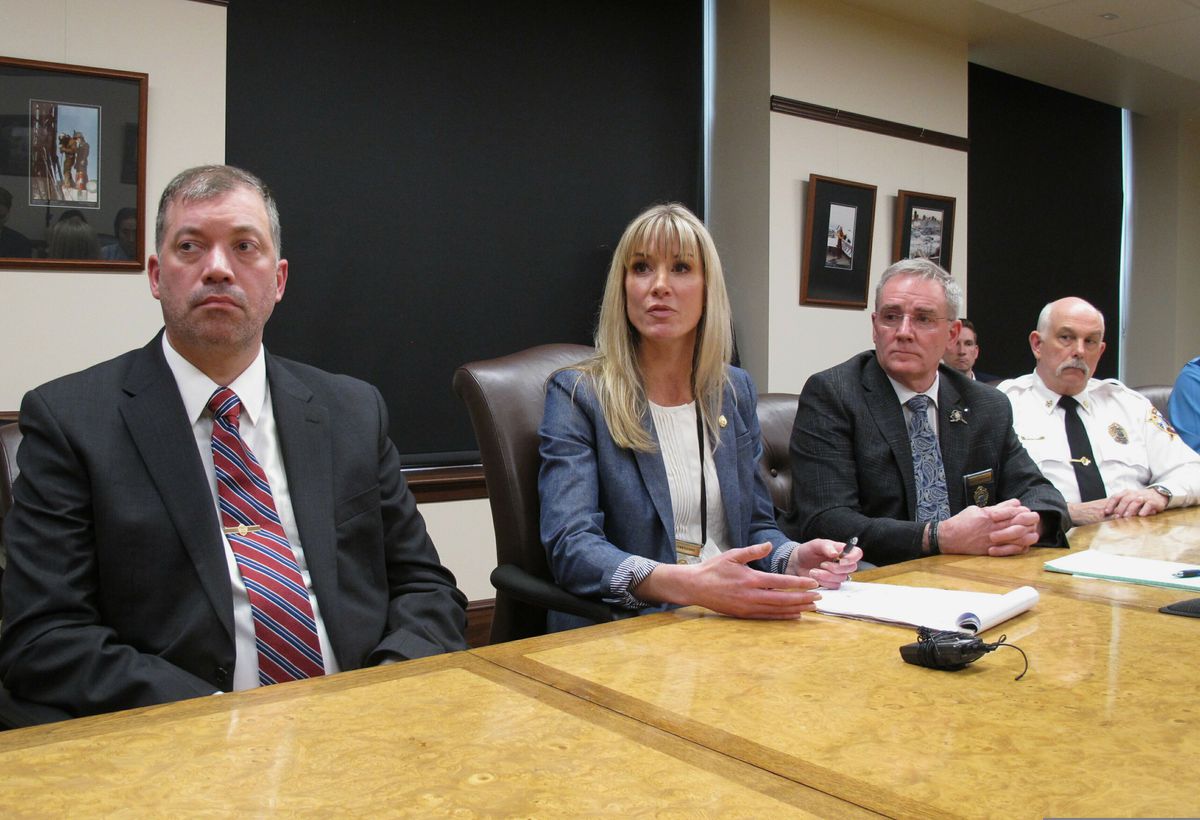 JUNEAU — Gov. Mike Dunleavy’s administration was making an all-out push Tuesday in its effort to win confirmation of his pick to lead the Department of Public Safety, who has been accused of chronic absenteeism in a prior position.

Amanda Price faces a confirmation vote Wednesday. She held a news conference Tuesday with members of her leadership team and a public safety employees' union official who praised her drive and approach to the job before she testified at a final confirmation hearing.

A Cabinet-level post has not been voted down by the Legislature since 2009, when lawmakers rejected then-Gov. Sarah Palin's choice of Wayne Anthony Ross for attorney general.

Price was a policy adviser to former Gov. Bill Walker and has said she was surprised by testimony from a former Walker chief of staff, Scott Kendall.

Kendall last week told the House State Affairs Committee that Price was chronically absent, which he said he witnessed, and said it had become almost a joke among staff. He also said allegations of plagiarism by Price were relayed to him.

Jim Whitaker, who preceded Kendall as chief of staff, and Marcia Davis, a former Walker deputy chief of staff, have defended Price. In a letter to the committee, they said during their time Price was not "disciplined or counseled for absenteeism, or plagiarism as none of these acts occurred."

The letter misspells Whitaker's name. Whitaker said Davis wrote the first draft, and he didn't catch the spelling error. "My concern was content correctness," he told The Associated Press by email.

Price has denied any plagiarism and said "there was no concern ever articulated to me about work performance."

She told reporters Tuesday the allegations had become a distraction from the department's work, and Matt Shuckerow, a Dunleavy spokesman, said the news conference was an effort to "dispel some of those things that have been put out there."

The administration has been running social media ads in support of Price, Shuckerow said, adding that less than $100 had been spent so far. Similar ads for other nominees were not being run, Shuckerow said.

Price isn't the first Dunleavy nominee to attract attention. Dunleavy's first pick to lead the Department of Administration resigned after being accused of lying about his business background and a Board of Regents nominee withdrew amid scrutiny over social media posts.

Rep. Laddie Shaw, an Anchorage Republican and a former director of the Alaska Police Standards Council, in an interview said he is approaching his review of Price the same as he would vet an Alaska State Trooper.

"I don't think she should live under any less of a standard," he said.

Price has not worked in law enforcement but her resume states she worked as an advocate for victims of sexual violence before joining Walker's administration, where it says she worked for two years. She later worked for a period on Dunleavy's campaign.

She said in Tuesday's hearing she worked odd jobs before working for nonprofits and once owned a baby boutique.

She said she did not get a college degree. She said she discontinued her schooling because she didn't have the money to continue and took a job instead.

She said she would not provide some documents requested through the committee by another member, including her attendance record while working for Walker, academic transcripts and a credit report. Price said those could contain sensitive and personal information and providing to the committee would make them public.

Kendall has said he gave Price the choice between resigning or being fired but said he didn't get into a substantive discussion with her on why because he thought it would be painful for her to hear and didn't think it would be productive.

Price previously told the committee she didn't leave the Walker administration of her own volition, saying she answered that way "because it was clear that it wasn't working." She said she and Walker weren't in lockstep on public safety policy, which caused a rub.

She said Tuesday she could have been clearer in discussing her departure. She said when she shared concerns with an effort to overhaul the criminal justice system, "I saw a shift in the way in which my work was received, approved and accepted within that administration. And given that no other input or feedback had ever been shared with me by any member of the administration, I made the assumption that that was where the break and the breach occurred."

Kendall has said he didn't know what Price's positions on policy were. The letter from Whitaker and Davis said Price spoke with Whitaker about concerns over law enforcement objections to the overhaul effort.

Earlier this year, Senate President Cathy Giessel said she traveled to Kotzebue with Price before session started and saw Price interact with law enforcement officers who were "very enthusiastic about her."

Giessel said Friday the recent confirmation hearings have caused her to take another look at the information on Price.