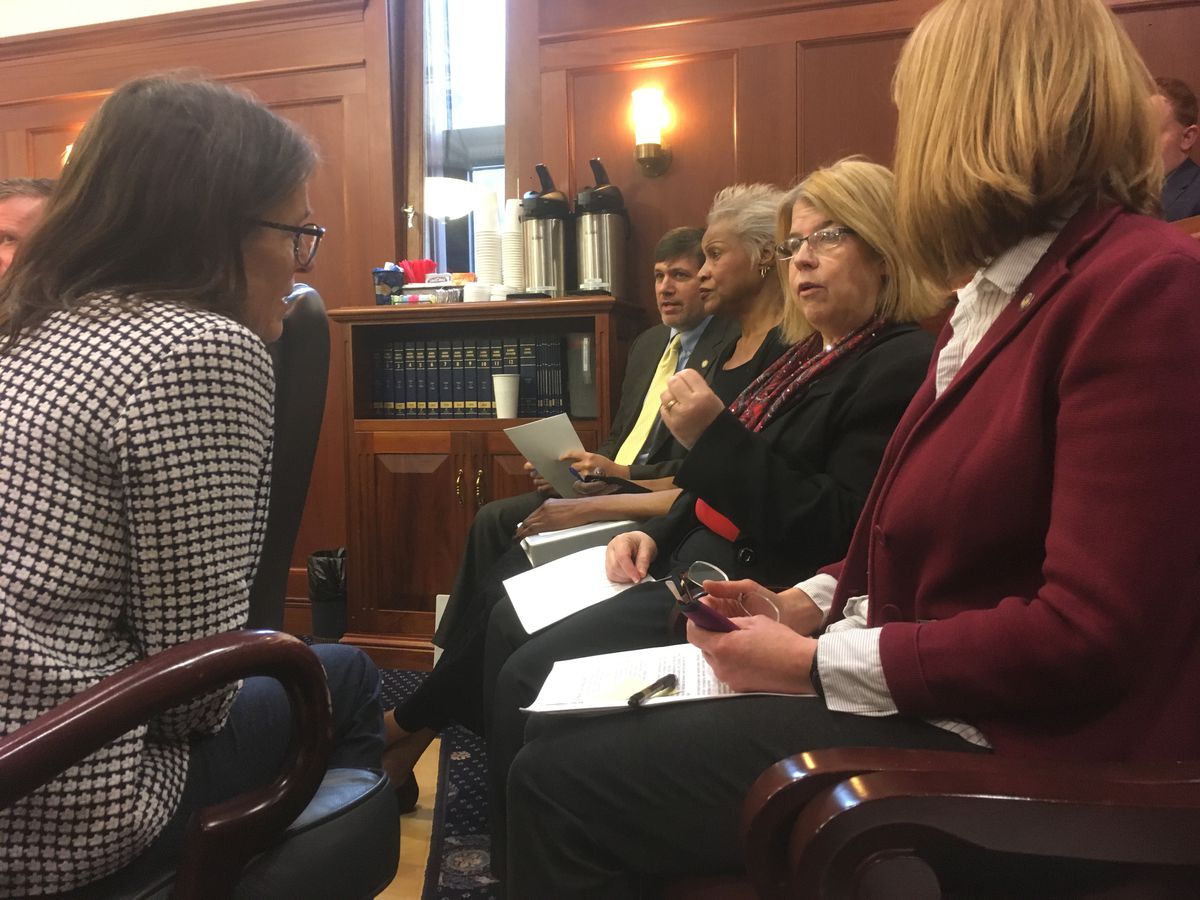 JUNEAU — A joint session of the Alaska Legislature voted Wednesday to confirm every member of Gov. Mike Dunleavy’s cabinet without exception.

Since statehood, lawmakers have rejected a cabinet confirmation only once, and they failed to add another exception to that tradition — though not without moments of doubt.

Price’s nomination has been in question since Scott Kendall, chief of staff to former Gov. Bill Walker, testified that she was asked to resign as a senior policy adviser to Walker and did not leave on her own volition, as she had previously told lawmakers. Price had allies of her own, including Jim Whitaker, who served as Walker’s chief of staff before Kendall and said he found her to be a capable worker.

Price was also accused of plagiarism and of exaggerating her educational background, which led Sen. Peter Micciche, R-Soldotna, on Wednesday to label the accusations a “witch hunt,” adding, “we had people walking around that had files of negative information about Amanda Price.”

The Dunleavy administration ran ads on social media to support Price’s confirmation (spending less than $100 in the process, press secretary Matt Shuckerow told reporters) and flew Price’s subordinates in the department from Anchorage to Juneau for a Tuesday press conference to support her confirmation.

She has a “consistent record of deception toward the Legislature this year,” Fields said, adding that “unblemished integrity should be a prerequisite” for the job.

The first sign that Price would be appointed came when Rep. Laddie Shaw, R-Anchorage, stood up to speak in her favor. Shaw, who has 17 years of experience in the Department of Public Safety and was a member of the committee vetting her confirmation, said he was unimpressed with Price’s answers to questions in committee, but he values leadership as a quality in a commissioner, and when he asked department employees, they said they want her as commissioner.

“If they stand behind her, madam president, then I do, too,” Shaw said.

After Shaw, other House Republicans gave their support.

“I support her because the public safety officers do,” said Rep. Tammie Wilson, R-North Pole.

The Senate voted first, and the total in that body was 10-10, leaving the House to decide the issue. The House split nearly along party lines, with 15 Democrats and independents opposed to Price and 23 Republicans, plus Rep. Andi Story, D-Juneau, in favor.

Opposition to Crum was led on the floor Wednesday by Rep. Ivy Spohnholz, D-Anchorage, who cited a lack of experience and accused Crum of mishandling a contract for a private firm to manage the Alaska Psychiatric Institute.

“Crum and his team have rushed through this contract essentially in the dark of night,” she said.

She also faulted Crum for contributing to an expected cutoff of senior benefits payments to elderly Alaskans, saying he could have used his authority as commissioner to transfer money between accounts to avoid the problem.

The governor’s first choice to lead the Department of Administration withdrew from consideration after legislators learned he had lied on his resume and in testimony. The governor’s second choice, Kelly Tshibaka, was confirmed 48-11.

Attorney General Kevin Clarkson was the only other cabinet official to receive more than two “no” votes. He was confirmed 40-19.

The Legislature declined to vote on the nomination of Karl Johnstone for the state Board of Fisheries after Spohnholz said she had received messages from two women who accused Johnstone of making “inappropriate and unwelcome sexual comments” during his previous term on the board.

Lawmakers said they wanted to give Johnstone a chance to respond to those allegations, which were not mentioned during confirmation hearings.

In a separate vote, lawmakers failed by a single vote to appoint Vivian Stiver of Fairbanks to the Marijuana Control Board. Stiver’s appointment was opposed by members of the marijuana industry, who said it was inappropriate to have someone on the board who had supported a marijuana-ban campaign in Fairbanks.