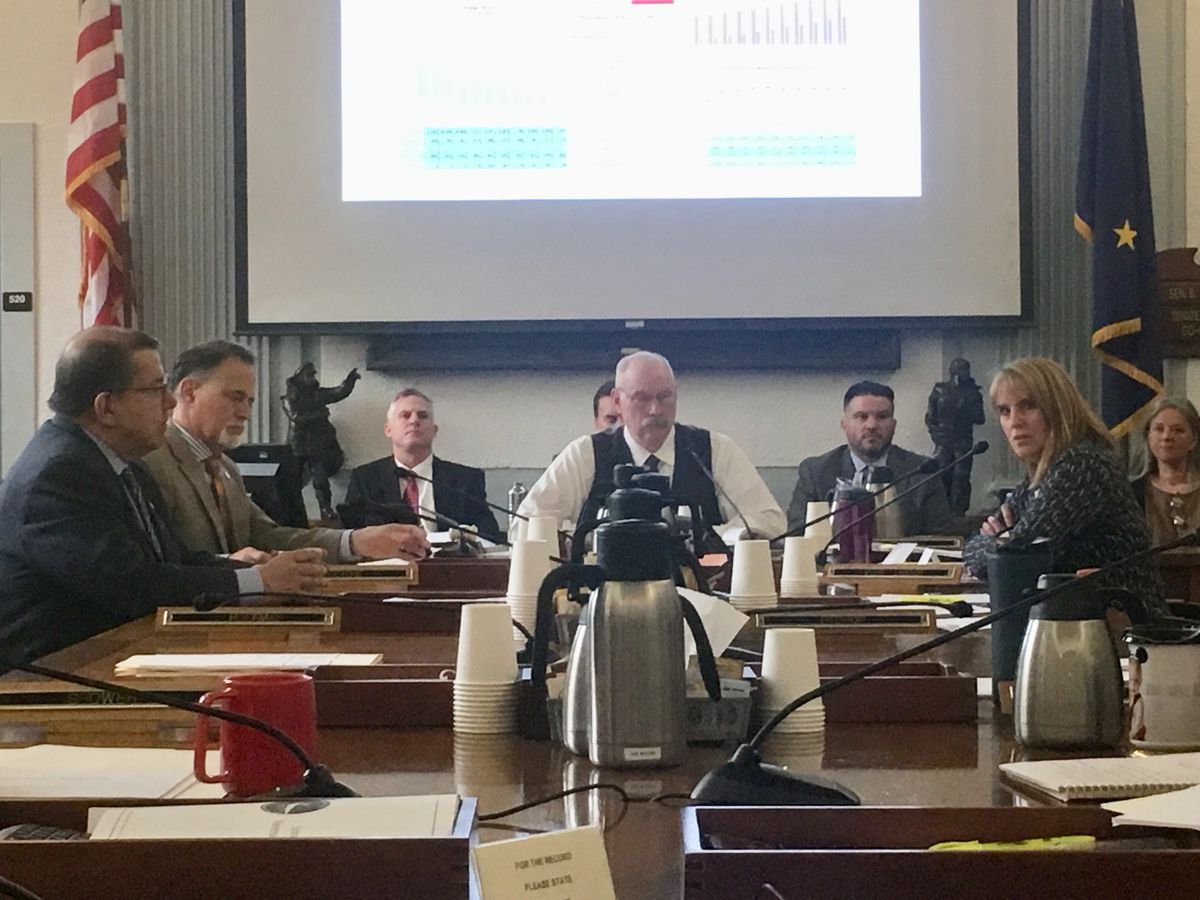 JUNEAU — Seeking to maximize the amount of this year’s Permanent Fund dividend but reluctant to make deep cuts in state spending, some Alaska legislators have begun asking whether they should tap state savings accounts.

That question is part of a larger policy question debated Thursday in a hearing of the Alaska Senate Finance Committee: Is the Permanent Fund dividend an obligation that should be paid in full, or is it effectively another state agency subject to funding increases or decreases from year to year?

If lawmakers believe it’s an obligation under state law, they need to come up with the money to pay for it. If they believe differently, they risk the ire of voters who are watching intently.

“I think this last gubernatorial election pointed out that the biggest point in front of people’s minds is the dividend and what level we should address it,” said Sen. Lyman Hoffman, D-Bethel.

Lawmakers are deeply divided on the dividend question — not always along party or caucus lines — and the issue will receive top billing in the next three weeks as legislators finalize Alaska’s state budget.

According to figures presented Thursday by David Teal, director of the nonpartisan Legislative Finance Division, the draft budget under consideration by the Senate Finance Committee has enough money for a dividend of $1,171 per person. That figure will change, because the Senate has not yet finalized its budget.

The budget approved by the House of Representatives earlier this month has enough money for a dividend of $1,284, said Rep. Neal Foster, D-Nome, in an April 12 news conference.

The House and Senate have each moved away from the budget proposal introduced by Gov. Mike Dunleavy in February. That budget called for $1.6 billion in spending cuts and local tax increases in order to pay a dividend of about $3,000. That’s the “full” amount under existing state law, but lawmakers haven’t followed that law since 2016. Dunleavy campaigned for office on a promise to follow that law (barring voter approval of another approach), and he has remained resolute.

According to Teal’s figures, the Senate or the House would have to come up with another $1.2 billion to pay a full dividend.

“The point is: If you want to pay a higher dividend than (the Senate or House), you need additional cuts, or additional revenue or draws from reserves,” he said.

So far, lawmakers have rejected the budget cuts that are the governor’s preferred option. They have also rejected a proposal by Sen. Bill Wielechowski, D-Anchorage, to revoke a billion-dollar oil tax deduction, thus raising taxes. No other tax increases have gained traction. With those options eliminated, that leaves spending from savings as the only option if lawmakers want to increase the dividend, and plenty do.

Wielechowski; Sen. Mike Shower, R-Wasilla; and Sen. David Wilson, R-Wasilla, all serve on the finance committee and have stated their support for a full dividend.

In the House, Rep. Gabrielle LeDoux, R-Anchorage, said earlier this month that she would seek a full dividend in the final budget. On Thursday, members of the Republican House minority, including the minority leader and the minority’s ranking member on the finance committee, said they want to see an increased dividend even if it means spending from savings.

“For me personally, I would like to see the dividend funded at the traditional formula,” said Rep. Cathy Tilton, R-Wasilla.

Sen. Lyman Hoffman, D-Bethel, has suggested a $1,600 dividend as part of a transition away from the traditional formula, but even that is above the amount of money available in the Legislature’s proposed budgets.

When the new fiscal year begins July 1, the state will have about $2.3 billion in the Constitutional Budget Reserve, according to figures provided by Teal. The Alaska Permanent Fund’s earnings reserve — an account that can be spent without a statewide vote — is expected to have $19 billion.

When it comes to the earnings reserve, lawmakers last year passed legislation with a non-binding limit on spending from that account. If spending is below that limit, the fund is expected to keep growing. If lawmakers violate that limit, they increase the risk that the Permanent Fund will diminish.

“If we had a $3,000 dividend — if we kept the statutory dividend for the next couple years — even next year is going to become tough, and it’s going to be unbearable, and we’re going to be eroding our Permanent Fund and the value of that fund for future generations,” said Sen. Bert Stedman, R-Sitka.

Even with those drawbacks, senators Thursday acknowledged public demand for a larger dividend.

“I think what’s painfully obvious is how easy this would be if it were just a math problem. It’s not. The math is easy. The problem is the 735,000 others,” said Sen. Peter Micciche, R-Soldotna, alluding to public testimony in favor of a bigger dividend.

“Sen. Micciche, when you say the public feels differently, which public? The public is all over the map. There’s different groups of the public that feel different things,” said Sen. Natasha von Imhof, R-Anchorage.

She said lawmakers need to make a decision to protect the long-term fiscal health of the state, and staying bound to a 30-year-old formula “is fiscal insanity, irrational and irresponsible."

The Senate Finance Committee will take up budget amendments — including the amount of the dividend — Friday morning. A vote on the resulting budget draft is scheduled next week.