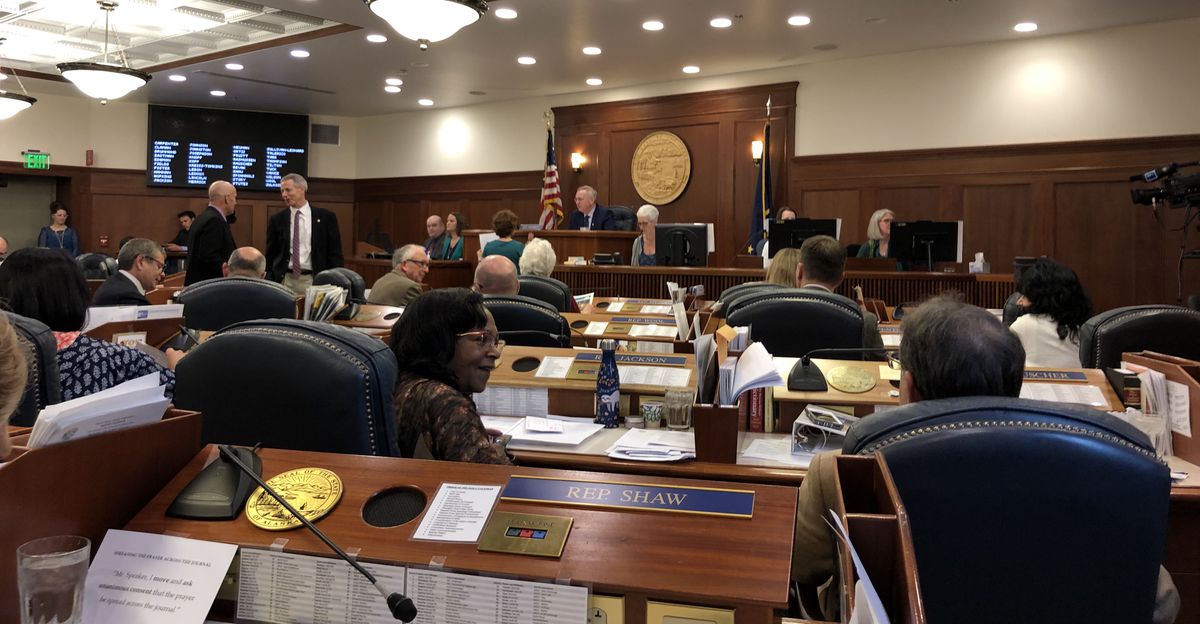 JUNEAU — The Alaska House of Representatives has voted to approve a tough new anti-crime law that boosts most prison sentences, including those for nonviolent drug offenses.

The bill is the largest step yet in the repeal and replacement of Senate Bill 91, the controversial 2016 criminal justice legislation that reformed the state’s parole and pretrial systems, generally lowering criminal punishments for nonviolent offenses.

SB 91′s reforms have often been blamed for contributing to a spike in property crimes, and lawmakers have repeatedly revised the legislation. This year’s revision, House Bill 49, reverts much of Alaska’s criminal law to what it was before SB 91.

“The public’s assignment to us this session was to repeal and replace. This bill does it,” said Rep. Gabrielle LeDoux, R-Anchorage.

Shortly after the House voted 36-2 in favor (two lawmakers were excused absent) of HB 49, Gov. Mike Dunleavy said he supported the House vote and hopes the Senate will do the same.

Public safety has been priority # 1 for my admin, I’m pleased the House has passed legislation to repeal the failed SB91 & replace it with common sense crime laws that will give police, judges, & prosecutors the tools they need to address the crime wave in Alaska. #akleg 1/2

Sen. Shelley Hughes, R-Palmer and chairwoman of the Senate Judiciary Committee, said over the weekend that the Senate plans to vote on the proposal after Memorial Day. A spokesman for the Senate majority confirmed that remains the plan.

What the House approved Monday night is a compromise version of HB 49 crafted after the House and Senate passed different versions of the legislation, which incorporates ideas introduced by Dunleavy in four separate bills at the start of the session.

It increases prison sentences for most felonies and misdemeanors, creates new crimes, removes the requirement for judges to follow a mathematical formula when considering whether to release accused Alaskans before trial, and it reduces the ability of violent criminals to earn parole.

“Hopefully with this bill, (Alaskans in my district) will begin to see some relief, and then we can begin to work on the next step,” said Rep. David Eastman, R-Wasilla.

Opposition came from two Democrats who said the bill will not reduce crime and is a revival of the state’s war on drugs.

“The war on drugs did not work before SB 91. It will not work after HB 49,” said Rep. Grier Hopkins, D-Fairbanks.

Despite those arguments, lawmakers from the state’s two most liberal House districts — HD 20 in Anchorage and HD 33 in Juneau — voted for the bill.

She said she was swayed by requests from police chiefs in her district to vote for the bill.

“This bill strengthens the ability of police and prosecutors to lock up vehicle thieves and vehicle theft rings. It strengthens penalties for drug dealers, and it has important reforms such as stronger re-entry programs and quicker testing of sexual assault examination kits,” said Rep. Zack Fields, D-Anchorage.

The sexual assault exam kit testing components of the bill were originally in legislation sponsored by Rep. Geran Tarr, D-Anchorage.

“I think this is a good compromise,” said House Minority Leader Lance Pruitt, R-Anchorage, saying that he was disappointed that the state’s pretrial system still contains some elements from SB 91.

The price of HB 49 is expected to be $39 million in the first year and $54 million in the second year, rising afterward, according to the latest available estimates from the Dunleavy administration. That estimate includes the cost of reopening a prison in Palmer that was closed after the passage of SB 91.

The estimates do not include the construction or operating cost of a new state prison, something that would be required under the state’s prison population forecast. The state could eliminate the need for a new prison by shipping prisoners out of state, but lawmakers have traditionally eschewed that option because studies indicate it results in more prisoners returning to crime after their release. A proposal by the Dunleavy administration to move prisoners Outside was rejected by lawmakers this year.

“We’re going to spend over $50 million. We’re going to open up Palmer. It still won’t be enough, so we’re going to be opening up another prison or sending people out of state,” said Rep. Tammie Wilson, R-North Pole.

Wilson added that she expects lawmakers’ next step will be to create new programs for drug treatment and alternatives to prison for nonviolent addicts.

“The path to success does not have a final arrival point, and we’ll have to keep at it from here,” said Rep. Chuck Kopp, R-Anchorage.