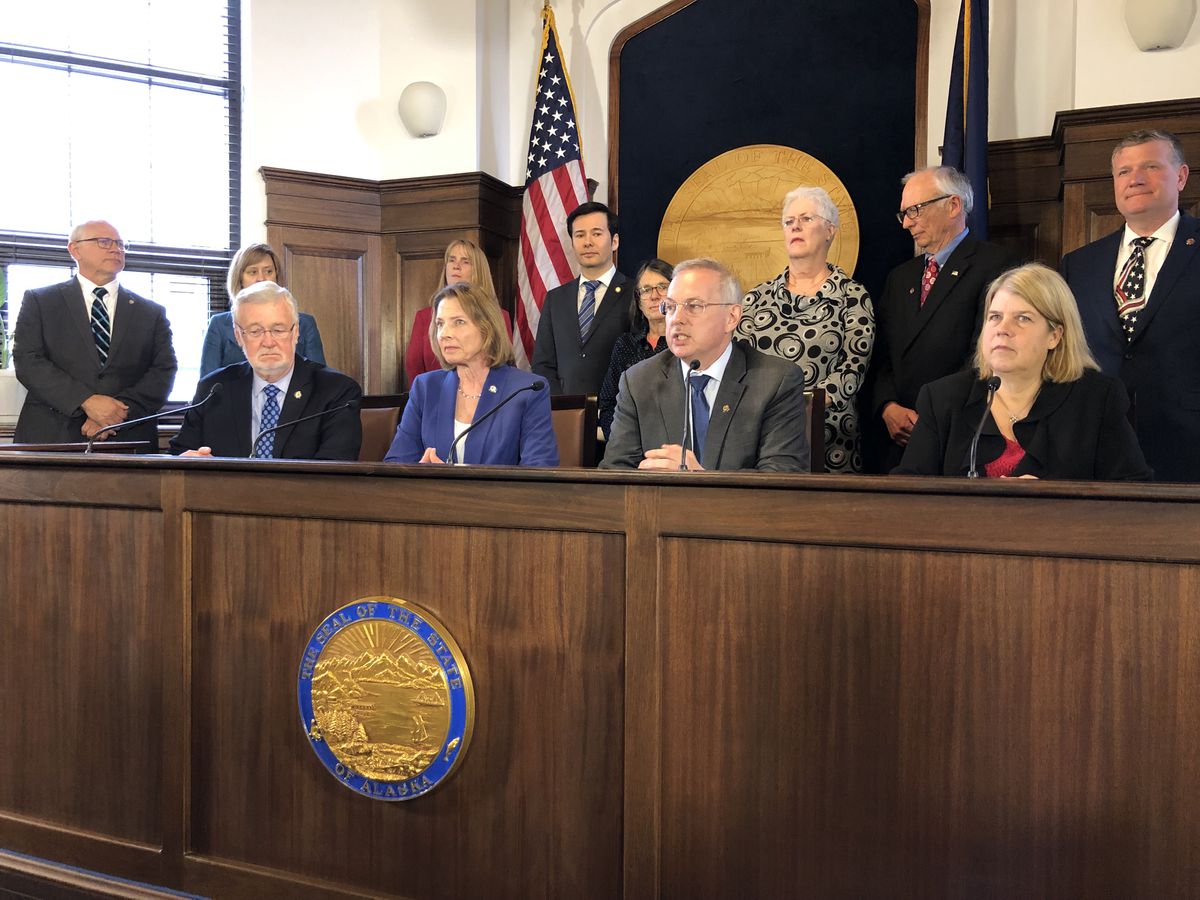 Members of the Alaska House Majority and Alaska Senate Majority hold a joint press conference Tuesday, May 28, 2019, to discuss the possibility of a lawsuit by the Alaska Legislature against Gov. Mike Dunleavy. (James Brooks / ADN)

Members of the Alaska House Majority and Alaska Senate Majority hold a joint press conference Tuesday, May 28, 2019, to discuss the possibility of a lawsuit by the Alaska Legislature against Gov. Mike Dunleavy. (James Brooks / ADN)

JUNEAU — The Alaska Legislature voted Tuesday to prepare for a possible lawsuit against Gov. Mike Dunleavy that will test the limits of legislative and executive power. The dispute could leave public schools mostly unfunded when the new fiscal year begins July 1.

With a 23-14 vote in the House and a 14-4 vote in the Senate, legislators voted to “delegate to the Legislative Council the full authority to initiate, intervene, appeal, and take all action necessary to direct litigation” related to state funding for Alaska’s K-12 schools.

Last year, lawmakers voted to fund the state’s public schools in the 2020-21 school year with no cuts and a $30 million bonus payment. The idea was to eliminate budget uncertainty for school districts by agreeing to funding in advance, but the governor disagrees with the Legislature’s approach.

The governor says that because his legal experts consider last year’s action unconstitutional, he cannot follow it. A majority of the Alaska Legislature has said that the vote is legal, and under the Alaska Constitution, the governor must follow it.

Members of the administration confirmed last week that unless the Legislature reverses its actions from last year, the governor will not release state money for public schools.

Tuesday’s vote is a response to that decision and prepares the Legislature for a lawsuit if the governor fails to disburse education funding when the fiscal year begins July 1. The filing of such a lawsuit must be approved by the 14-member Legislative Council beforehand.

“We acted, and we set aside funding for the future funding of education. That act was considered, it was done deliberately, and now we find ourselves in a position where we must defend that action,” said Sen. John Coghill, R-North Pole and chairman of the Senate Rules Committee.

“Hopefully we don’t have to go to a lawsuit. This just gives us the opportunity,” Coghill said.

According to a legal memo from Attorney General Kevin Clarkson, the governor’s opposition to the Legislature’s action last year is based on four points: state law requires an annual budget process, the state constitution bans dedicated funds, the governor’s ability to veto has been bypassed, and the forward funding doesn’t follow the executive budget act.

“Our attorney general, our Department of Law, our lawyers, have indicated to us over and over and over again that this would appear to be unconstitutional,” the governor said in a Tuesday press conference.

Because of those four points, the governor said that unless the Legislature reverses last year’s plan, it’s as if lawmakers had not funded education at all.

In an opinion column submitted to the Daily News, Clarkson asked whether the Legislature’s interpretation of the constitution could allow things to be funded multiple years in advance.

While most members of the Legislature supported the decision to challenge the governor’s interpretation, members of the Republican House minority were particularly vocal in opposition.

Other members of the minority warned that a lawsuit could tie up education funding for months. They were rebutted by the House’s independent Republican, Rep. Gabrielle LeDoux, who is a member of neither majority nor minority.

“When something is time-critical, the court really can step up to the plate quickly,” she said, adding a reference to the man sitting behind her — Rep. Bart LeBon, R-Fairbanks, whose November election was decided in a court-challenged recount.

Dunleavy press secretary Matt Shuckerow said Tuesday afternoon that it is also possible for a court to issue an injunction allowing continued funding amid a lawsuit.

The governor suggested he would be amenable to a “friendly lawsuit” settling the issue, but doing so would require the Legislature to follow his lead on education funding, and majority lawmakers Tuesday afternoon expressed no interest in doing so.

While a settlement between the governor and Legislature is still possible in the weeks remaining before July 1, legislators believe a lawsuit is worth the cost and effort if it comes to that.

“The matter at hand, I believe, is the separation of powers, a very important principle in our constitution,” said Sen. Gary Stevens, R-Kodiak and chairman of the Legislative Council. “It is the legislature’s ability to pass budgets … and it is the administration’s responsibility to execute those laws.

“I believe we are on firm ground here,” Stevens said.