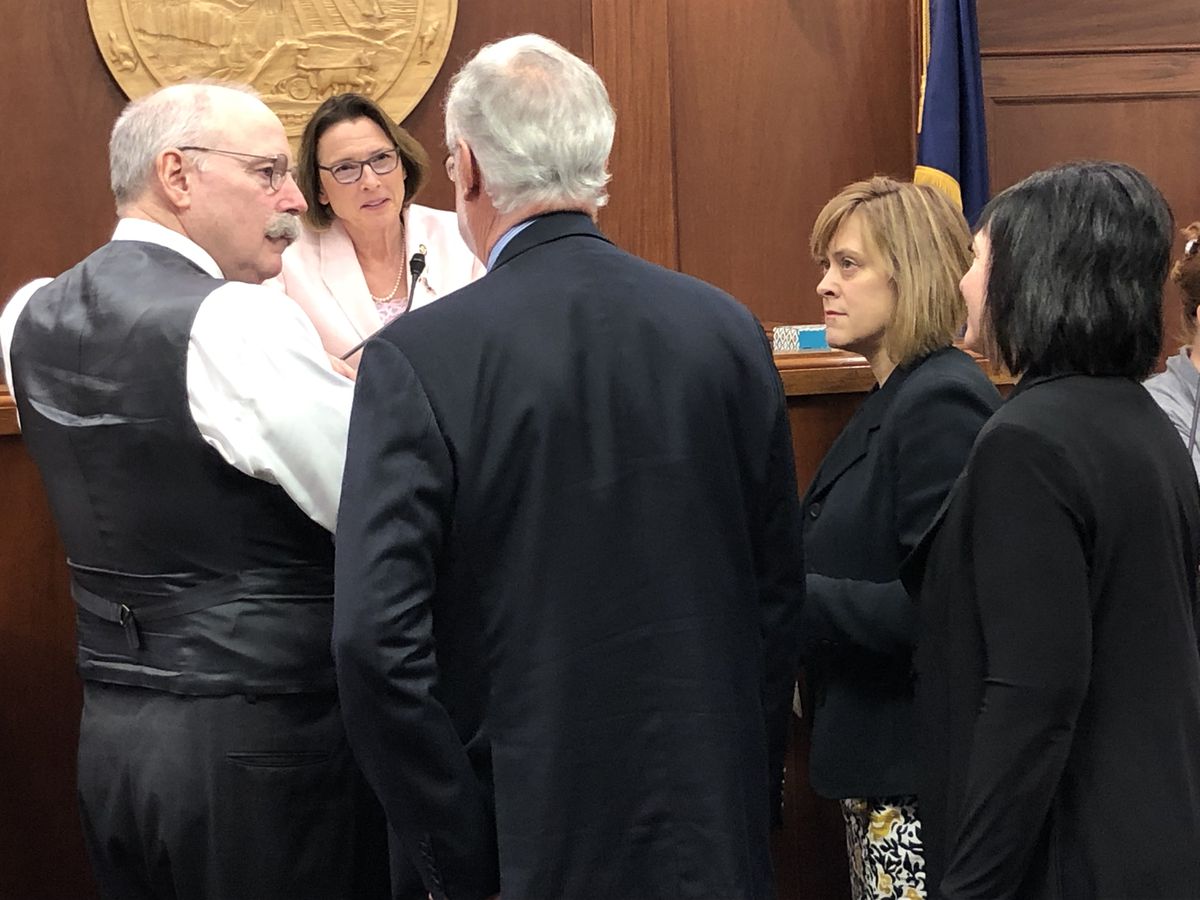 JUNEAU — The Alaska Senate has failed to pass legislation setting the amount of this year’s Permanent Fund dividend, plunging the Alaska Legislature deeper into budgetary deadlock with less than four weeks remaining until a statewide government shutdown.

Tuesday’s 10-8 vote on a $3,000 Permanent Fund dividend was one vote shy of the 11 votes the proposal needed to pass, but the concept may rise from the grave in three days.

Sen. Mike Shower, R-Wasilla, was absent from Tuesday’s vote but is expected to be back in the Capitol on Friday. Shower is a supporter of the traditional dividend formula, which calls for a $3,000 dividend this year.

For nearly a month — through the end of the Legislature’s regular session and the first two and a half weeks of a special session — House and Senate have been unable to finish work on a compromise version of the state operating budget because of differences over the Permanent Fund dividend.

Earlier this year, the Alaska Senate inserted a $3,000 dividend within its draft operating budget. The coalition House majority has been supporting a smaller dividend that does not require spending from savings or overdrawing from the Permanent Fund.

The Legislature needs to pass — and the governor must sign — an operating budget before July 1 in order to avoid a government shutdown.

Here’s the vote on the $3,000 dividend amendment. #akleg pic.twitter.com/lX8AOi5hBM

On Monday, the Senate proposed Senate Bill 1002 for the dividend in order to divide the question. If that legislation were to pass House and Senate, the rest of the operating budget could advance separately to the governor’s desk.

As originally proposed, SB 1002 proposed a $1,600 dividend. Several senators vied for the opportunity to propose an amendment increasing the amount to $3,000, the amount called-for under the traditional dividend formula.

The amendment, which required only a majority of those present, was adopted 10-8 but died with the failure of the bill.

Speaking in favor of the amendment, Hughes said Alaskans have urged her to follow the traditional formula in state law.

“I’ve heard the public loud and clear,” she said.

Senators who opposed the amendment warned that the $3,000 dividend would require spending more from the Permanent Fund than it can generate in investment income.

Von Imhof said that according to her calculations, a $3,000 dividend requires spending 8.7% of the Permanent Fund’s average value over the past five years. Legislation passed last year requires the state to spend no more than 5.25% of that value, because projections indicate the fund can earn 6.5% per year on average.

According to figures from the nonpartisan Legislative Finance division, the state is projected to have $5.2 billion to spend when the fiscal year begins July 1. The House and Senate have proposed budgets that would spend about $4.6 billion. That leaves about $629 million surplus to be used for dividends.

It is not yet clear how much spending the governor will veto.

“A balanced budget amendment would permit about a $900 dividend,” said Sen. Chris Birch, R-Anchorage. “All this amendment does is it digs a deeper hole. It erodes the Permanent Fund.”

But Birch’s view was in the minority. More senators said it is inappropriate to consider the dividend just another government appropriation.

Source of the money

Wielechowski cited legislative writings from the early 1980s to declare that when the dividend was created, it was intended to be paid first, not last, and represents Alaskans’ collective share of mineral wealth and investments.

As written, SB 1002 called for diverting money from a state savings account and a University of Alaska college scholarship fund in order to pay a $1,600 dividend. Hughes and others objected to that system as well as the amount.

Using funding sources other than the Permanent Fund would “change the dividend check into a government payout check, and that is simply not what the dividend is all about,” Hughes said.

The Hughes amendment would have instead used money from the $19 billion Permanent Fund earnings reserve. The fund has sufficient money, but lawmakers are already counting on a $2.9 billion transfer from the Permanent Fund this year. That is the limit, under a law passed last year, and a larger dividend likely requires breaking the limit.

“We’re going to have violations of the statutes one way or another to meet our obligation,” said Sen. Bert Stedman, R-Sitka.

Senate President Cathy Giessel, R-Anchorage, said late Tuesday that the Senate will hold floor sessions daily from Wednesday through Friday. Within the 14-member Senate majority, there is a verbal agreement that the state budget will not advance until both House and Senate approve SB 1002.

If Shower’s arrival on Friday allows SB 1002 to pass, it would then go to the House for consideration.

In a statement after the Senate’s vote, Speaker of the House Bryce Edgmon, I-Dillingham, said the House and Senate should pass a state operating budget without a dividend, then take up the dividend separately.

The statement said in part, “we believe the Legislature should first pass a responsible budget to provide students, elders, and business leaders certainty in the critical services they rely on. Then we can focus on the many important questions surrounding the future of the Permanent Fund.”

Speaking Tuesday afternoon on the Mike Porcaro KENI-AM radio show, Gov. Mike Dunleavy reiterated that anything other than a $3,000 dividend that follows the traditional formula is unacceptable to him this year.

“If there’s any shenanigans, I’ll do what is necessary … and that may very well include vetoing a bill that comes out that doesn’t follow the statute,” he said.

Some lawmakers have said they might be willing to support a traditional dividend if the formula is changed moving forward. The governor is unwilling to allow lawmakers to consider those changes in this special session.

“Pass the transfer, then let’s sit down and see what kinds of conversations” we can have, he told reporters in an interview.