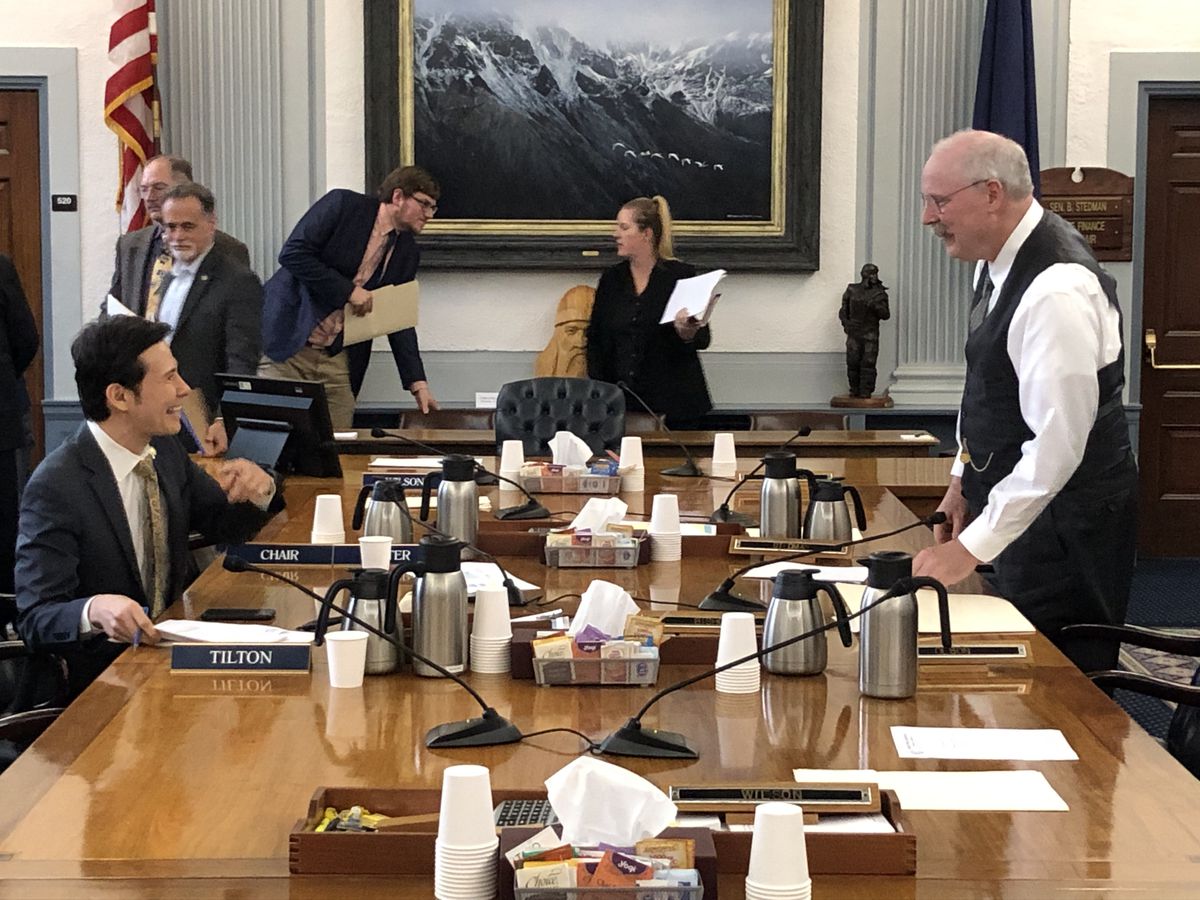 JUNEAU — Seeking to avoid a statewide government shutdown on July 1, negotiators in the Alaska House and Senate are advancing a compromise budget proposal toward final votes in the next couple of days. The budget contains about $170 million in cuts from the current year’s budget but is higher than proposed by Gov. Mike Dunleavy in February.

The compromise doesn’t mention the Permanent Fund dividend, which will be addressed in separate legislation. The amount of this year’s dividend remains undecided because of disagreement among the governor and the leaders of the House and Senate.

“The position is not a zero dividend. It is technically not being addressed in this budget at all,” said Sen. Bert Stedman, R-Sitka and one of the lead Senate negotiators. “My personal opinion is that the Legislature will be paying a dividend in October of this year.”

Saturday’s agreement does include a transfer of about $10.5 billion from the unprotected portion of the Alaska Permanent Fund into the constitutionally protected corpus. That figure includes $1.1 billion in inflation-proofing payments plus a $9.4 billion transfer.

“It’s the biggest appropriation, I think ever,” Stedman said.

As Rep. Tammie Wilson, R-North Pole, said Saturday night, the Legislature has a track record of using savings accounts to balance the budget. Shifting money into the constitutionally protected corpus prevents the Legislature from spending that money.

“First of all, it’s protected. It can only be removed by a vote of the people,” she said, explaining the reasons for the shift.

Though the transfer is a tremendous sum — enough to buy much of the National Hockey League — the issue of the dividend is what has been the chief cause of the ongoing delay in passing the state’s operating budget.

By splitting off the dividend as a separate issue, lawmakers hope to gain time to break the impasse while avoiding a government shutdown. The Senate is expected to vote Monday on separate dividend legislation and the budget. Whether the House will follow suit remains uncertain.

For that reason, Sen. Donny Olson, D-Golovin, and Rep. Cathy Tilton, R-Wasilla, voted against removing the dividend from the budget.

Whether the governor will agree or disagree remains to be seen. In a call with reporters Tuesday, and in a subsequent radio interview, the governor said he wants to see lawmakers approve a $3,000 dividend that follows the traditional payout formula. (Some lawmakers say such a payout would require too much use of savings, given current levels of spending.)

Asked whether he would veto a budget that does not include a dividend amount, he said, “We’re going to cross that bridge when we come to it.”

According to figures from the nonpartisan Legislative Finance Division, the compromise budget contains about $4.4 billion in so-called “undesignated” money from tax dollars. The actual spending is higher once fee-funded programs (such as tuition for the University of Alaska) and programs funded with federal money (such as Medicaid) are included.

The compromise budget rejects many of the budget cuts proposed by the governor in February, and it also rejects his proposals to take revenue from cities and boroughs. The governor had proposed $3.6 billion in undesignated general fund spending, according to Legislative Finance Division figures.

Though lawmakers didn’t take all of the governor’s cuts, their $170 million budget reduction appears to be among the largest year-over-year cuts in the history of the state’s operating budget.

If approved by lawmakers and the governor, the budget would trim tens of millions from the Alaska Marine Highway System and Medicaid, $5 million from the University of Alaska and millions from the state’s Pioneer Homes.

Those cuts were negotiated in months of work within the House and Senate, and then by negotiators reconciling the differences between different drafts approved by the two legislative bodies.

The state’s capital construction and renovation budget, not addressed Saturday, is expected to contain between $180 million and $200 million in spending when complete. That budget does not need to be complete before July 1 to avoid a shutdown and has been a lower priority for lawmakers. Two years ago, when lawmakers came within a week of a government shutdown, the capital budget didn’t pass the Legislature until the end of July.