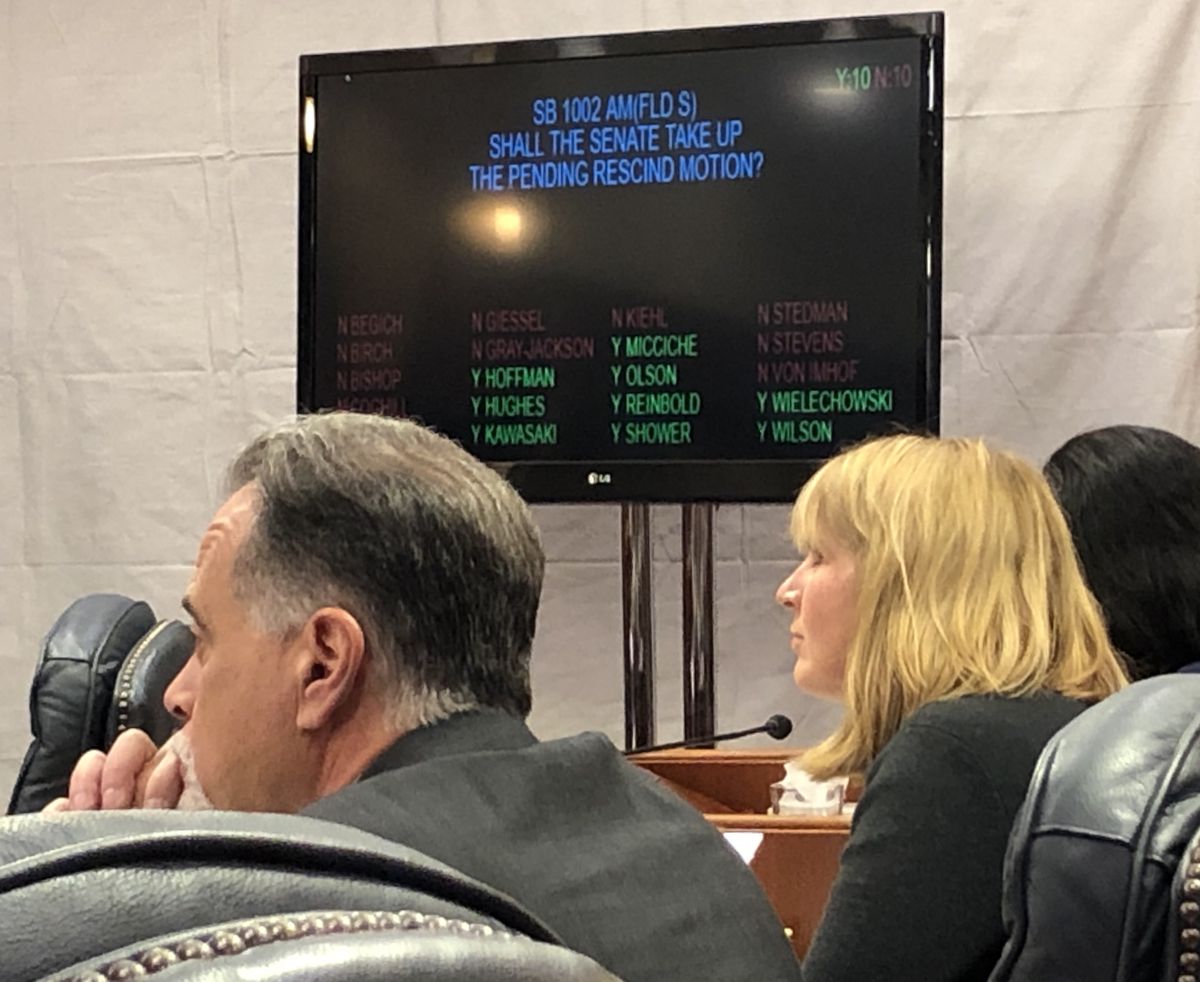 Sen. Peter Micciche, R-Soldotna, and Sen. Natasha von Imhof, R-Anchorage, wait as votes on Senate Bill 1002 are tallied Monday, June 10, 2019. "Yes" votes were to bring the bill up for a revote and eventual passage. "No" votes were to not revote and were against the legislation. (James Brooks / ADN)

Sen. Peter Micciche, R-Soldotna, and Sen. Natasha von Imhof, R-Anchorage, wait as votes on Senate Bill 1002 are tallied Monday, June 10, 2019. "Yes" votes were to bring the bill up for a revote and eventual passage. "No" votes were to not revote and were against the legislation. (James Brooks / ADN)

JUNEAU — One vote shy of the 11 needed to reverse a failed vote last week, the Alaska Senate on Monday definitively killed legislation that would have provided a $3,000 Permanent Fund dividend to Alaskans this year.

Senators then proceeded to pass a compromise state operating budget that does not set a dividend amount, effectively leaving the argument for a second special session.

“I’m not expecting the dividend to be concluded by Friday,” said Sen. Bert Stedman, R-Sitka. That’s the day the current special session will expire.

Stedman, co-chair of the Senate Finance Committee, said Alaskans should not doubt that there will be a dividend, even if it takes more time.

“We’re going to have a dividend this fall, one methodology or another,” he said.

Though senators didn’t agree Monday on a dividend amount, they concluded that disagreement was not worth shutting down Alaska’s state government. July 1 is the start of the state’s fiscal year, and if lawmakers do not approve an operating budget before that date, the state’s government cannot function.

Last week, House and Senate negotiators agreed to separate the dividend from the budget. Until that point, disagreement over the amount of the dividend had prevented the budget from advancing.

The $3,000 dividend, which would have been paid using the traditional formula in state law, is supported by Gov. Mike Dunleavy but lacks the support of the coalition House majority — and it appears to lack sufficient support in the Senate as well.

Senate Bill 1002, proposed by the Senate as part of a compromise to allow a vote on the rest of the state’s operating budget, was defeated last week.

Proponents of the measure needed just one more vote to send the bill to the House, and with two members absent from that first vote, including a supporter of the traditional dividend, it appeared they would have no trouble getting that vote in time for a revote Monday.

But Sen. Elvi Gray-Jackson, D-Anchorage, changed her position in the six days between the first vote and the second, causing SB 1002 to die on a procedural vote, 10-10.

“I voted for a $3,000 Permanent Fund dividend three times … but right now, I just want to see us continue to work together and come to some kind of consensus on what the dividend’s going to be so we can just move on,” she said of her changed vote.

Gray-Jackson said she believes it is necessary for the House and Senate to agree this year on a new formula for the Permanent Fund dividend.

Many other lawmakers support that view as well, and both the House and Senate have passed a resolution calling for the creation of an eight-member House-Senate working group to come up with a consensus proposal.

The issue of the dividend has deeply divided the 14-member majority that controls the Senate: Seven members support paying a traditional dividend this year; the other seven do not.

On Monday, after their defeat, the proponents of the traditional dividend reluctantly voted in favor of the compromise budget, even though it lacks a dividend. Had they voted against the budget, breaking the rules of the majority caucus, the Senate could have dissolved into a leadership struggle akin to the one that divided the Alaska House of Representatives at the start of the year.

Sen. Shelley Hughes, R-Palmer, said afterward, “It’s not over yet.”

“I don’t think this governor is afraid of a government shutdown, and I wouldn’t be surprised if he uses (his veto),” she said.

In a message spread on social media, the governor said he was reserving his options as he reviews the budget.

“In the coming days, I will review & scrutinize the budget passed by (the Legislature) & determine the best path forward, including options to accept the budget as passed, to veto the budget in its entirety, or to veto portions of the budget to better align expenditures & revenues,” he wrote on Twitter.

In the coming days, I will review & scrutinize the budget passed by #akleg & determine the best path forward, including options to accept the budget as passed, to veto the budget in its entirety, or to veto portions of the budget to better align expenditures & revenues. (1/2)

In addition to a simple up-or-down veto of the budget, the governor has the power to veto line items or reduce individual appropriations.

Stedman said he would not be surprised if the governor used that power before signing the budget into law. As an example, Stedman said he expects “a few more reductions” in the Department of Health and Social Services.

In the remaining days of the special session, lawmakers are expected to consider the state’s capital construction and renovation budget, which has passed the Senate but is expected to undergo amendments in the House Finance Committee.