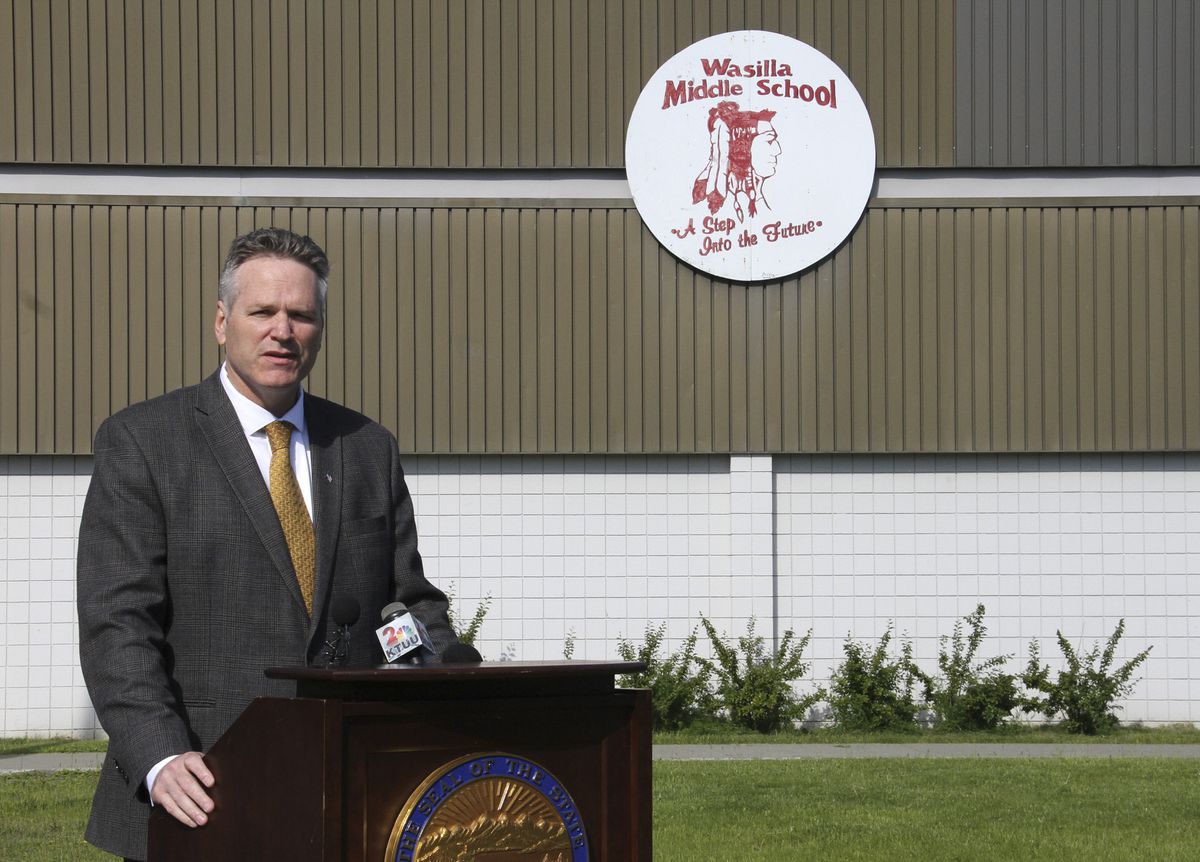 Alaska Gov. Mike Dunleavy speaks at a news conference Friday, June 14, 2019, in Wasilla, Alaska. Dunleavy has called lawmakers into special session July 8 in Wasilla, and his administration gave a tour of the recommended site at Wasilla Middle School to reporters. (AP Photo/Mark Thiessen)

Alaska Gov. Mike Dunleavy speaks at a news conference Friday, June 14, 2019, in Wasilla, Alaska. Dunleavy has called lawmakers into special session July 8 in Wasilla, and his administration gave a tour of the recommended site at Wasilla Middle School to reporters. (AP Photo/Mark Thiessen)

JUNEAU — Members of the Alaska Legislature who back a traditional Permanent Fund dividend appear to have enough support to force lawmakers to convene a special session on July 8 at Wasilla Middle School.

[Budget in his hands, Gov. Dunleavy has a little over two weeks to make changes]

“As far as location, we’re all of one mind on going to Wasilla and following what was put out there,” said House Minority Whip DeLena Johnson, R-Palmer, speaking of her caucus.

Senate Majority Leader Mia Costello, R-Anchorage, said, “From where I sit right now, it looks like the governor’s call gives us the best opportunity to get the job done.”

The issue of the Permanent Fund dividend is the sole item on the governor’s special session agenda, though he has said he would be willing to add other items to that agenda — such as the unfinished capital budget — if the dividend is resolved.

On Friday, Dunleavy held a press conference at Wasilla Middle School to explain his support for holding a special session more than 500 miles away from the state capital and nearly 50 miles from the state’s largest city.

“No mistake about it: Juneau is the capital, but we’ve been having a hard time coming to a resolution on (the dividend). This is an opportunity to hear from Alaskans,” Dunleavy said, explaining that a location on the road system would allow greater public access to the Legislature.

Anchorage, as the state’s transportation hub, would offer even easier access to legislative hearings on the dividend, but when asked why Wasilla is preferable, the governor said, “We’ve had a special session in Anchorage. We haven’t had one here in the Mat-Su.”

The Legislature convened a 2015 special session in Anchorage, overriding then-Gov. Bill Walker, who had called for it to take place in Juneau.

Rep. George Rauscher, R-Sutton, was present at the governor’s press conference and said, “It is central to the state. It’s very accessible. There are a lot of accommodations. I think that people will now have access to their legislators.”

Wilson, though he “would love to have the Legislature come meet in my home district,” pointed out that lawmakers still could end up holding hearings in places other than Wasilla during the special session.

“Those are options available to those chairs of committees and the presiding officers,” he said.

In a potential sign of things to come, the bicameral working group in charge of negotiating a compromise on the dividend has scheduled a hearing for Wednesday morning. It will take place in Anchorage.