Why not Wasilla for a second special session? Legislators cite cost, accessibility 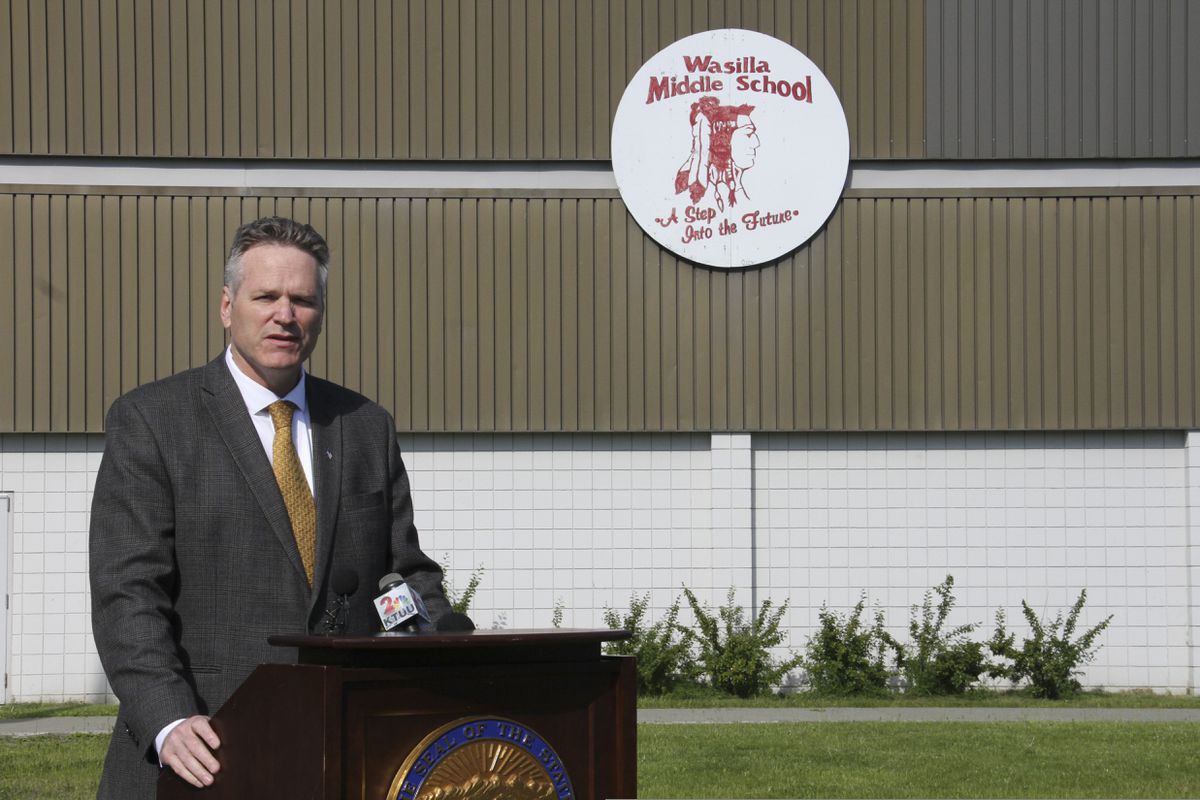 This June 14, 2019, photo shows Alaska Gov. Mike Dunleavy speaking at a news conference at Wasilla Middle School. Dunleavy has called lawmakers into special session in Wasilla beginning July 8, but some lawmakers have expressed concerns over security and logistics with the location more than 500 miles from the state capital of Juneau. (AP Photo/Mark Thiessen)

This June 14, 2019, photo shows Alaska Gov. Mike Dunleavy speaking at a news conference at Wasilla Middle School. Dunleavy has called lawmakers into special session in Wasilla beginning July 8, but some lawmakers have expressed concerns over security and logistics with the location more than 500 miles from the state capital of Juneau. (AP Photo/Mark Thiessen)

JUNEAU — A day after the leaders of the Alaska Legislature said they will not follow Gov. Mike Dunleavy’s order to hold a special session in Wasilla, rank-and-file members offered their reasons for supporting a session in Anchorage and Juneau.

A majority of the Legislature’s 60 members — 40 in the House and 20 in the Senate — say they support a special session away from Wasilla because it will be cheaper and more accessible to Alaskans. Under the alternative proposal, the Legislature will hold some hearings in Anchorage to allow public input, but official votes will be taken in Juneau, where TV broadcasts are available under a city-funded program.

“It’s not about Wasilla or not, it’s about what’s the most accessible to Alaskans and what’s most efficient in terms of not wasting money,” said Rep. Zack Fields, D-Anchorage.

While Wasilla is on the road system, unlike Juneau, a session held at Wasilla Middle School would lack coverage from the statewide TV broadcast funded predominantly by the City and Borough of Juneau. That broadcast, known as Gavel Alaska, is the state’s equivalent of C-SPAN. In addition, both the Capitol and the Anchorage Legislative Information Office (where lawmakers envision holding financial meetings) are already wired for streaming broadcasts.

“Any venue besides the Capitol building creates some logistics that make it less accessible for people who can’t be there physically,” said Rep. Sara Hannan, D-Juneau.

Hannan represents the district that contains the Capitol but flew to Anchorage for last week’s meeting of a House-Senate working group discussing the Permanent Fund.

Given public interest, “I expected the room to be plugged full,” she said, but when she arrived, “virtually everyone in the room, you could identify as the regulars or the press,” she said.

When declaring Wasilla as the Legislature’s meeting location, Dunleavy said he did so with an interest in making the hearings more physically accessible.

If that were true, said Rep. Louise Stutes, R-Kodiak, a better location would be Anchorage.

“That’s the hub. People that are really involved and want to fly in … Anchorage is much more accessible to those individuals than Wasilla is, most certainly,” she said.

“It’s fiscally the responsible thing to do,” said Rep. Dan Ortiz, I-Ketchikan, of the plan to meet in Juneau.

Those two estimates operate under different expectations of attendance, however, and legislative expense payments are one of the biggest cost drivers for any special session. Using similar expectations, the difference between the two plans is about $200,000, according to estimates provided by members of the Republican House minority, which is in favor of a Wasilla location.

Though all of the lawmakers contacted by the Daily News said cost and accessibility were their first concerns, the boundary between those who support Wasilla for the special session and those who support another location almost precisely matches the divide over the Permanent Fund dividend.

That isn’t universally true — several members of the coalition House majority and members of the Democratic Senate minority who voted in favor of the traditional dividend are supporting a location other than Juneau.

He said he believes “the governor is aware that his supporters are in greatest numbers in the Mat-Su” and that a special session called there could pressure lawmakers into supporting a traditional dividend.

Other lawmakers expressed similar thoughts, but Josephson doesn’t think that strategy would be effective.

“I don’t think that meeting in Wasilla would have changed my position on the questions that remain before us,” he said.

Even with the Legislature’s announcement, there remains some doubt about what will happen July 8. A law that appears to give the governor the authority to order legislators to a particular location has been called into constitutional question, while supporters of the Wasilla location may be prepared to defend that law in court.

“I am hearing that there are people interested in filing a lawsuit against the Legislature,” said Rep. Colleen Sullivan-Leonard, R-Wasilla and co-chairwoman of the Legislature’s nine-member Mat-Su contingent.

Given the tight timing, it’s not certain what effect a lawsuit would have before July 8.

“At this point, I’m not sure if I’ll be in Wasilla or Juneau,” said Rep. Gary Knopp, R-Soldotna.

“I don’t know what’s going to happen on the 8th, but I know I’ve got a ticket to Juneau. We’ll see what happens,” she said.