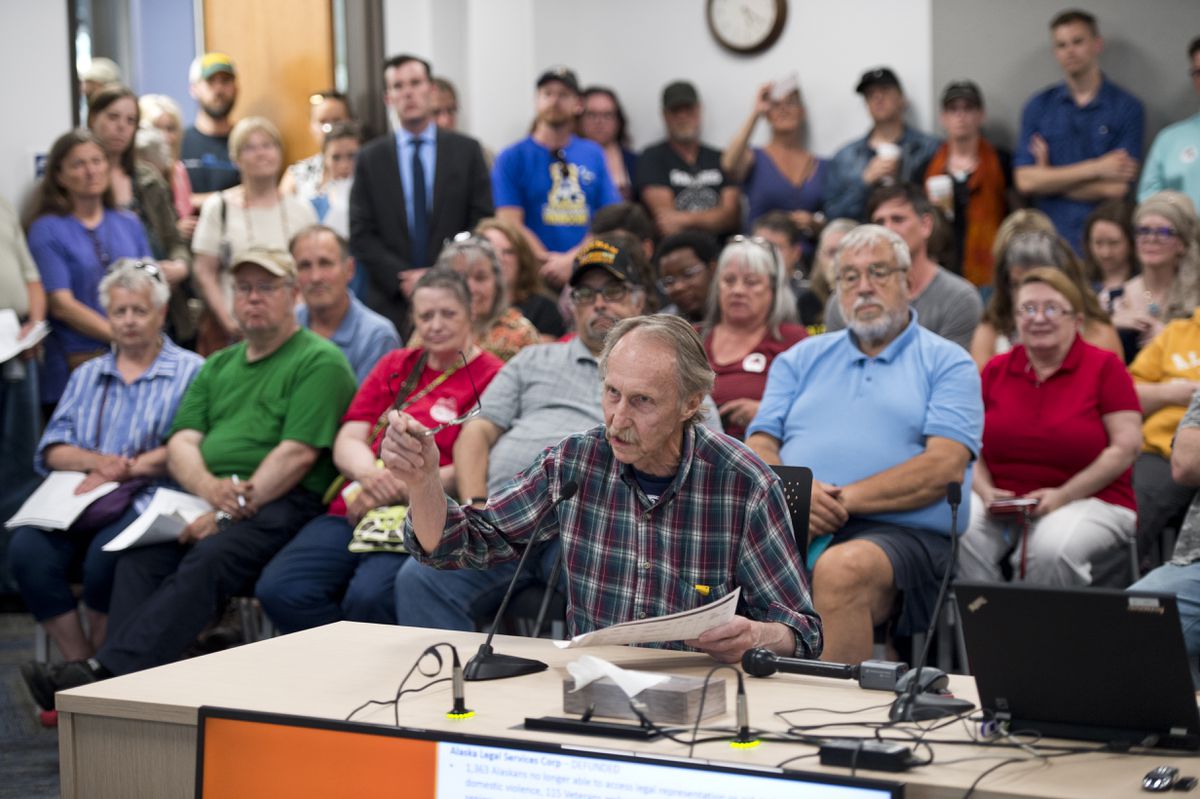 Steve Lewis makes a statement to legislators during a listening session with legislators. Opponents of Gov. Mike Dunleavy's budget vetoes gathered to rally outside the Legislative Information Office in Anchorage on July 2, 2019. (Marc Lester / ADN)

Steve Lewis makes a statement to legislators during a listening session with legislators. Opponents of Gov. Mike Dunleavy's budget vetoes gathered to rally outside the Legislative Information Office in Anchorage on July 2, 2019. (Marc Lester / ADN)

An emotional, overflow crowd in Anchorage urged lawmakers Tuesday night to override Gov. Mike Dunleavy’s $444 million in vetoes to the state budget, saying they will devastate the economy and health care and lead to more homelessness, crime and poverty.

“The only word that comes to mind for this spread of budget cuts is simply evil,” said Steve Lewis, a retired petroleum engineer.

"Why do we support the richest corporations in the world, when we are cutting money for the poor?” said Bob Reupke, echoing frequently expressed views that oil producers should pay more to help close the state’s $1.6 billion deficit.

“If these vetoes go through we will have hundreds more homeless people on the streets by end of July,” said the Rev. Matthew Schultz, an Anchorage pastor.

More than 70 people spoke at the two-hour meeting at the Legislative Information Office in a listening session organized by Anchorage Democrats who oppose the vetoes. Many more signed up to speak or provided written comments. Thirteen lawmakers attended, most from Anchorage.

Gov. Mike Dunleavy announced the 182 line-item budget vetoes on Friday, including $130 million in cuts to the University of Alaska, sparking fears more than 1,300 jobs will be lost there, and $50 million in cuts to Medicaid services, atop the $70 million reduction already approved by the Legislature.

A few people said they favored the vetoes, complaining that the state’s generous benefits for Medicaid are too costly, and the university system performs poorly. Some expressed support for the governor’s plan to pay a large $3,000 Permanent Fund dividend to Alaskans, despite the cuts, countering calls by veto critics who said the dividends should be smaller to allow state services to survive.

“Our PFDs were never meant for you to take,” Big Lake resident Bert Houghtaling said to lawmakers.

Outside in the parking lot, hundreds of people gathered for a rally organized by Save Our State and other groups, chanting opposition to the vetoes and waving signs including “Dunleavy to voters: Suckers” and “Do not veto my future."

Inside, Alaskans spoke in dire terms about the consequences of the cuts. The reductions to the university system mean some of the state’s best and brightest Alaskans won’t attend college in the state or work here, they said. The job losses will lead to a glut of housing on the market and falling property values, they said.

A 69-year-old woman speaking by phone cried while talking about the governor’s elimination of the senior benefits program, following a $20.8 million veto. The income-based program provided monthly assistance to more than 11,000 Alaskans.

“What else are you doing to us old people?” she said. “We’re already in dire straits. Now we’re even worse off than we were before.”

“I view these cuts as a threat to my life,” said Jonathon Hazelton, a young man who said he’s autistic and suffers from depression. He’s concerned the Medicaid cuts will hurt his ability to get medication and services.

Overriding the vetoes will require approval by at least 45 of 60 state lawmakers in special session.

For overrides to pass, it’s likely some members of the 15-member Republican House minority will have to support it. Three of those minority members attended the meeting, Reps. Laddie Shaw and Sara Rasmussen of Anchorage, and Rep. Kelly Merrick of Eagle River.

After the testimony, Shaw said he has concerns about the impacts of the cuts to people, including to senior citizens. He said he’ll study each veto closely but offered no clue where he’ll fall.

“I won’t make a commitment,” he said.

Merrick also wouldn’t say where she stood, but said overrides were unlikely.

“I don’t think there will be veto overrides,” she said.