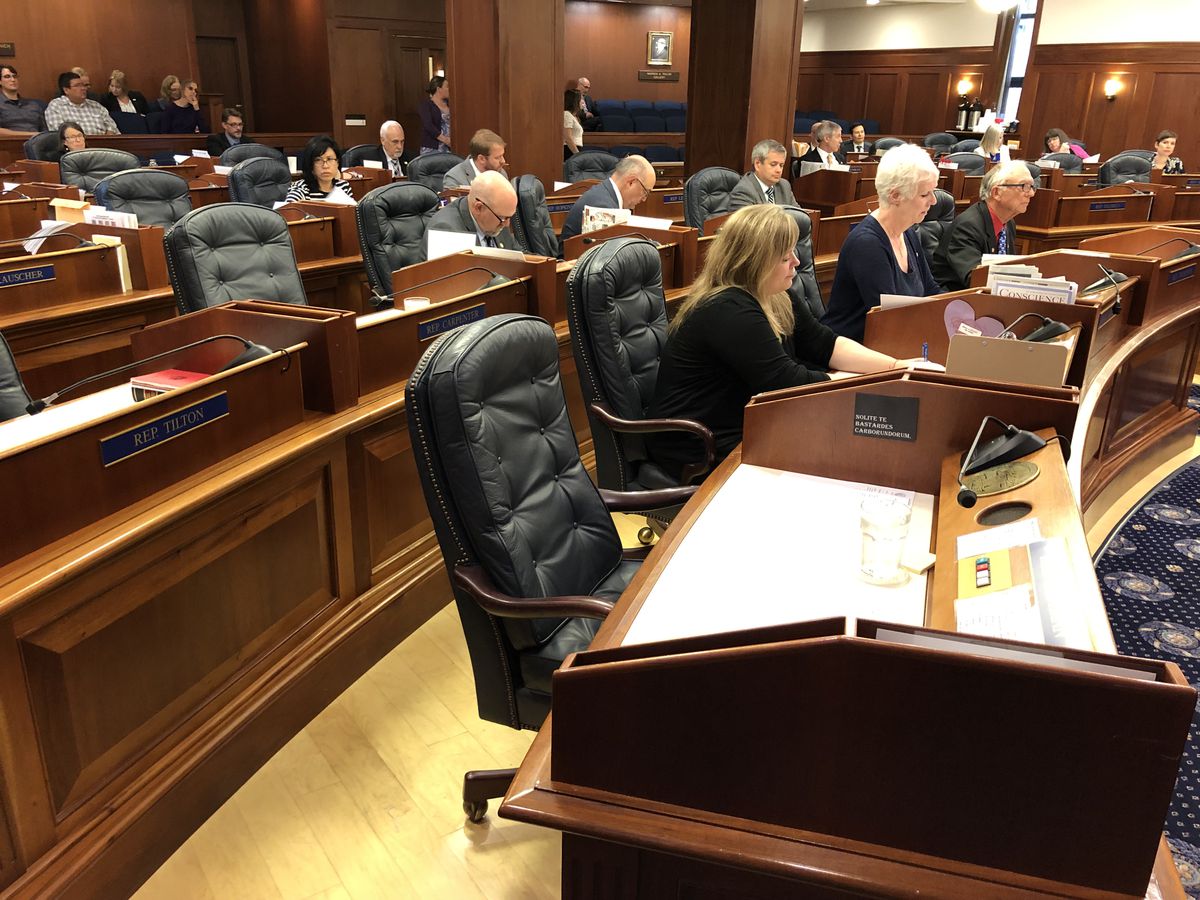 Members of the Alaska House of Representatives meet Monday, July 8, 2019 in Juneau. Several members, including Rep. David Eastman, R-Wasilla, whose desk is at center, were absent in Wasilla, claiming that city is the rightful location for the session. (James Brooks / ADN)

Members of the Alaska House of Representatives meet Monday, July 8, 2019 in Juneau. Several members, including Rep. David Eastman, R-Wasilla, whose desk is at center, were absent in Wasilla, claiming that city is the rightful location for the session. (James Brooks / ADN)

• A majority from both the House and Senate convened in Juneau Monday afternoon. A smaller group of legislators gathered in Wasilla, but without a quorum, couldn’t take up business and broke up about 15 minutes later.

• Sen. Mia Costello, R-Anchorage, was stripped of her status as majority leader by the Senate majority and replaced by Sen. Lyman Hoffman, D-Bethel.

We’ll be updating and expanding our coverage through the day, so check back.

Senate Majority Leader Mia Costello, R-Anchorage, has been stripped of her role and will be replaced by Sen. Lyman Hoffman, D-Bethel. Speaking after the decision, Senate President Cathy Giessel, R-Anchorage, said the Senate needs a majority leader now that the special session has begun. Costello was among four senators in Wasilla and absent from Juneau as the special session began.

In the House, lawmakers have introduced legislation that would pay a $1,600 Permanent Fund dividend this year. The bill, House Bill 2001, will be discussed in a 2 p.m. meeting of the House Finance Committee. An additional meeting has been scheduled for 9 a.m. tomorrow to discuss the legislation.

According to the official tally compiled by the House Clerk and the Senate Secretary, 14 senators and 23 Representatives are in Juneau. Seventeen representatives and four senators are in Wasilla.

Rep. Tammie Wilson, R-North Pole, is the only member of the House coalition majority to be in Wasilla instead of Juneau. As late as yesterday, members of the majority had thought Wilson would be in Juneau.

Meanwhile, more than 200 people packed a gym at Wasilla Middle School to watch the meeting of four senators and 17 representatives. They cheered and whistled when the lawmakers walked into the gym, taking their seats at tables set up in the middle of the room.

Without a quorum, the group of lawmakers could not take up official business on Monday. They ended the meeting 15 minutes after it started.

Speaking to reporters at Wasilla Middle School, Costello said she learned she had been stripped of her leadership position “while I was here standing up for the constitution, which I took an oath to.”

“I believe we worked all session long on a whole host of issues and we weren’t able to resolve all of them and that the governor’s call is what I’m supporting,” she said. “I have been willing to work with the leaders. I have repeatedly told everybody that in order to get through this we all need to work together and with the governor, and so I will continue to be that leader for my district and the state no matter what label I have attached to my name.”

The joint session will be at 11:30 a.m. Wednesday, according to a joint statement from Senate President Cathy Giessel, R-Anchorage, and House Speaker Bryce Edgmon, I-Dillingham.

The announcement came after a deeply divided Alaska Legislature took the unprecedented step of convening a special session in Juneau, with a smaller group, following the will of Dunleavy, meeting in Wasilla. Fourteen of 20 senators were in Juneau on Monday, with 23 of 40 House members.

“Alaskans now understand the gravity of our budget dilemma,” Giessel said in a written statement. “Seniors, college students, and victims of domestic violence are just a few of the Alaskans who are impacted. Wednesday will be legislators’ chance to approve or reject the governor’s budget vetoes.”

“The governor’s budget threatens to send Alaska into deep economic recession and fails to address the underlying problems that create budget challenges year after year,” Edgmon wrote. “The cut to the University of Alaska is thoughtless and anti-business. Taking reliable income from financially vulnerable elders is cruel and unnecessary. Stepping away from the state’s commitment to help pay for school construction is a broken promise and a hidden tax increase. I urge lawmakers to stand together on Wednesday and reject these damaging vetoes.”

Members of the Alaska Legislature are gathering separately in Wasilla and Juneau on Monday, preparing to begin a troubled special session needed to address the Permanent Fund dividend, budget vetoes and the unfinished state capital budget.

In Juneau, where most lawmakers will begin the special session, hundreds of protesters are filling the street in front of the Capitol, chanting “override” while listening to a handful of speakers.

In Wasilla, where a bloc of pro-traditional-dividend lawmakers has gathered, protesters for and against the traditional dividend are exchanging chants in front of Wasilla Middle School.

The size of the crowd is difficult to see from the ground. Here’s the view from the fifth floor of the #akleg capitol: pic.twitter.com/pa1eL4vud2

Legislators are walking into the middle school gym to cheers and whistles. pic.twitter.com/z6qCqHrcLP

Reporting by James Brooks in Juneau and Tegan Hanlon in Wasilla.