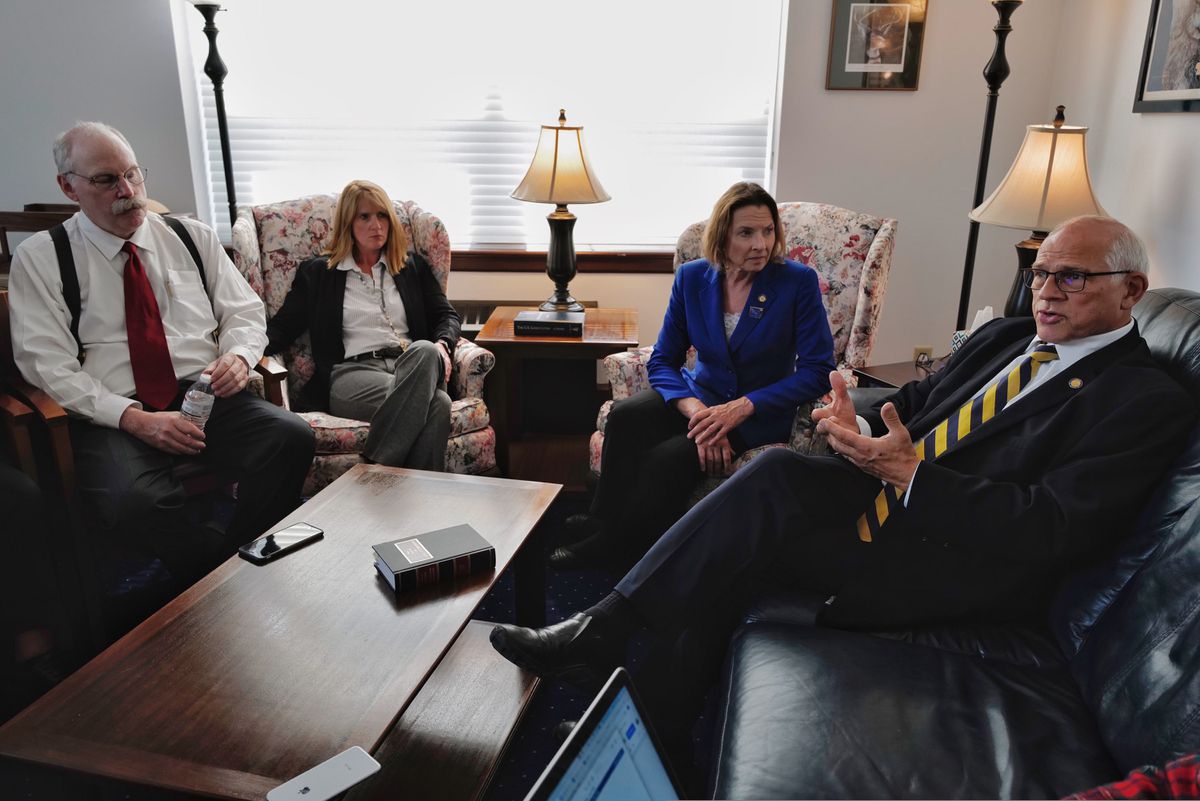 Typically, some of the most intense fights at the Alaska state Capitol are between factions of Democratic and Republican lawmakers.

But one of the biggest ideological fractures complicating this year’s legislative session is within the GOP. And that’s creating some strange bedfellows as legislators fight over Republican Gov. Mike Dunleavy’s line-item budget vetoes.

To understand where this story is going, you have to go back 2 1/2 years, to when labor leader Vince Beltrami was running for state Senate against an incumbent Anchorage Republican, Cathy Giessel. The campaign, to put it mildly, got a little chippy.

Beltrami, in one video ad, accused Giessel of “name-calling,” and said she didn’t have “a record to run on.”

Fast forward to a month ago, when Beltrami — who lost the election – was at the Alaska Oil and Gas Association’s annual conference and ran into Giessel, who’s now Senate president. To reiterate, two years ago, Beltrami and Giessel were sworn enemies.

“Walked up, shook my hand, we talked for a minute, and I said, ‘You’re doing the right thing,’” said Beltrami, president of the Alaska AFL-CIO. “I think she was a little flabbergasted to hear that from me.”

It’s rare for Giessel and Beltrami to agree on almost anything, politically. But in the current standoff between Dunleavy and the Legislature, many Republican lawmakers, including Giessel, are defecting, and they’ve joined with Democrats and moderates to oppose the Republican governor.

During Wednesday’s failed vote to override Dunleavy’s vetoes, Anchorage Republican Sen. Natasha von Imhof lambasted the governor, saying he was purposefully throwing the state into a severe recession. In a phone interview Thursday, she questioned an idea floated by some Republican lawmakers aligned with the governor – that before reducing dividends, the state should consider taxing residents to pay for government services.

“I do not know of any Republican Party in the U.S. that endorses an ever-increasing cash payout from the public treasury. And when you add a tax increase, this is sounding like complete socialism to me,” von Imhof said. “That is a far-leftist or a progressive value. That’s not even a Democrat value. I don’t think Nancy Pelosi’s even talking about that.”

Von Imhof said it’s a Republican principle to balance between competing needs — and that those needs include a prosperous private sector, which in turn calls for government services like education, public safety and human welfare.

Wasilla Sen. Mike Shower is on the other side of the Republican divide from von Imhof — he’s part of the GOP faction that skipped the Juneau vote on the vetoes and instead has been meeting in Wasilla, as Dunleavy asked lawmakers to.

Shower supports deeper cuts than von Imhof, and he said her position on the PFD only holds if you see the dividend as the government’s money. Shower doesn’t — he said the payments are Alaskans’ personal share of profits from the state’s natural resources.

Von Imhof, he said, “is talking about a bigger government that costs more money, and wants to use the dividend money that belongs to the people to pay for the government.”

Experts say that when it comes to the dividend, the split within the Republican Party correlates with income. Wealthier Republicans tend to see the dividend as a government program like any other that can, and should, be diverted to support critical state services.

Those with lower incomes see it as a unique benefit to living in Alaska that shouldn’t be considered part of the government at all.

Those differences are especially glaring right now. But Glenn Clary, the chair of the Alaska Republican Party, said he’s not worried that they’ll plague the party through election season next year.

“I’ve been at this a long time. And the terrain changes every session,” he said in an interview.

Clary said the two sides of the split have to start communicating, and repairing their relationships. And he said party leaders can help with that.

“We would offer ourselves to do that, to bring legislators together so that they can start mending fences and start communicating more, to find those places where they can agree and move on,” he said.

For Beltrami, the labor leader, the GOP’s internal split presents an opportunity. He said polls have shown Dunleavy’s approval rating declining since the vetoes, and Republicans who stay aligned with him will present a big target for groups like Beltrami’s.

“The people that are out in Wasilla that are hitching their wagon to this governor – not to be too hyperbolic, but they are writing their own death warrant in the next election if they’re in districts that are not just so solidly red,” Beltrami said.

Like Clary, though, Beltrami said there’s still plenty of time for things to change. In the mean time, he said, he’s finding himself working with new allies, like Giessel.

This story originally appeared at Alaska Public Media and is republished here with permission.