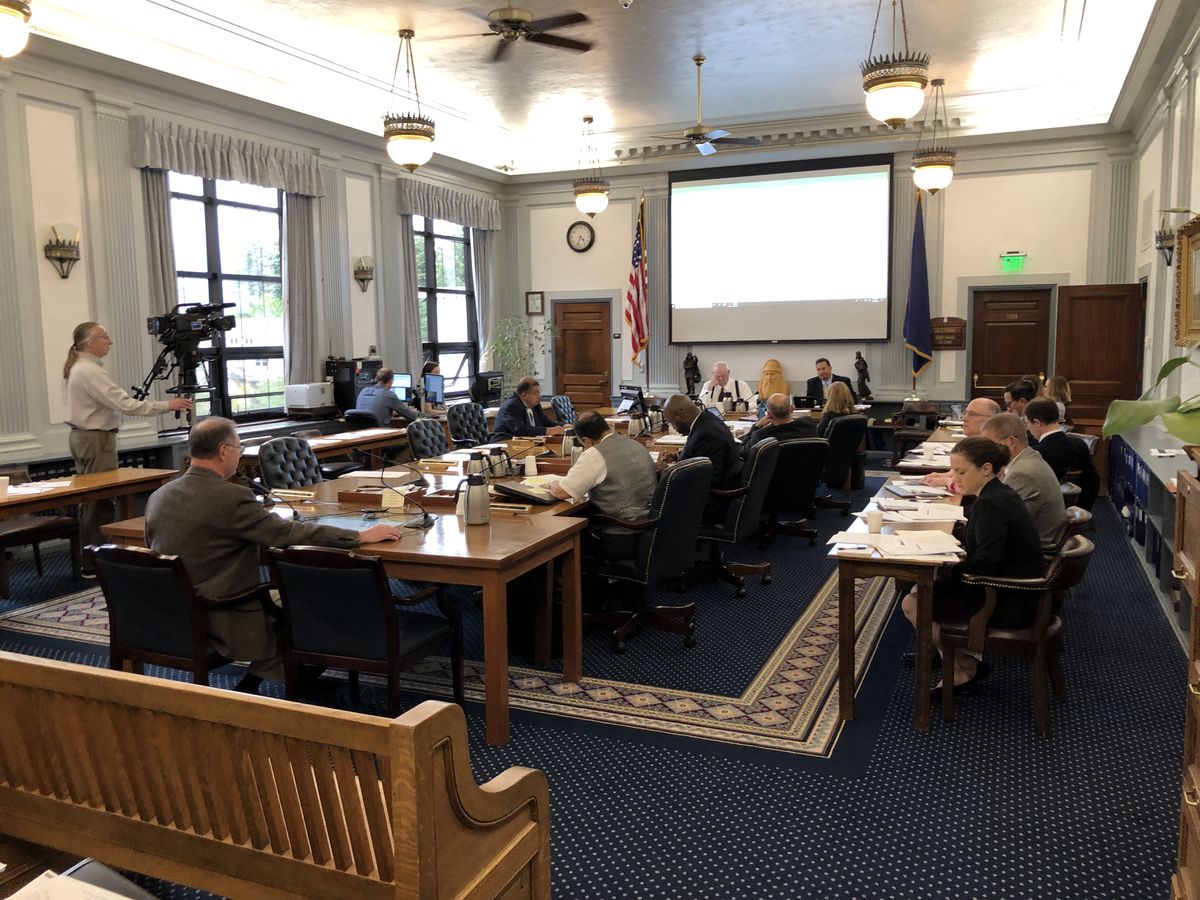 A meeting of the Senate Finance Committee is seen Thursday, July 18, 2019 in the Alaska State Capitol at Juneau. (James Brooks / ADN)

A meeting of the Senate Finance Committee is seen Thursday, July 18, 2019 in the Alaska State Capitol at Juneau. (James Brooks / ADN)

JUNEAU — Alaska lawmakers said Thursday they are prepared to move quickly to fix a broken state capital budget that threatens more than $1 billion in state projects and services, but with the Permanent Fund dividend and the governor’s budget vetoes competing for attention, no compromise has yet been reached to fix the problem.

Last month, Gov. Mike Dunleavy vetoed more than $444 million from the state’s operating budget, but failures within the capital budget could lead to more than $1 billion in additional losses to state programs and services, including road and airport construction, college scholarships, rural electrical subsidies and the state ferry system.

Dunleavy has proposed new legislation to repair the capital budget, but with lawmakers still absent from Juneau, neither the House nor the Senate were able to begin considering his ideas on Thursday. Instead, work will begin Friday morning, and Senate President Cathy Giessel, R-Anchorage, said she and others are preparing to move quickly.

“Part of the thing that slows us down is legal drafting,” she said, explaining the process of physically writing legislation. “(The drafters) have been asked to be all hands on deck over the weekend by both the House and Senate.”

Before a new law can be written, however, lawmakers have to agree on what that law should contain, and that has been a consistent problem for the capital budget, which requires a three-quarters supermajority.

Most legislation requires a simple majority — 21 votes in the House and 11 in the Senate — to advance to the governor. The capital budget requires more votes because it includes a procedure known as the “reverse sweep."

That procedure is required to prevent a state constitutional amendment from automatically draining dozens of state savings accounts into the Constitutional Budget Reserve.

This year, members of the 15-member Republican minority in the House refused to offer their votes for the reverse sweep unless the Legislature approved a $3,000 Permanent Fund dividend first.

It didn’t, and so the state has begun the process of automatically draining those savings accounts, which fund things like scholarships and the state’s Power Cost Equalization endowment, which subsidizes rural power programs.

Already, many college students have been warned that their scholarships will not be paid unless there is legislative action.

Complicating matters is the fact that the Office of Management and Budget has defined the list of drainable programs to include some, such as the power endowment, that were thought to be immune.

Ironically, said David Teal, director of the nonpartisan Legislative Finance Division, the same justification used to drain the Power Cost Equalization endowment could also be used to drain the earnings reserve of the Alaska Permanent Fund, the account that pays dividends.

“If this goes to court, even over PCE … it almost has to expand to the earnings reserve account as well,” Teal said.

“That’s why I say, you simply have no choice other than getting this reverse sweep done,” he said. “The chaos caused by not reversing the sweep is simply massive."

Speaking Wednesday, House Minority Leader Lance Pruitt, R-Anchorage, said his caucus might be willing to adjust its prior position.

“If we need to take it up first, that’s fine,” Pruitt said of the capital budget. “This is not about playing games with Alaska.”

Rep. Cathy Tilton, R-Wasilla and the leading minority member on the House Finance Committee, said Thursday that it would be appropriate to say her caucus will be further refining its position in light of the governor’s proposed fix. A meeting of the minority caucus will take place Friday morning.

According to a draft of the governor’s legislation obtained by the Daily News, the governor is proposing to fix the holes in the capital budget but not restore the money drained from the Power Cost Equalization endowment.

“It takes all of the money from the PCE. That’s causing a lot of alarm. There will be changes there, I can predict,” Giessel said.

Lawmakers have not reached agreement on what should be in the legislation, Giessel said.

LeBon said that with the capital budget, reverse sweep, budget vetoes and dividend all in play, there might be a temptation for lawmakers to seek leverage for their favored topic in exchange for a vote on the capital budget.

“Everybody has a favorite piece of the puzzle, if you will," he said.

If that happens, progress could be slow, and the trouble could mount. If the capital budget is not fixed by the end of the month, more than $900 million in federal matching funds for road and airport construction could go to other states.

“The capital budget is on a clock. Get that fixed. We don’t want to lose the matching dollars,” LeBon said.