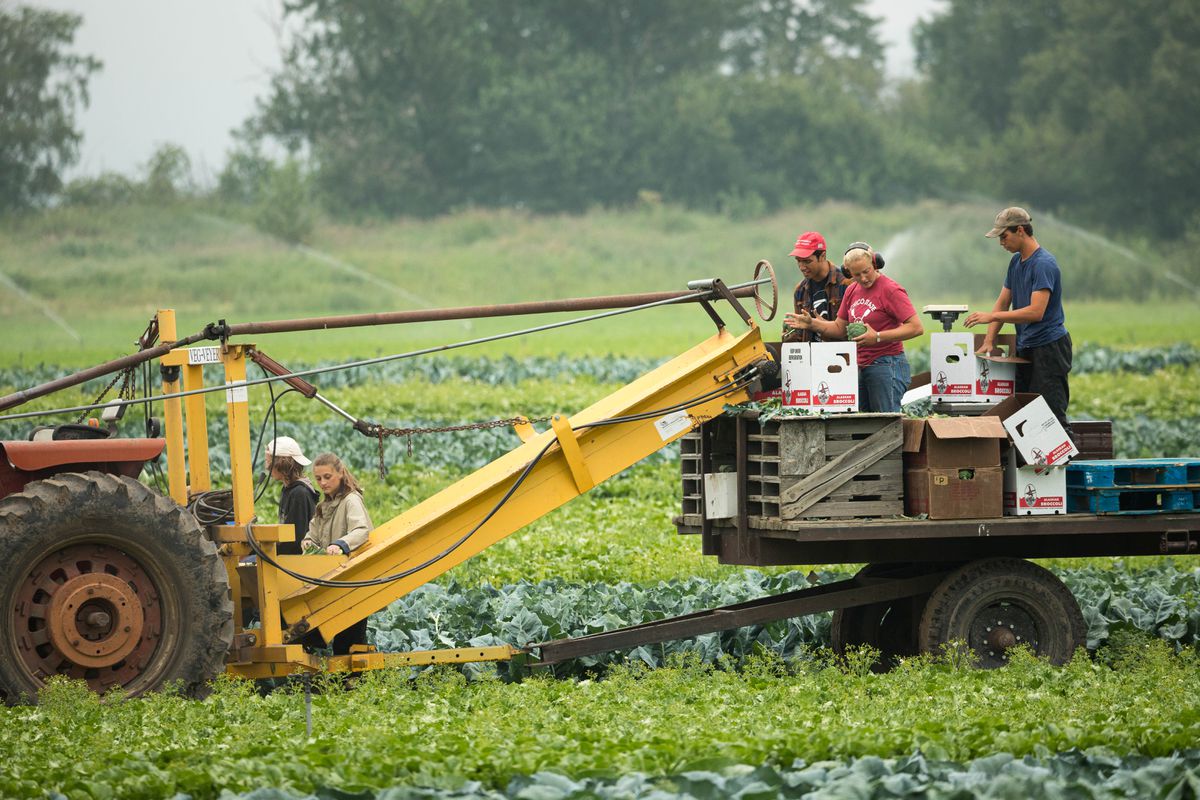 Workers pick broccoli on Thursday, July 11, 2019 at VanderWeele Farms in Palmer. The farm is one of a number that fall under grocery store audits, a program that's in limbo after Dunleavy Administration vetoes. (Loren Holmes / ADN)

Workers pick broccoli on Thursday, July 11, 2019 at VanderWeele Farms in Palmer. The farm is one of a number that fall under grocery store audits, a program that's in limbo after Dunleavy Administration vetoes. (Loren Holmes / ADN)

Vetoes to the Alaska Division of Agriculture cut marketing, inspections, the Agricultural Revolving Loan Fund, and the administration of federal audits that grocery stores require to sell locally grown produce.

Workers at the state’s Plant Materials Center in Butte destroyed a thousand hemp plants this week — all but a core sample — without enough staffers to take care of them.

The center, on 405 acres, is described as working with a skeleton crew. Alaska’s only seed-sorting facility, it’s also home to the state’s plant pathology lab, a seed laboratory, and a potato production and disease monitoring program that creates disease-free seed potatoes.

Some of the cuts target programs that aren’t funded with state unrestricted general funds but instead through federal funds the division is merely spending. The ARLF loans are one example; there were 55 active loans being administered by the state as of earlier this year.

“To be honest, I don’t really know what’s left,” said Ben VanderWeele, who runs one of the state’s larger farms near the Palmer fairgrounds.

The cuts are among $444 million in line-item vetoes announced last month by Gov. Mike Dunleavy. The Alaska Division of Agriculture was not consulted in the veto decisions, officials say. Agriculture division director Dave Schade declined to comment for this story.

It’s possible some vetoes could be reversed as the Legislature and the Dunleavy administration continue to negotiate the budget impasse. There was no sign that would happen as of Sunday.

Among the veto victims: the state’s authority to administer audits bearing the unwieldy titles of Good Agricultural Practices and Good Handling Practices and usually referred to as “gap and gip”. They’re voluntary but required by retailers to sell local produce in stores. Smaller growers selling at farmers markets or stands don’t fall under the audits.

Farmers learned this week the state stopped administering the program. Now officials are trying to find ways to pay for them.

The governor and Office of Management and Budget made the cuts to programs considered lower priority including the audits, Saddler said. “Apparently, they’re more important than some people had thought."

It’s possible there may be state funding available to cover the cost of the audits, he said. It’s also possible the U.S. Department of Agriculture could step in.

The seed-potato program was also cut after initially receiving funding, Saddler said. The state has done nine inspections but seven more need to be completed before the beginning of August.

“We’re working on finding ways to get that done," he said.

Shoppers at Southcentral Alaska Fred Meyer stores are accustomed to seeing local produce, sometimes displayed with photos of the families that grew the potatoes or carrots on the shelves.

A Fred Meyer representative said the company does require the Good Agricultural Practices certification and that won’t change.

“Buying local is important to us, and so is our customer safety and customer interest,” company spokesman Jeffery Temple said.

Matt Hale, who owns Harvest Point Farms on Point MacKenzie, hopes to start selling salad mix and various vegetables like radishes and cauliflower at stores and large distributors as his business grows. He sells now at Natural Pantry in Anchorage. That store doesn’t require the federally sanctioned review.

Hale is a week or two away from being ready for his audit, he said Saturday. But now he’s not sure the audit will happen -- and there’s no backup plan because the state’s decision was so sudden.

“Just to end it with no warning is in my opinion a little harsh,” he said.

Some farmers this week talked about the possibility of pooling money to fly up someone from the Lower 48 to do the audits. It costs more to hire someone than for the state to handle the program.

“That becomes expensive,” said Mike Mosesian, owner of Bell’s Nursery, which sells cucumbers and tomatoes in stores. “For some of these other farmers, my peers, this would become prohibitive.”

Dunleavy, who used to raise mules on his property near Wasilla, declared the state "open for business” soon after his election in November 2018 and pledged that Alaska would be a “serious player in resource development” in the country and the world.

Farm supporters say instead of developing the state’s farm businesses, the agriculture vetoes could hamstring them as they try to take off.

Alaska’s big failed farm projects are notorious: the Point MacKenzie dairy project started in the 1980s that cost millions and yielded no survivors. The state’s last commercial dairy at the Havemeister family farm between Palmer and Wasilla survived budget cuts and vetoes, though the business may have to pay $15,000 a year for inspections, operator Ty Havemeister said Friday.

Except for a few big growers, farming in Alaska today is a business of niches: peonies; unusual crops like onions; farmers markets; veggie subscription boxes. Nearly half the farmers in Alaska are beginners with 10 or fewer years of experience, according to a federal agriculture census. Alaska leads the nation in beginning farmers.

The vetoes don’t take into account that there’s no safety net here given the nascency of Alaska’s farm industry, Seitz said.