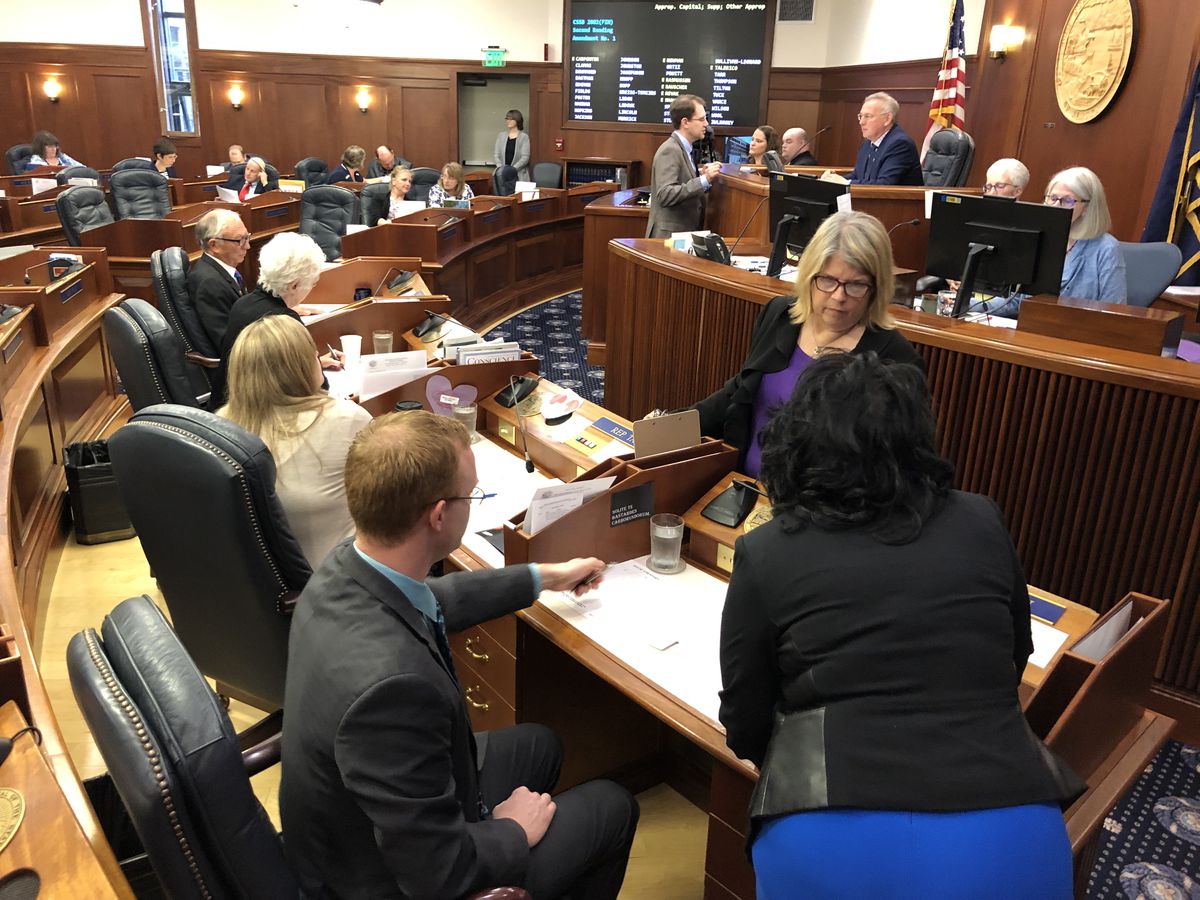 JUNEAU — The Alaska House of Representatives failed to reach a three-quarters supermajority needed to approve the “reverse sweep” and repair the state’s ailing capital budget Sunday. Senate Bill 2002 passed the House 27-6, but 30 votes were needed to pay for it, and that vote failed 25-8. The Alaska Senate approved the bill 19-0 on Saturday.

With the bill’s failure, it is unclear whether the Legislature will authorize money this year for construction projects, college scholarships, vaccines, rural electrical subsidies and dozens of other programs. More than $900 million in federal aid may be lost due to the state’s failure to provide matching funds.

15,000 jobs are at stake today. Pass the Capital Budget.#akleg pic.twitter.com/zyQnALcnyn

According to estimates from the Office of Management and Budget and Legislative Finance Division, the failure of the reverse sweep vote, a procedural action within the capital budget, will create $115 million in holes within the state’s operating budget. Those holes would come atop $444 million vetoed by Gov. Mike Dunleavy from the operating budget. There also remains no agreement on the amount of this year’s Permanent Fund dividend.

If the vetoes are sustained, this is additional $115 million that is not funded," said Rep. Jennifer Johnston, R-Anchorage and co-chair of the House Finance Committee.

“This is a very silly thing to not vote for,” she added.

[Related: What’s the ‘reverse sweep’ and why has it become an issue in Alaska’s budget deadlock?]

House Minority Leader Lance Pruitt, R-Anchorage, said he believes there is still time for the Legislature to act before those catastrophic consequences come to pass. The Alaska Legislature’s current special session does not expire until August, and a re-vote on SB 2002 has been scheduled for Monday morning. Some of the absent lawmakers are expected to arrive on a morning flight to Juneau.

“I don’t think it’s the end, and no matter what happened today and could happen tomorrow, I hope the majority feels that way as well,” Pruitt said.

“There is still a chance to pass this budget, which is absolutely essential to our citizens and our economy,” said Speaker of the House Bryce Edgmon, I-Dillingham, in a prepared statement.

In almost four hours of debate before the final vote, legislators ignored the sunny summer skies and temperate conditions outside the Capitol to lay out their reasons to vote for and against the legislation.

For most of those voting against the bill, it came down to the issue of the Permanent Fund dividend.

Speaking after the vote, Pruitt said, “I think everything loops back to the dividend.”

Most legislation in the Alaska Legislature requires 21 votes in the House and 11 votes in the Senate, plus the support of the governor, to become law. The capital budget, as currently written, is different. It requires three-quarters of the House (30 members) and three-quarters of the Senate (15 members), plus the governor, to become law.

That’s because SB 2002 is funded primarily with money from the Constitutional Budget Reserve and includes a clause called the “reverse sweep” that prevents dozens of program-specific savings accounts from being automatically drained into the budget reserve.

The coalition House majority has only 23 members and needs the support of the minority to pass SB 2002. The minority supports a $3,000 Permanent Fund dividend paid using the traditional formula in state law and has been reluctant to give up its votes unless the Legislature first agrees to pay that dividend.

“Everyone in this room knows what it’s going to take to go home. It’s been made very clear,” said Rep. Sarah Vance, R-Homer.

Conversely, Johnston worries that if the Legislature does not fund the capital budget with the reserve, lawmakers have no place to turn but the earnings reserve of the Permanent Fund.

“Not passing this budget puts the earnings reserve in jeopardy … and I fear for that. I fear desperately for that,” she said.

After the vote, Sen. Shelley Hughes, R-Palmer, was in Pruitt’s office and hugged members of the minority, thanking them for their vote. Hughes, who is in a binding Senate caucus, wanted to vote against SB 2002 on Saturday but could have lost a prized committee chairmanship if she had done so.

“I think it’s sad that the Speaker (of the House) was an obstructionist because if they had passed a full PFD, the capital budget would have been finished and we would have fulfilled the call,” Hughes said.

Members of the coalition majority unsuccessfully attempted to make the case that SB 2002 has no direct connection with the dividend and that failing to pass it will have major consequences.

The failure to fund the capital budget puts the state at risk of missing deadlines for federal transportation grants that require state contributions. The failure of the reverse sweep means no money for dozens of state programs until the problem is addressed.

“Really, we are under a very significant time crunch here,” said Rep. Geran Tarr, D-Anchorage. “Really, the uncertainty is really bad for our economy.”

Rep. Andy Josephson, D-Anchorage, suggested that the failed vote may lead to legal action from Alaskans affected by the lost funding.

“This bill has been nothing but compromise,” said Rep. Gary Knopp, R-Kenai. “You can’t say that because you didn’t get one of your issues in this bill — where it doesn’t fit — that it’s not compromise.”

The minority offered a handful of amendments that would have negated some of the immediate consequences of the failed reverse sweep, but none were accepted.

Before the final vote, Rep. Gabrielle LeDoux, R-Anchorage, suggested a solution that could have satisfied both the majority and minority. LeDoux, an independent Republican who is not a member of either caucus, suggested amending the bill to include a $3,000 dividend only if the reverse sweep, capital budget funding, and enough money to reverse all of the money vetoed by Dunleavy from the operating budget are also signed into law.

The University of Alaska has scheduled an emergency board of Regents meeting for Monday as it attempts to deal with $130 million vetoed from its budget by Dunleavy.

Members of the minority gave LeDoux’s idea a mixed response, but it was opposition from the majority that killed the concept. Several members pointed out that to spend so much money would require overspending from the Alaska Permanent Fund.

“It literally spends our way out of the problem. It spends down the Permanent Fund,” said Rep. Jonathan Kreiss-Tomkins, D-Sitka. “That’s just unacceptable. That is unacceptable to me ... I will not spend our way out of short-term problems by balancing it on the backs of future generations of Alaskans.”

LeDoux withdrew her proposal, and the unamended bill went on to fail.

“I feel optimistic that some of the members will change their vote overnight,” said Rep. Chuck Kopp, R-Anchorage.

He added that a changed vote likely requires lawmakers to hear from their constituents.

Sunday’s vote dealt with two of the four major fiscal problems facing the Alaska Legislature. Each of those problems affects different programs, and in different ways. The failure of the capital budget means:

• There is no money to implement the state’s major new anti-criminal legislation, House Bill 49.

• There is no money to unlock nearly $600 million in federal highway and airport construction aid.

• The Alaska Marine Highway will not receive $13.5 million needed to certify and overhaul ferries annually.

• The state’s tourism marketing program will lose more than $7 million.

The failure of the reverse sweep vote means:

• An estimated $115 million has been removed from the state’s operating budget, atop the $444 million vetoed by the governor.

• No money for the Alaska Performance Scholarship, Alaska Education Grant or WWAMI medical school program because the Higher Education Investment Fund has been drained.

• The state’s anti-smoking campaigns and alcohol and drug abuse-treatment programs may go unfunded.

• The Alaska Comprehensive Health Insurance Fund, which lowers the cost of Medicaid, may go unfunded.

• Professional license fees paid by barbers, hairdressers, architects, engineers and other state-regulated professions will fluctuate significantly each year based on the number of applicants and work performed that year.

Both of these lists are incomplete.