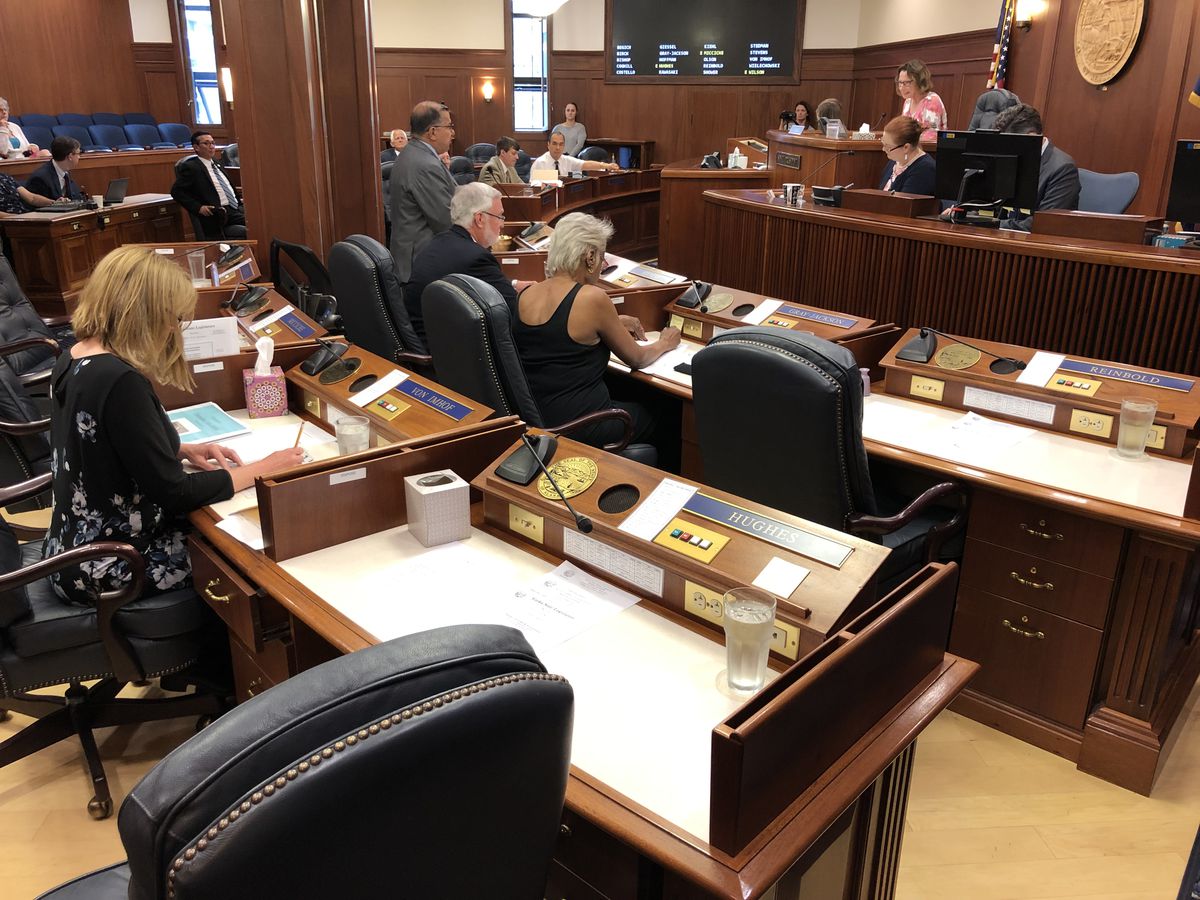 On Thursday, friends and family mourned the sudden death of Anchorage Republican Sen. Chris Birch. In the next 30 days, Alaskans statewide will watch as Gov. Mike Dunleavy selects a replacement for one of the Senate’s most vocal advocates for balancing the state budget through cuts to the Permanent Fund dividend.

With the Alaska Senate divided 11-9 on the amount of this year’s dividend, the governor’s selection has the potential to tip the balance on a topic that affects every Alaskan. Birch repeatedly voted in favor of a $1,600 Permanent Fund dividend and sometimes advocated still-smaller amounts, hoping those would eliminate the need for tax increases. Dunleavy has supported a $3,000 dividend and has proposed additional payments that would push the amount higher.

Rep. Jennifer Johnston, R-Anchorage, was Birch’s friend for 30 years. They served on the Anchorage Assembly together and in the Alaska House of Representatives.

“He did believe in a balanced budget. He didn’t feel that we should tax people in order to get a big dividend,” she said.

Rep. Chuck Kopp, R-Anchorage, said the dividend was one of Birch’s signature issues.

“He was very courageous, and he was not afraid to stand up to anyone or any party position if he felt they were incorrect,” Kopp said.

At present levels of spending, the state does not have enough revenue to pay for both budgeted services and a dividend paid using the traditional formula in state law. This year, that dividend would be $3,000.

Some lawmakers have supported additional cuts to services — as has Dunleavy. Others have supported cuts to the dividend. To avoid further cuts to either, lawmakers have begun seriously considering adjusting the state’s taxes on oil and gas production. In interviews, speeches and an opinion column published in the Daily News, Birch spoke against that option and against cuts to services, favoring dividend reductions instead.

“But to me it doesn’t make sense to torpedo the oil and gas industry with a massive tax increase or to tax Alaskans heavily with one hand just to send out a big dividend with the other,” he wrote in May.

[VIDEO ABOVE: The late Sen. Chris Birch speaks on the state budget in July.]

As chairman of the Senate Resources Committee, Birch held a powerful position capable of blocking any changes to oil and gas taxes unless a sufficient number of legislators overruled him.

Now, a new legislator, possibly with different positions, may take the seat. The process of picking that replacement is set out by state law and the rules of the Alaska Republican Party. Under state law, because Birch was a Republican, the seat must be filled by a Republican. The replacement must meet the normal criteria for serving in the Senate: He or she must be at least 25, a registered Alaska voter for at least three years, and a resident of Birch’s Senate district for at least one year.

State law also specifies that the governor has 30 days to appoint someone to the vacancy, and that the governor’s choice is subject to confirmation by a majority vote of the other Republicans in the Senate. If those senators approve, the new senator would be sworn into office the next time the Legislature convenes in special session or regular session.

Under traditional custom, the state’s political parties help the governor select a replacement by providing a list of candidates. Earlier this year, the Alaska Republican Party finished codifying internal rules for that tradition.

Within those rules, the party leaders of House District 25 and House District 26 (Abbott and Huffman) will solicit applications for the vacancy. Within two weeks, the officers of the districts’ Republican establishment will hold a special meeting and vote on three finalists to send to the governor.

“We will have to do something within 14 days, but our position right now is to allow Pam and the family to grieve and do our remembering and celebration of Chris’s life first,” said Glenn Clary, the chairman of the Alaska Republican Party, by phone on Thursday.

Akis Gialopsos is chairman of the House District 25 Republican Party and chief of staff to Senate President Cathy Giessel, R-Anchorage.

He said Thursday that the rules are intended to allow a “respectful period of time” before beginning the replacement process.

Mike Robbins, chairman of the House District 26 Republican Party, said by phone that “it’s a time to show respect for the family and go through the process, and we’ll worry about the politics later.”

Both men said they are uninterested in applying for the seat themselves. Robbins laughed when asked about his interest and said he isn’t aware of any likely candidates.

When asked whether he had any interest in applying, Rep. Josh Revak, R-Anchorage, said, “I think there needs to be a time of mourning, and I haven’t even gotten that far.”

The woman he defeated in last year’s Republican primary for House District 25, longtime state Rep. Charisse Millett, said she is not interested. She now works as executive director of the Public Safety Employees Association, a law-enforcement officers’ union.

Rep. Laddie Shaw, R-Anchorage, said he would be honored to apply. He said he feels the best way he can honor the memory of Birch is to continue the work he began.

“It would absolutely be my way to honor him,” Shaw said.

Regardless of the governor’s choice to fill the vacancy, that person would have to stand for election next year. Birch was elected to office last year, and state law prescribes that anyone appointed to a Senate seat with more than two years and five months remaining in the term must be confirmed in a special election held at the next general election, if they want to continue serving.

Birch is the first senator to die in office since Bettye Fahrenkamp in 1991. Fahrenkamp, who battled bone cancer for years before her death, wrote in a final note to then-Gov. Wally Hickel that retired teacher Shirley Craft should replace her. Neither Hickel nor Fairbanks Democrats disputed that request.

“Bettye Fahrenkamp was a good senator for Fairbanks," Hickel said in a press release at the time. “If she believed Shirley Craft is right for the job, I’m not going to second-guess her.”