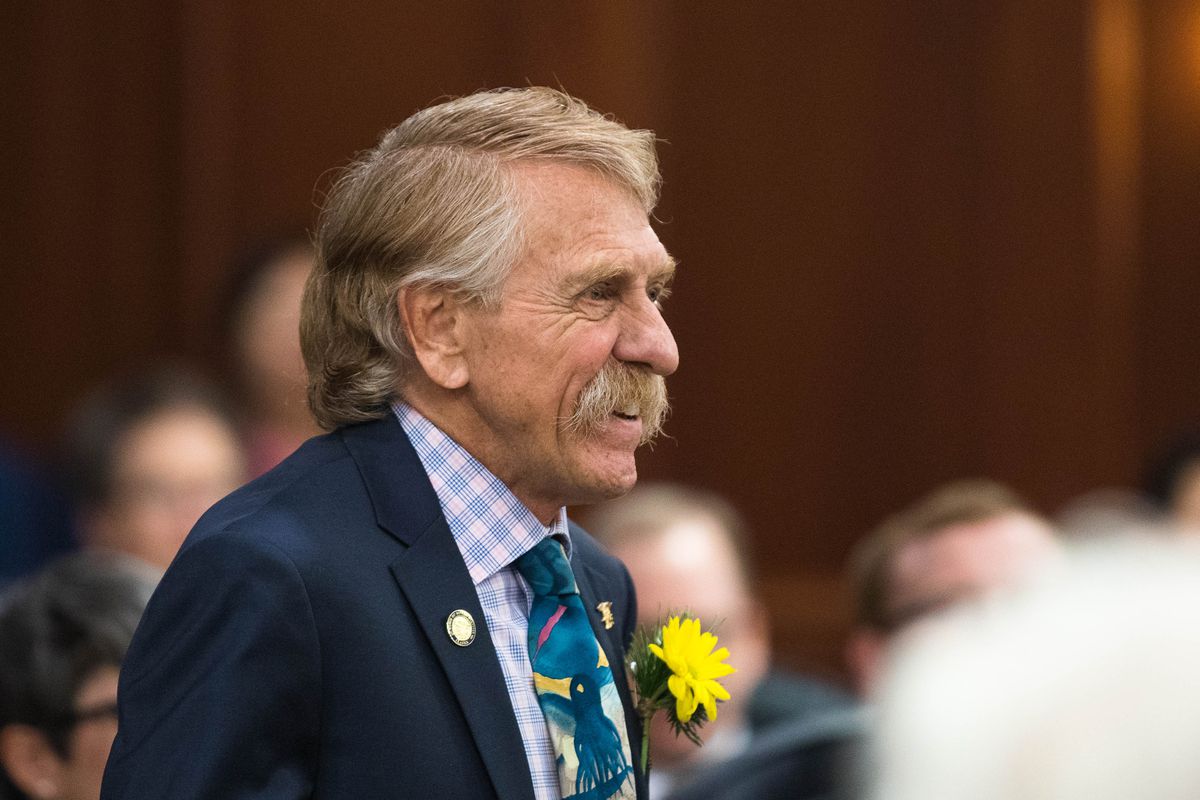 Rep. Laddie Shaw, R-Anchorage, on the first day of the legislative session on Tuesday, Jan. 15, 2019 at the Alaska State Capitol in Juneau. (Loren Holmes / ADN)

Rep. Laddie Shaw, R-Anchorage, on the first day of the legislative session on Tuesday, Jan. 15, 2019 at the Alaska State Capitol in Juneau. (Loren Holmes / ADN)

Gov. Mike Dunleavy on Friday picked state Rep. Laddie Shaw, R-Anchorage, for an Alaska Senate seat vacated by the death of Sen. Chris Birch, R-Anchorage. The governor’s choice is subject to confirmation by the Senate’s other Republicans, and if Shaw is accepted, his departure from the House would allow the governor to select Shaw’s replacement.

The governor announced his decision in a video broadcast on Facebook. Shaw was among three people nominated to fill the vacancy by Anchorage Republicans. The other two nominees were Anchorage School Board member and former state lawmaker Dave Donley and Al Fogle, who lost a 2018 Republican primary to Shaw. The governor was not required to pick from that list but said he did so because he was satisfied with the vetting process.

“Laddie and I had a conversation about his view of government, his view of public service, and I think it’s going to be a very good fit for Senate District M,” the governor said, announcing the decision.

If confirmed, Shaw will fill the seat that became vacant when Birch died of a torn aorta Aug. 7. The seat will be subject to a special election in 2020, and Shaw said he will be a candidate in that election.

Shaw said by phone that the governor told him he’d been picked Friday morning, after both appeared at a Korean War memorial ceremony on the Delaney Park Strip.

“It is a big step for a freshman legislator ... my legs aren’t that long to take that big a step, but I can jump,” Shaw said, alluding to his paragliding hobby and his short stature.

“I’m extremely humbled by the outpouring of support.” He said he wants south Anchorage residents to know “I’m going to continue to do my best to represent my community.”

Shaw’s nomination is subject to the approval of his fellow Senate Republicans. If they agree with the governor’s selection, Shaw would begin serving when the Legislature next convenes. (Dunleavy has said he will call a special session this fall.)

“We’ll see how this process works out, but I’m pretty optimistic,” the governor said about the chances of confirmation.

Senate President Cathy Giessel, R-Anchorage, said her next step is to begin coordinating with other senators to set a date and time for them to meet, preferably in person. They will invite Shaw for an in-person interview, then vote afterward. The vote will not be public. Giessel said she does not know when it will take place, but it will be before any special session called by the governor.

She declined to say how she expects to vote on confirmation.

Before his death, Birch was a key advocate for balancing the state budget by reducing the Permanent Fund dividend rather than raising taxes or cutting services. In its final vote this year, the Senate voted 11-9 in favor of a $1,600 dividend, with Birch in the majority and the Senate’s Republicans deeply split.

Shaw, as a member of the House minority, repeatedly voted in favor of a $3,000 dividend.

“That may be a difference. I don’t know if that’s one of the biggest differences,” Shaw said when asked whether his position on the dividend is the largest difference between himself and Birch.

Giessel said she doesn’t know how much the dividend argument will play into Shaw’s confirmation.

According to his official biography, Shaw, 70, was born in Landshut, Germany and went to high school in Flint, Michigan. He fought in the Vietnam War, serving as a U.S. Navy SEAL. He followed that with stints in the Naval Reserve and Alaska Army National Guard. He has has lived in Alaska since 1981, including stays in Sitka, Anchorage and Juneau.

He became an instructor at Alaska’s police academy in Sitka in 1988, director of the Alaska Police Standards Council in 1993, and was Alaska’s director of veterans affairs from 1999 to 2003. He unsuccessfully ran for House in 2004.

Asked whether he has a preferred candidate for his replacement, Shaw said, “I would like someone to replace me who has the same conservative values."