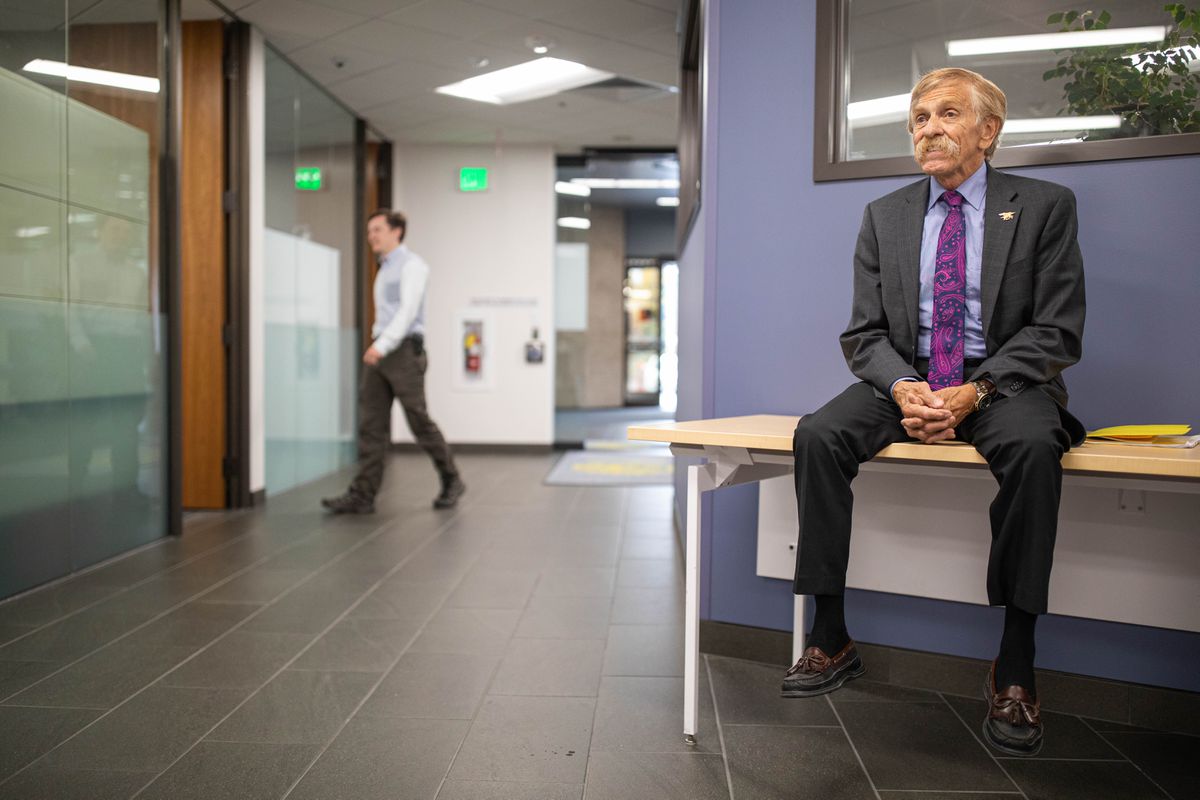 Rep. Laddie Shaw, R-Anchorage, waits outside a meeting of Senate Republicans Thursday, Sept. 19, 2019 at the Anchorage Legislative Information Office. The group of 12 republicans failed to confirm Shaw to the Senate seat vacated by the death of Sen. Chris Birch, R-Anchorage. (Loren Holmes / ADN)

Rep. Laddie Shaw, R-Anchorage, waits outside a meeting of Senate Republicans Thursday, Sept. 19, 2019 at the Anchorage Legislative Information Office. The group of 12 republicans failed to confirm Shaw to the Senate seat vacated by the death of Sen. Chris Birch, R-Anchorage. (Loren Holmes / ADN)

The rejection, unprecedented in state history, was a proxy for the Senate’s deep divide over the Permanent Fund dividend. Shaw was one vote short of confirmation: Seven of the Senate’s 12 remaining Republicans were needed to confirm him; the vote was 6-6.

Never before have Republican senators rejected the pick of a Republican governor who chose from nominees vetted by local Republican officials. The Alaska House’s Republican minority issued a written statement saying the vote represented a “lapse in judgment” by Senate Republicans.

Senate President Cathy Giessel, R-Anchorage, said in a written statement after the vote that it “in no way reflects on the exceptional qualifications of Representative Shaw.”

Instead, the vote reflects the ongoing dispute over the Permanent Fund dividend and whether the state should continue to follow its traditional distribution formula. Birch was among the loudest voices in favor of a smaller dividend in order to avoid tax increases or cuts to services. As a member of the House, Shaw voted in favor of a traditional dividend as a member of the House Republican Minority.

“The duty of the Senate is to confirm a replacement to District M with deference to the views of the late Senator Birch and, most importantly, those of all the people in the district he served,” Giessel said in the statement.

[Your support makes reporting on Alaska politics possible. Buy a digital subscription to adn.com and never miss a story]

Sen. Shelley Hughes, R-Palmer, said by phone that the result was “very disappointing" and that she completely disagrees with Giessel’s statement, which was released bearing the name of the Senate Republicans.

The vote was not public; it took place in a closed-door meeting Thursday afternoon at the Anchorage Legislative Information Office. The Senate’s 12 sitting Republicans interviewed Shaw for about 50 minutes, then voted upon his confirmation.

Some senators described the procedure used in the room: After debate, senators went up to a table holding an orange camping bag and white slips of paper printed both with “yes” and “no.” Senators were asked to circle a choice, then drop it in the bag. Sens. John Coghill, R-North Pole, and Peter Micciche, R-Soldotna, tallied the result.

“I think everyone had an opportunity to say something that they wanted to say,” said Sen. David Wilson, R-Wasilla, but he believes that did not change the result.

“People knew the votes before it was going to happen,” he said.

After the vote, the senators walked past a waiting Shaw, none offering a word or a sign of how they voted, he said.

“It was almost like they were embarrassed by their decision,” he said.

That confirmation is normally a procedural matter because governors customarily select a replacement legislator from a list of nominees provided by local party officials. In this case, Anchorage Republicans nominated Shaw, Al Fogle and former state Sen. Dave Donley. The governor interviewed all three and selected Shaw.

Rejections have always come in cases where governors went outside the list provided by party officials. In 1987, then-Gov. Steve Cowper had a pick rejected. In 2009, then-Gov. Sarah Palin’s first two nominees for a vacant Juneau Senate seat were rejected. Nine years later, then-Gov. Bill Walker had his first choice for a vacant Wasilla seat rejected for that reason, and a second withdrew before a confirmation vote.

“Tradition has been to be respectful to the governor and the district and honor their choice for the area,” said Sen. Lora Reinbold, R-Eagle River.

Several senators said the Republicans assembled Thursday were instructed to not speak to the media about how they had voted, and most followed that instruction.

Wilson said before the vote that senators “should make the selection of the individual off their qualifications and not on any related policy issues,” and followed that by voting for Shaw, he said. Hughes had released a video Thursday morning expressing her intent to vote for Shaw.

With the Senate’s failure to confirm Shaw, the governor has 10 days to appoint another candidate for Senate Republicans to consider. Hughes said she worries what will happen if the Senate fails to confirm that pick as well.

“This could happen over and over,” she said. “It would be a nightmare if it went on like that.”

Shaw, meanwhile, will stay in the House and continue to be a member of the House Republican minority. He worries, however, that Thursday’s vote is a sign of more trouble to come.

“It seems like the Republican Party is fracturing itself,” Shaw said.