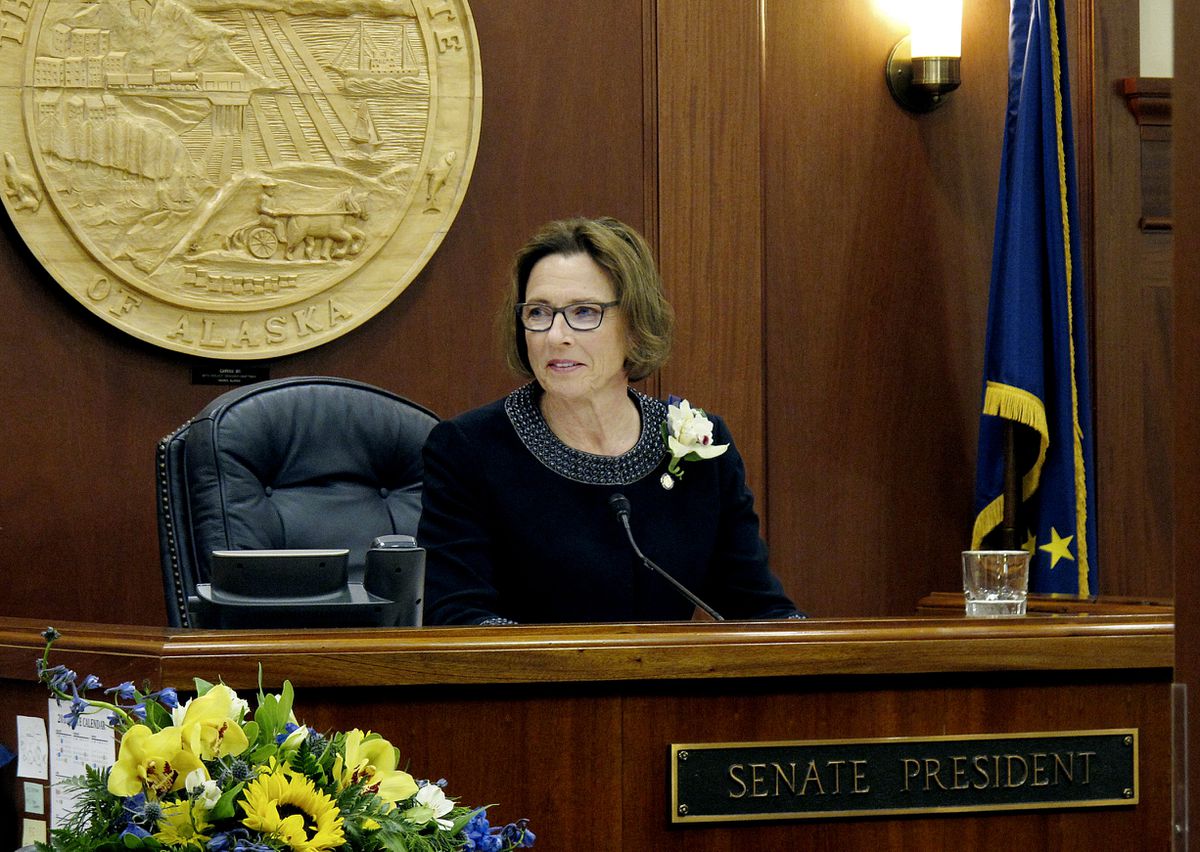 FILE - In this Jan. 15, 2019, file photo, Anchorage Republican state Sen. Cathy Giessel is shown after being elected Alaska Senate president in Juneau, Alaska. During her first year as Alaska Senate president, Giessel won over one-time political adversaries and angered some within her own party for her willingness to buck Gov. Mike Dunleavy, a fellow Republican, on key pieces of his agenda. (AP Photo/Becky Bohrer, File)

FILE - In this Jan. 15, 2019, file photo, Anchorage Republican state Sen. Cathy Giessel is shown after being elected Alaska Senate president in Juneau, Alaska. During her first year as Alaska Senate president, Giessel won over one-time political adversaries and angered some within her own party for her willingness to buck Gov. Mike Dunleavy, a fellow Republican, on key pieces of his agenda. (AP Photo/Becky Bohrer, File)

JUNEAU — During her first year as Alaska Senate president, Cathy Giessel won over one-time political adversaries and angered some within her own party for her willingness to buck Gov. Mike Dunleavy, a fellow Republican, on key pieces of his agenda.

Giessel's ascension to the role just three other women have held coincided with Dunleavy's 2018 election. She was among those who argued cuts proposed by the governor were too much, too fast, and that the formula he wanted to follow for paying checks to residents from the state's oil-wealth fund, the Alaska Permanent Fund, was no longer workable.

"That's one issue, and the other is, to be so publicly, adamantly at odds with the governor is just bizarre," he said, noting he would not support her again.

Rather than dictating views to her 14-member caucus, which includes a Democrat, Giessel said she gives them room to wrestle with issues to reach agreement, or not. Her caucus was sharply divided on the dividend last year, which she said reflected the electorate and divisions within her party.

Giessel said the dividend has been one of the most divisive statewide issues she's seen. It's expected to be a major focus during the next legislative session, which begins Jan. 21.

"But I do believe ... we will, after all of this vigorous conversation, come to a good conclusion," she said.

In 2016, as she faced re-election, Giessel supported then-Sen. Dunleavy's call to restore the portion of the dividend cut by Gov. Bill Walker as the state struggled with a budget deficit. Giessel recently said she felt the issue should not be decided by one person.

Lawmakers had a chance to override Walker's actions but didn't. A legal challenge ultimately was decided in his favor.

Dunleavy has supported using a decades-old dividend formula that many lawmakers see as unsustainable and haven't followed in recent years. Giessel has called for a formula change.

During her race, "I never said I supported these massive-sized PFDs," she said, referring to the checks. "I supported a full legislative discussion of the subject and not just keeping the money in the earnings reserve account but actually using it to balance our budgets."

Lawmakers settled on a 2019 dividend that equaled $1,606. Under the formula, it would have been $2,910, according to the Department of Revenue.

House Speaker Bryce Edgmon said his relationship with Giessel mainly consisted of passing hellos before she became Senate president but has blossomed into a friendship and trusted working relationship. He said she has come into her own as a leader.

"She sticks to her values, her principles. In the face of flack by some in her own party, and maybe some Alaskans along the way, she didn't flinch, and I really respected her for that," said Edgmon, an independent.

Giessel and Edgmon joined in challenging the administration in a dispute over school funding and Dunleavy's pick of a special session location.

Giessel was born in territorial Alaska, in Fairbanks, where she was raised, the oldest of four children. Her father was a pilot who often took her on trips to rural Alaska. Her mother went to law school after raising the family.

Giessel wanted to study political science in college but said her mother urged her to study something "practical," like nursing. Her mother also urged her to intern for then-U.S. Sen. Ted Stevens, which she said she did.

Giessel met her husband Richard in Michigan, where she attended college. After nursing school, when he suggested they marry, she told him he'd find her in Alaska, where they eventually settled.

She put her nursing career on hold for 12 years to raise and homeschool their children, and later earned a master's degree.

Giessel has long been involved in Republican politics and served as a state GOP vice chair.

After working on campaigns and wanting to make a difference with policy, she was elected to the Senate in 2010. For two years, she was part of a conservative, four-member minority.

Oil and gas were hot topics, and she "made up her mind that she was going to know everything that there was to know about it," said Republican Sen. John Coghill, who was in that caucus and is on the current GOP-led majority's leadership team.

"Man, oh man. She got hold of something and became a formidable force because of her tenaciousness," he said.

During her legislative career, Giessel has often attended hearings of committees she doesn't serve on, taking notes, likening it to soaking up all she can in a classroom.

Giessel became Senate Resources Committee chair in 2013, after Republicans wrested control of the Senate from a bipartisan majority. She said she wanted the job after seeing how North Slope communities she visited as a nurse had benefited from oil development.

Senate Democratic Leader Tom Begich said Giessel once was a political adversary but last year said they expressed a desire to work together, in their leadership roles. The Anchorage Democrat said he and Giessel have different ideas but share the goal of a "stable, sustainable Alaska" with opportunities.

“I have no doubt about that, and that makes it easy to work with her,” he said.