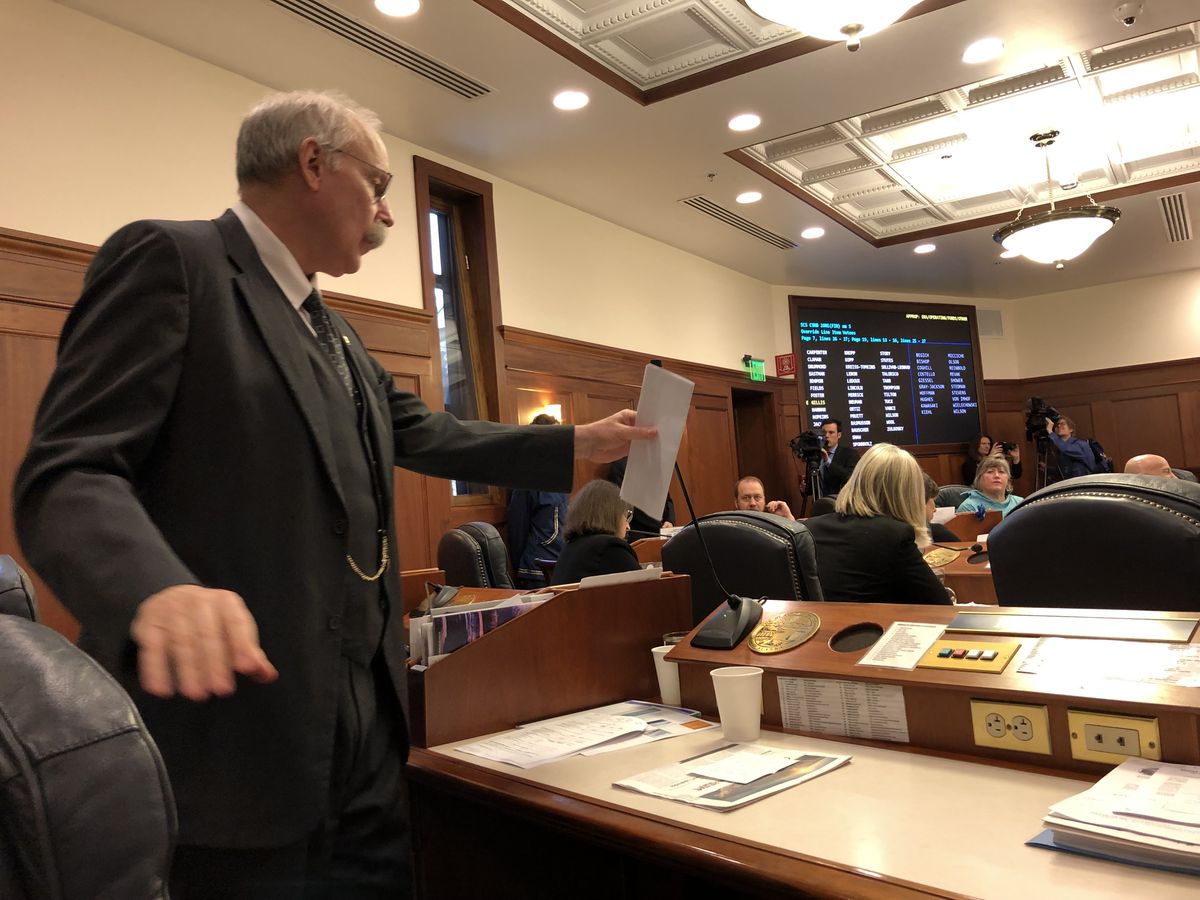 Sen. Bert Stedman, R-Sitka, prepared to speak in favor of veto overrides during a joint session of the Alaska Legislature on Friday. (James Brooks / ADN)

Sen. Bert Stedman, R-Sitka, prepared to speak in favor of veto overrides during a joint session of the Alaska Legislature on Friday. (James Brooks / ADN)

JUNEAU — Legislators failed to override his budget vetoes, but now Gov. Mike Dunleavy is preparing to revise Alaska’s budget himself, boosting state spending well beyond what was approved last year.

Lawmakers and the governor collectively cut $351 million in tax-funded and investment-funded spending from the state’s operating budget following an extended series of special sessions, vetoes and follow-up legislation.

The Legislature and governor always make second-year revisions to state spending in a document known as the supplemental budget, but when Dunleavy unveils his suggestions next week, lawmakers are expecting something unlike anything they’ve seen before.

“This year, unfortunately, we’re going to have a colossal supplemental on the table next week, into the hundreds of millions,” said Senate Finance Committee co-chairman Bert Stedman, a Republican from Sitka.

The governor’s proposal must receive legislative approval before becoming law.

Last summer’s wildfires and higher-than-planned health care spending will account for most of the additions.

“You will see increases because of those reasons,” the governor said Thursday.

Last year, the Legislature and governor cut $160 million from the state’s Medicaid budget with the expectation that the state could reduce services or find cheaper ways to provide care. It hasn’t worked out that way, the governor said.

Under Medicaid, any enrolled American is entitled to care, even if the state hasn’t budgeted for it. The federal government picks up about 65% of the cost in Alaska.

Stedman says he doesn’t think the missed goal in health care funding was anything other than ”a legitimate attempt by the administration to reduce the budget.”

He did say, however, that he would have tough questions for Donna Arduin, the state’s former budget director, if she were still employed by the state.

“(The cuts) created a substantial amount of turmoil around the state that doesn’t need to take place, in my opinion,” he said.

Supplemental budget spending won’t be limited to health care and wildfires. The administration has said it plans to add $12 million in ferry funding, and the governor said Thursday that other items will be included, too.

“There’s a number of smaller ones, smaller adds, focusing around (the Department of Public Safety),” he said.

Collectively, those additions are expected to mean $250 million to $300 million more spending than was planned for last year.

That figure could rise. Last week, 37 lawmakers in the House and Senate voted unsuccessfully in favor of $69 million in funding for public school debt payments vetoed by the governor, and some legislators have said they are interested in adding that money to the supplemental budget.

The Alaska Supreme Court is considering the legality of a plan that would allow the state to borrow up to $1 billion to pay tax credits owed to oil and gas drillers. If the court rules the plan illegal, the state would need to add as much as $115 million to the supplemental budget.

All of that spending prompts a question: How will the state pay for it?

Last year, lawmakers approved spending up to $250 million from the state’s Constitutional Budget Reserve on as-yet-unforeseen expenses. The supplemental budget is now expected to exceed that total.

“This isn’t the end of the world. It just means there’s the potential need of another three-quarter vote,” said Rob Carpenter, an analyst with the Legislative Finance Division.

The 40-member Alaska House of Representatives is split into three voting blocs, 23-16-1, which means the multipartisan majority has enough votes to pass legislation on its own, but not enough to use the Constitutional Budget Reserve without the help of the minority.

The Alaska Senate is split 14-6 between a predominantly Republican majority and a Democratic minority, but it has not had problems reaching a three-quarters vote on a variety of issues.

Last year, the House minority unsuccessfully attempted to use its political leverage on the budget reserve vote to advance a $3,000 Permanent Fund dividend payment using the traditional formula in state law.

The majority refused to budge, and the deadlock starved college scholarships and the state’s rural power subsidy program of funding. The issue was resolved when some members of the minority agreed to provide the votes that were needed.

“We are aware that they’re coming with something that’s pretty large,” he said.

He declined to state what the caucus might request in exchange for its budget vote, saying that at this point, they would like House leaders to consult them during the budget process.

“If you’re just cut out, then why would you be inclined to support something?” he said.