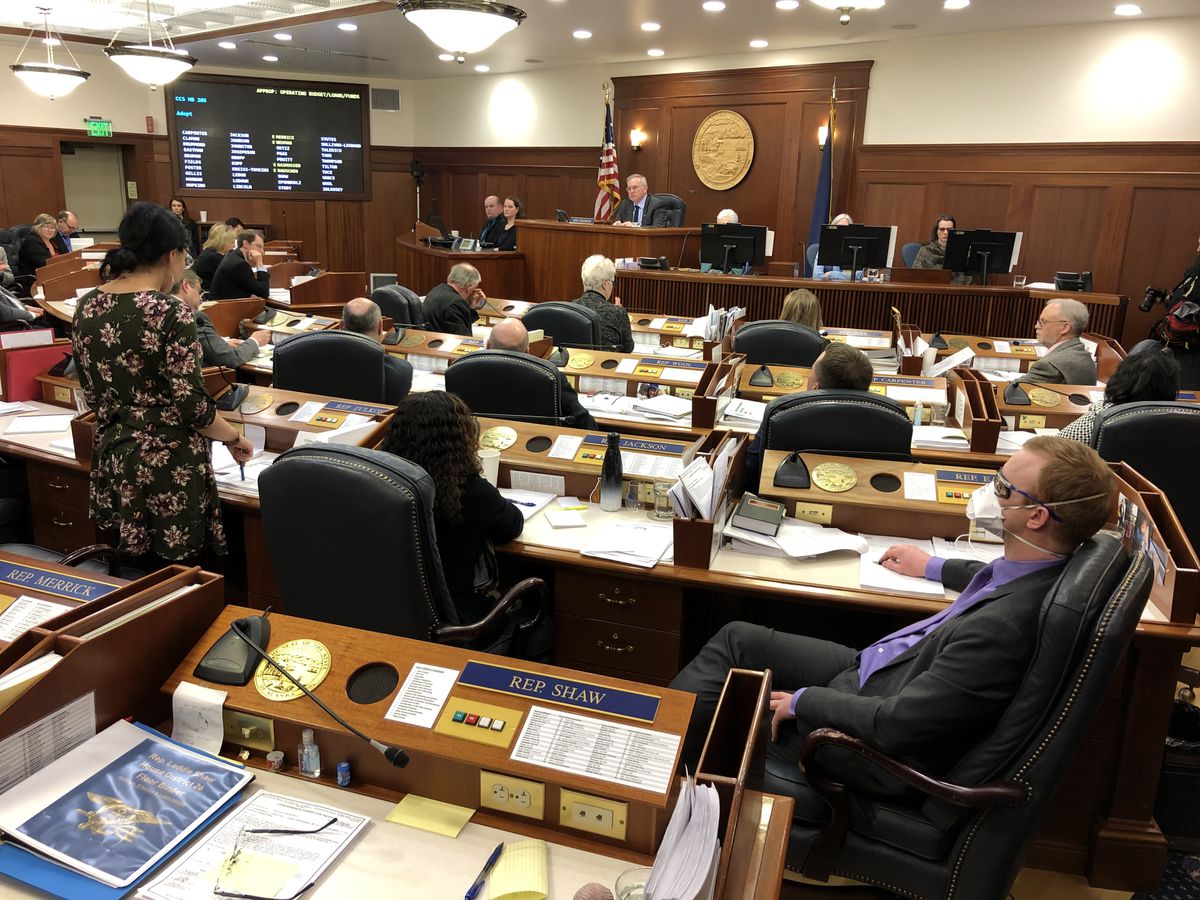 JUNEAU — The Alaska Legislature has finished its work in Juneau, at least for now.

Spurred by the coronavirus pandemic, state lawmakers worked into the early hours of Sunday before approving $4.5 billion in operating and capital spending, plus $680 million for the 2020 Permanent Fund dividend, enough for $1,000 per person. A planned $1,000 spring supplemental dividend was not funded.

The budget bill will go to the desk of Gov. Mike Dunleavy, who has the power to veto individual items.

The final vote in the Alaska House of Representatives, cast about 1:30 a.m., ended weeks of resistance by the Alaska House minority and independent Republicans who had sought a larger Permanent Fund dividend and further reductions in spending.

Thirty votes in the House were needed to fully fund the budget from the state’s Constitutional Budget Reserve. Up to the final moment, it wasn’t clear whether enough minority Republicans would side with the majority coalition that includes Democrats, independents and Republicans.

The decision hung in the balance for a few seconds as lawmakers cast their votes.

Twenty-nine lawmakers had voted in favor and six had voted against. The last legislator waited.

Sullivan-Leonard pressed “yes,” and the Alaska House of Representatives was assured of a fully funded budget.

The vote in the Senate was not close. Only Sen. Mike Shower, R-Wasilla, voted against spending from the budget reserve.

“It is a compromise, but it provides some choice, some certainty for our state when much is uncertain,” said Rep. Andi Story, D-Juneau, speaking about the budget overall.

Sunday’s action covers the fiscal year that starts July 1. Pressed by the coronavirus pandemic, lawmakers finished their work in a record 68 legislative days, though many said the a special session will be needed later this year.

The budget reserves $88 million in state money to address the pandemic and allows state officials to accept federal aid.

Spending on services is up slightly from the previous year, but direct comparisons are difficult because of the pandemic.

The governor did not fund public radio and television, but the Legislature’s budget does. Lawmakers also attempted to cut off funding for the Dunleavy-supported lawsuit against the state’s public-sector unions over the matter of union dues.

The budget expects $4.3 billion in tax and investment revenue and calls for spending $1.1 billion from the Constitutional Budget Reserve to balance the books.

Members of the minority sought to leverage their votes on the budget reserve to gain support for the $3,200 dividend proposed by Dunleavy, a $1,300 supplemental dividend also proposed by the governor, or lower spending on state services.

None of those ideas had the support of the majority, because each would have required the state to violate limits on sustainable spending from the Alaska Permanent Fund. The Alaska Senate was also uninterested for the same reason.

Earlier this month, in an attempt to force the minority into line, senators linked a budget reserve vote to the state’s supplemental budget, a document that contained funding needed to address the coronavirus pandemic, pay for last summer’s wildfires and cover Medicaid expenses.

The House minority and independent Republicans voted against the bill anyway, leaving it only two-thirds funded. A revote failed by an even wider margin.

After that experience, Senate Finance Committee co-chairman Bert Stedman, R-Sitka, rewrote the state operating budget, meshing different versions passed by the House and Senate to come up with a compromise.

In the rewrite, he and other budget negotiators — including some from the House majority — linked the CBR vote to the Permanent Fund dividend, more than $80 million in pandemic-response spending and every other aspect of the state budget.

That maximized the pressure on the House minority. A “no” vote would cut the dividend to $500, leave coronavirus response unfunded and cover the state budget for only eight months.

“I feel like I’ve been bullied and I’ve been coerced to give my vote,” said Rep. Sarah Vance, R-Homer.

“Alaskans are not dogs to be begging for crumbs from the banquet when they own the table,” she said.

Rep. Matt Claman, D-Anchorage, said the coalition majority did compromise: Many of its members thought the best course was to have no dividend.

“When I see a thousand-dollar dividend in the fall, to me, that is a significant compromise given the significant challenges we have as a state,” he said.

Following the budget decision, lawmakers did not formally adjourn the legislative session. Instead, they simply left Juneau in what Senate Minority Leader Tom Begich called a “soft recess.”

Until the legislative session formally expires in mid-May, lawmakers could return to Juneau for additional work. Beyond that, they would need to call a special session of the Legislature.

Adjourning the budget conference committee on Saturday, Stedman said he expects to return in “late fall or early January,” if only to authorize more money for coronavirus response.