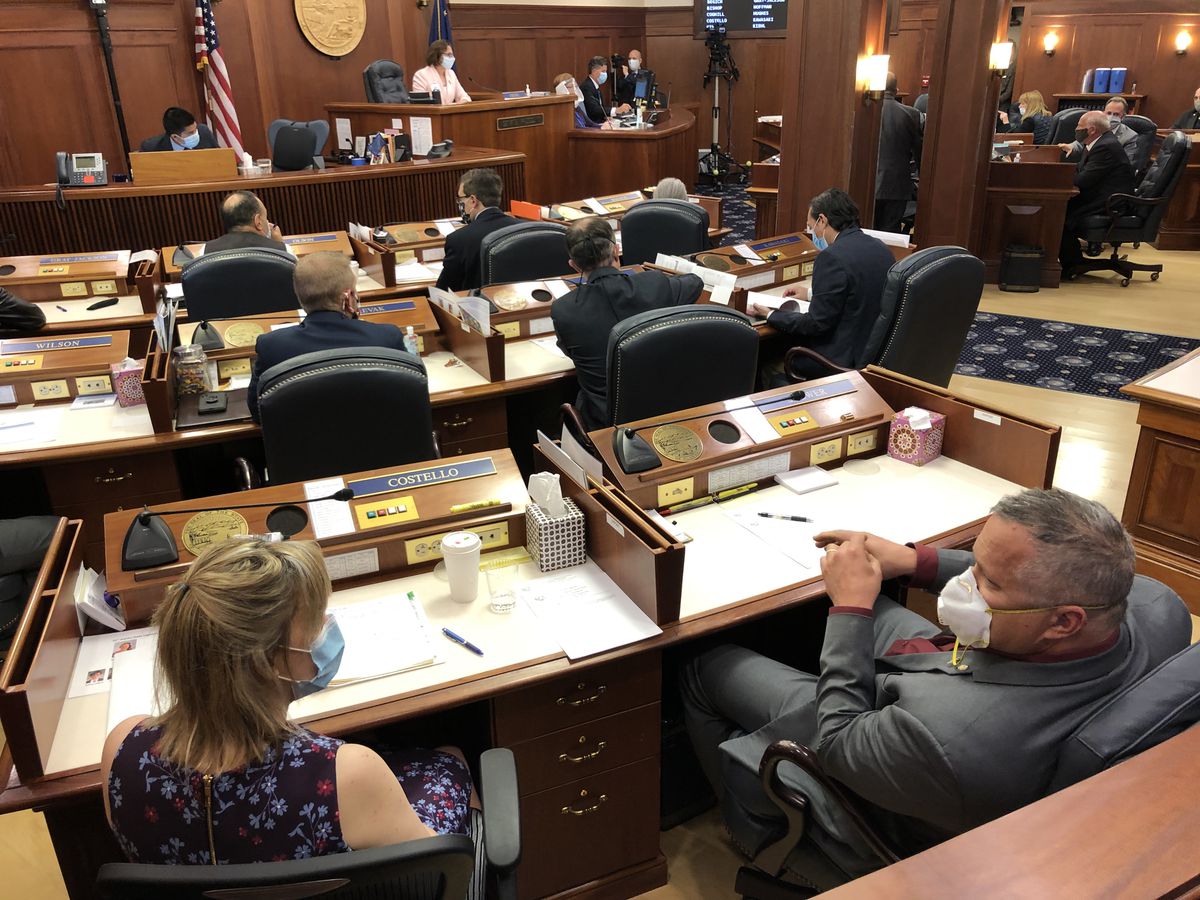 Lawmakers hurried this week to nullify a lawsuit that could have delayed federal aid for small businesses, municipalities and fisheries.

Attorney Joe Geldhof, who filed the suit, said the case will continue despite the legislative action, but his plaintiff will not seek to delay aid payments. He said he believes the lawsuit succeeded in its primary goal: It convinced the Legislature to reconvene.

Moving with lightning speed — at least in legislative terms — the House voted 38-1 barely 18 hours after ending a 49-day break caused by the ongoing pandemic. Immediately afterward, the House adjourned its legislative session for the year, members still wearing protective masks as they gathered their bags and headed to Juneau’s airport.

The House declined to vote on a Senate-passed measure that would have allowed lawmakers to meet by teleconference.

“The House just adjourned, passing the bill over to the Senate, with the hope that the Senate will in turn pass the bill, and we will have finished our work down here, which was to get over $1 billion out into the streets and into the hands of Alaskans who desperately need it for economic relief,” said Speaker of the House Bryce Edgmon, I-Dillingham.

The Senate has scheduled a vote for 8:30 a.m. Wednesday, but the outcome is not in doubt. Indicating its intent, the Senate voted 19-1 Tuesday morning, approving an identical, symbolic bill that will not advance.

Last week, a House-Senate committee approved $908 million in aid for small businesses, municipalities and the fishing industry, part of almost $1.5 billion authorized by Congress for Alaska to alleviate the economic consequences of the coronavirus pandemic.

Juneau resident Eric Forrer filed suit two days later, saying the money needed to be approved by the entire Legislature, not just the 10 members of the committee. Anything else would violate the Legislature’s constitutional control of the state budget, he contends.

Lawmakers said they needed to act quickly to resolve the lawsuit. Sen. Mike Shower, R-Wasilla, said 10 to 12 Alaska businesses are going out of business per day, citing estimates from the Alaska Department of Commerce, Community and Economic Development.

Rep. Zack Fields, D-Anchorage, was excused absent from the House vote. He has a newborn daughter and said he didn’t want to risk exposing her to COVID-19 with his travel.

The lone “no” vote in the House came from Rep. David Eastman, R-Wasilla. He said aid is needed but the legislative process in this case is fatally flawed.

Legislators were being asked to “rubber-stamp” a plan written by the governor and previously approved by the Legislative Budget and Audit Committee, Eastman said. Lawmakers had no chance to offer amendments if they saw a problem with that plan.

“Even if I happen to agree with the governor and think he’s doing great, the appropriating comes first, and the governor spends the money,” Eastman said.

He said he would have liked to see discussion of the Alaska Permanent Fund dividend.

In the Senate, Sen. Lora Reinbold, R-Eagle River, expressed similar concerns before casting the lone “no” vote in that side of the Capitol.

Other lawmakers said they were unhappy about the process but not enough to vote against it.

Geldhof said he believes the Legislature failed to fix the constitutional problems with the aid distribution.

He said that in his view, lawmakers needed to pass a bill that explicitly “authorizes” — a word used in the state constitution — aid payments. Instead, legislators merely ratified the governor’s plan for aid, he said. That’s a problem, because the governor doesn’t control the state checkbook. Ratifying an unconstitutional action doesn’t make it legal, Geldhof said.

“Authorizing the expenditure is the language in the Constitution. It’s included here in the bill," she said, referring to the bottom of the first section.

The Legislature notably took a similar action in 1987, ratifying budget cuts made by then-Gov. Bill Sheffield in 1986. Giessel said the Legislature modeled this year’s move on that action, which was upheld by the Alaska Supreme Court.

Despite the continued disagreement, Geldhof said Forrer is not interested in causing pain for Alaskans and will not delay aid payments.

“We will sort out the constitutionality of their act down the trail, but the money needs to go out,” Geldhof said.