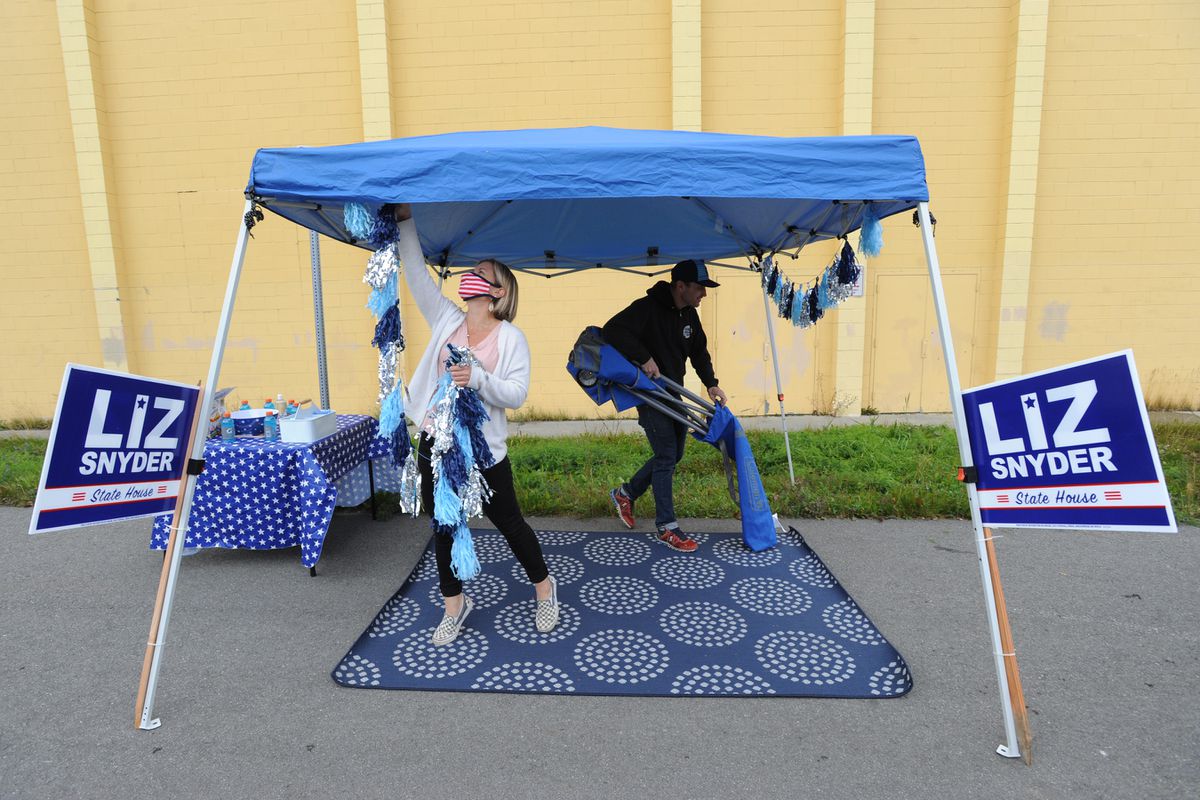 With Alaskans isolating themselves to protect against COVID-19, candidates for the Alaska Legislature are getting creative as they seek votes.

Many are deferring fundraisers at restaurants and instead asking for money on Zoom. They’re texting and calling droves of potential voters. Most of the few in-person events still taking place have moved outside or are otherwise limited. Door-to-door campaigning is still a mainstay of many campaigns, however.

Liz Snyder, an Anchorage Democrat running against incumbent Republican Rep. Lance Pruitt, said that this year, the key idea is to let voters decide how much contact they want. She has entirely eliminated her door-to-door campaign, instead holding events where she sets up her campaign bus and allows voters to come to her.

“Giving folks a choice, that’s the key,” she said.

Pruitt goes door to door wearing a mask, and when he knocks or rings a doorbell, he takes a few steps back.

“I just find that going and seeing them in their place, letting them decide whether they want to talk through a door or a window, is pretty effective,” he said.

Nationwide, polling indicates Democratic voters and Democratic-leaning independents are more likely to stay isolated and wear masks to prevent the spread of COVID. Pruitt said he sees a similar pattern when he’s gone door to door in his Anchorage district.

“I think there’s a partisan difference. I’m not sure how COVID ever became a partisan issue, but it has,” said Sen. Peter Micciche, R-Soldotna.

On Wednesday night, the Alaska Republican Party held an invite-only fundraiser at Matanuska Brewing Company to boost its candidates seeking election to the Alaska Senate. Pictures taken at the event showed incumbent senators and candidates standing side by side, maskless in a crowded room. Micciche was one of the event’s hosts.

“We tried our best to stay within the expectations of the mandates,” he said of Anchorage’s public health restrictions.

Those restrictions limit indoor gatherings to 30 people if food and drink are served. Micciche said there were “well over 100 people who cycled through” the event, with fewer than that present at any one time.

“I believe it was safe,” he said. “For most of the event, people were relatively spread out. I was there with my wife and three younger daughters, and I did not feel that they were at any more risk than the girls going to school or us having a fundraiser outdoors here at the house."

At the same time as the Senate Republican event, the Alaska Democratic Party hosted a fundraiser on Zoom to support its candidates for the Alaska House of Representatives.

Zoom has been a reliable place to find campaigns this year, with candidates advertising their events on Facebook and encouraging supporters to tune in.

To avoid boredom and “Zoom fatigue,” candidates have tried to offer something extra.

As a new candidate, she doesn’t have a lot of name recognition in her district, Henslee said.

“That is a reason why doorknocking is so important for a campaign like mine,” she said.

“Other than the fact that I’m wearing a mask and trying to social distance ... it’s really very similar to the last election cycle,” she said of her door-to-door effort.

Rasmussen is on the ballot with independent Stephen Trimble and Alaskan Independence Party candidate David Nees.

Until the past week and a half, Trimble had eschewed door-to-door campaigning in favor of “neighborhood chats” where he would be outside, have masks on, and invite neighbors to come by. Now, he’s going door to door with masks and social distancing as well.

“As we get closer to voting, you have to accelerate the number of people you can touch,” he said.

Where in-person events do happen, candidates are trying different techniques, including holding events in aircraft hangars, where space allows social distancing and regulating airflow is easy.

Sen. David Wilson, R-Wasilla, is planning an event with Republican House candidate Kevin McCabe at the Wasilla Airport. Turnout at an event in a small cafe earlier this year wasn’t great, Wilson said, but he thinks views of COVID are softening and people are now more willing to go places, especially when they’re socially distanced.

Snyder, seeking another way to socially distance, is inviting supporters to make marshmallow s’mores around campfires while calling potential voters.

Ferguson’s district includes the North Slope and Northwest Arctic Borough. She said villages there have closed themselves to unnecessary travel, so that means no in-person events at all. Instead, she’s doing her campaign almost entirely by phone and Zoom. (Her opponent didn’t return phone calls.)

But campaign events are only half the story, Pruitt said. COVID has also changed the way Alaskans are voting this year. The number of ballots cast by mail in the Aug. 18 primary was a record high for all elections, not just primaries, and turnout in the November general election will be three times as high, if historic trends hold.

The Alaska Division of Elections sent thousands of absentee ballots to international voters on Friday. Absentee voters in Alaska and the other 49 states will start receiving their ballots in October.

Voters are being told to fill out their ballots as soon as possible and mail them in a week before Election Day.

“How does that play if half your votes are cast by October?” Pruitt asked.

He, Wilson and others said they’re making special efforts to pursue absentee voters. Requesting an absentee ballot means a voter is interested in the election, and the state provides lists of Alaskans who have requested a mail-in ballot. That gives candidates both the means and the motive to get in contact.

Rasmussen said she’s been writing a letter that will be sent to absentee voters just as they get their ballots in October. Another mailer will go in the mail afterward, reminding voters to fill out their ballot.

Just as reactions to COVID differ by political party, so do absentee voting patterns. In the primary, 61% of ballots counted on election day were cast for Republican candidates. (That includes some early votes as well as ballots cast on the day of the election.)

Among ballots counted after election day — this includes all absentee votes — only 40% were for Republican candidates.

That trend means candidates not only have to change the way they campaign, they have to do it much more quickly than normal.

“That’s going to be the biggest story of the year,” Pruitt said.