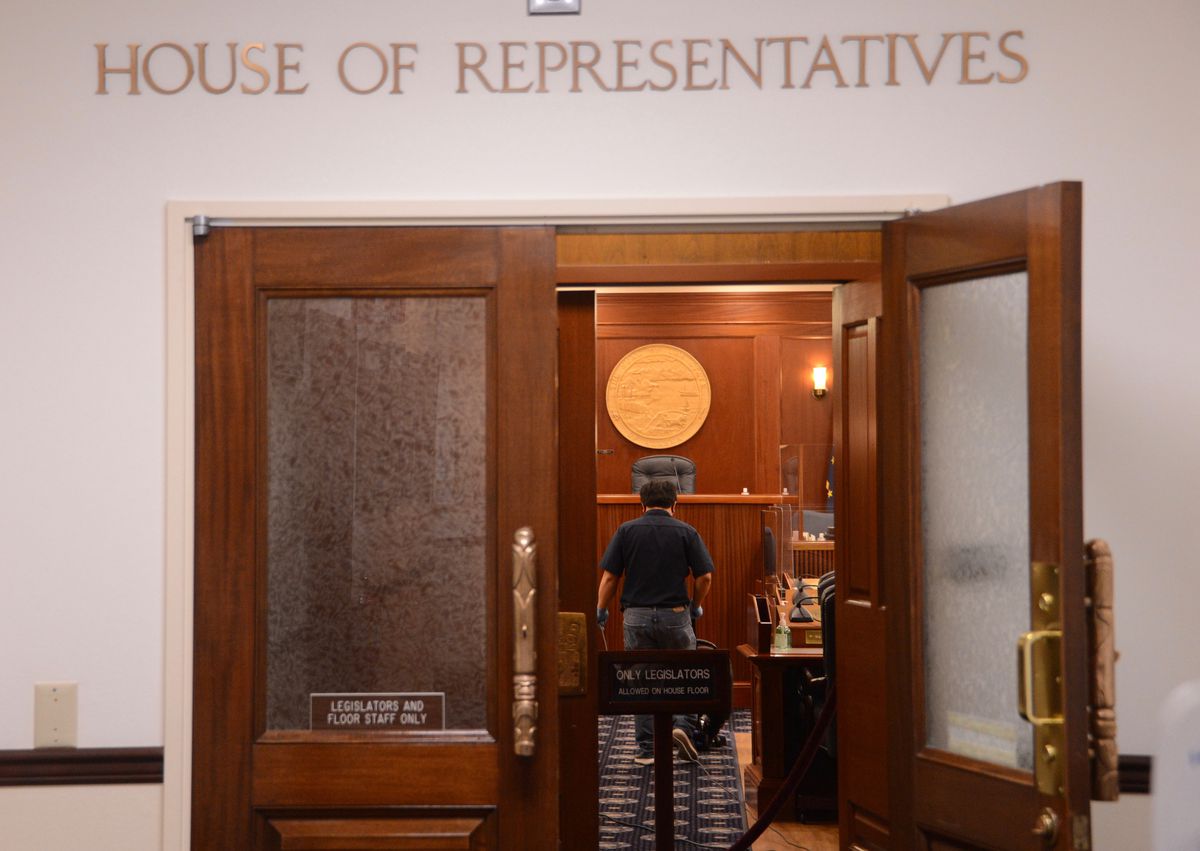 The chambers of the Alaska House of Representatives are seen empty on Thursday, Jan. 28, 2021 except for janitorial staff as Gov. Mike Dunleavy delivers the annual State of the State address from Anchorage. (James Brooks / ADN)

The chambers of the Alaska House of Representatives are seen empty on Thursday, Jan. 28, 2021 except for janitorial staff as Gov. Mike Dunleavy delivers the annual State of the State address from Anchorage. (James Brooks / ADN)

JUNEAU — Two weeks into the 32nd Alaska State Legislature, members of the state House of Representatives say they are optimistic about ending a leadership deadlock soon, but cannot point to tangible progress.

The ongoing deadlock, now the worst since statehood by some measures, has left the House unable to appoint even a temporary leader and is threatening Alaska’s response to the COVID-19 pandemic.

Since November, that response has been legally justified by a series of 30-day emergency declarations from Gov. Mike Dunleavy. The current declaration expires Feb. 14.

On Tuesday, state health commissioner Adam Crum said he does not expect the governor to issue any additional orders.

“The governor cannot extend the current declaration and will not issue another one while the Legislature is in session,” said Jeff Turner, a spokesman for the governor.

Any further extensions must be approved by the House, which is currently unable to act.

Since December, the 40-person House has been evenly split between a caucus of Republicans and a caucus that includes 15 Democrats, four independents and one Republican.

“We’re basically in the same place: 20-20. We’re feeling a little more confident that we’re starting to feel a little movement, but we aren’t there yet,” said Rep. Steve Thompson, R-Fairbanks.

Negotiations between the two blocs have taken place in a variety of formats, with Thompson and Rep. Bryce Edgmon, I-Dillingham, as the heads of each delegation. Lawmakers are also speaking to each other one-on-one and in small groups by telephone and in person.

“I think the discussions have been more fruitful,” Edgmon said, “but it’s also clear that the two sides of 20 right now are pretty firmly entrenched.”

In theory, any one of the House’s members can cross the aisle and break the deadlock. Rep. Bart LeBon, R-Fairbanks, said that’s not an easy decision, because anyone who does so might empower legislators whose ideas they oppose.

Two years ago, he was among seven Republicans who helped create a bipartisan coalition after 31 days of deadlock. That is the record for longest impasse since statehood, but that year lawmakers managed to name a temporary leader — a largely ceremonial role — after three days. They still haven’t managed to take that step this year.

If someone crosses the aisle, they’ll be rewarded for doing so, possibly with an influential position on the Finance Committee, which crafts the state budget.

“But there’s more than the Finance Committee. There’s all the other committees. And maybe I had a bill or two to champion, and I’m now thinking, ‘Oh boy, I’m in the majority, I can help this bill.’ But the speaker is going to assign those bills to committees chaired by (other legislators) who may or may not agree with me that my bill is that important,” LeBon said.

Rep. Tom McKay, R-Anchorage, said anyone who crosses the aisle also has to consider the legislators they’re leaving behind.

“It’s almost like breaking up a relationship,” he said. “You’re kind of dumping 19 people and saying, ‘You know what, I’m leaving you.’ And how do you face those folks after you’ve done it? I don’t know.”

McKay, who defeated one of those coalition members, said when he went door to door, he campaigned on the issue, and voters were interested.

“I think that was a loud message from the Republican base,” said Rep. Sara Rasmussen, R-Anchorage.

Rep. Calvin Schrage, I-Anchorage, said there’s a fear of “party blowback” on both sides of the aisle, not just among Republicans.

Not all Democrats agree with that assessment. Rep. Ivy Spohnholz, D-Anchorage, said the passage of Ballot Measure 2, which creates nonpartisan primary elections, will encourage bipartisanship. Republican lawmakers said that could be the case in the future, but the measure has been challenged in court, so its impact right now isn’t certain.

Some lawmakers have proposed that the deadlock be resolved by creating a coalition from scratch with equal numbers of Republicans and lawmakers from the coalition bloc.

“You have a group of people who still think that you’re going to get 25 members to come over and form something in the middle. I don’t. I personally don’t see that happening at this point,” she said.

While the impasse continues, House lawmakers are keeping themselves busy in other ways. New legislators are taking training courses and holding mock committee hearings to practice procedures. Schrage said he’s been taking a deep dive into the budget. Rep. Liz Snyder, D-Anchorage, said she’s been meeting with different community organizations to hear their thoughts. McKay said he’s been learning from binders full of legislative rules and procedures.

Both blocs said they’ve been holding frequent meetings of their own members to discuss ideas for future legislation and organization, but there are plenty of signs that some lawmakers are using disorganization as an excuse for long lunches and afternoon departures from the Capitol, whose back parking lot frequently begins to empty before 5 p.m.

Many members of the House said the best chance to break the deadlock will come from public pressure.

Some said that pressure will intensify if there are real-world consequences to the deadlock. Two years ago, Gov. Mike Dunleavy’s proposed state budget sparked organization. Many lawmakers said they do not think there is a similar catalyzing force this year, but among those who did, all mentioned the COVID-19 emergency.

“It will take pressure from people, from people outside of the Legislature, the community,” Spohnholz said.

“If folks think that people need to set aside party politics to do what’s right for Alaska, they should say so.”

Correction: The original version of this article incorrectly stated that the current emergency declaration expires Feb. 15. It expires at midnight on the morning of Feb. 14.