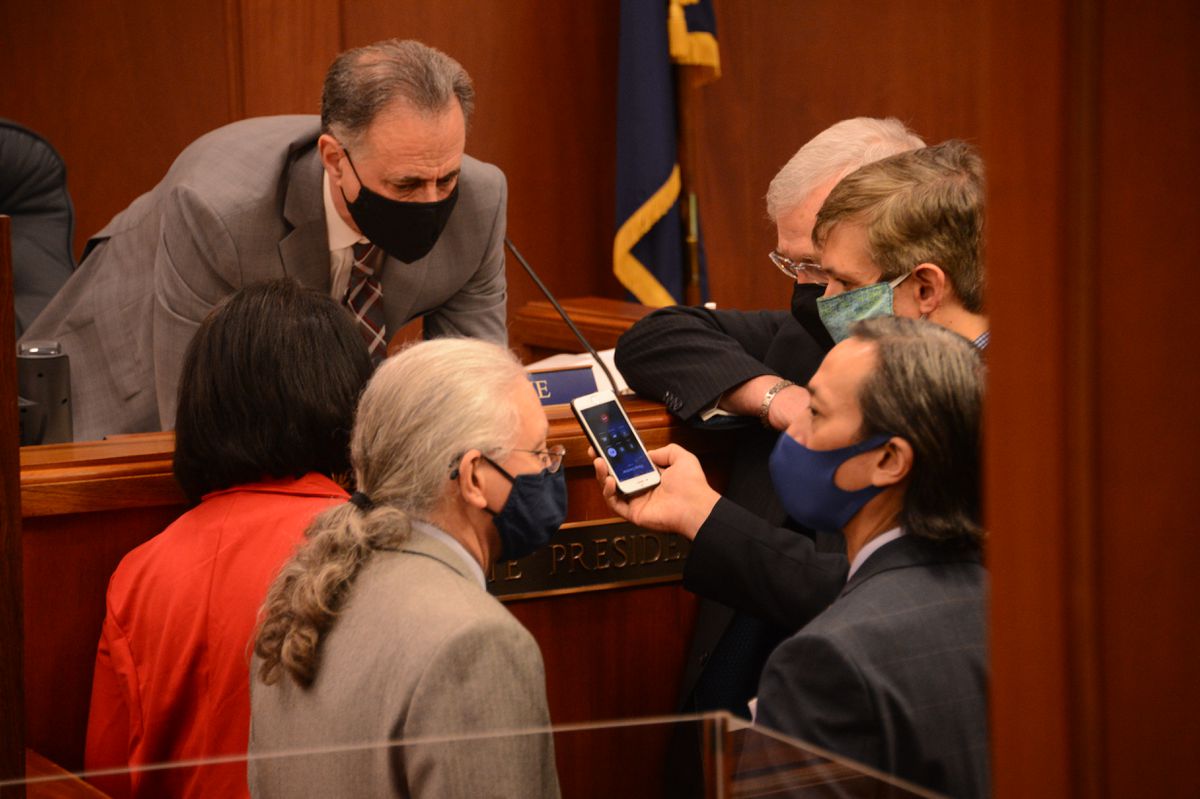 Senators crowd around the cellphone of Sen. Bill Wielechowski, D-Anchorage, as they consult the Alaska Legislature's legal staff on Wednesday, Feb. 3, 2021 during a break in the debate over SCR 1, a resolution that would allow legislators to vote remotely if required by COVID-19 quarantine. (James Brooks / ADN)

Senators crowd around the cellphone of Sen. Bill Wielechowski, D-Anchorage, as they consult the Alaska Legislature's legal staff on Wednesday, Feb. 3, 2021 during a break in the debate over SCR 1, a resolution that would allow legislators to vote remotely if required by COVID-19 quarantine. (James Brooks / ADN)

JUNEAU — The Alaska Senate has approved a resolution intended to allow lawmakers to vote by teleconference if COVID-19 begins spreading within the state Capitol, but some who voted for that resolution are questioning the need for continued anti-pandemic measures in Alaska at large.

On Tuesday, Sens. Mia Costello, R-Anchorage; Shelley Hughes, R-Palmer; and Lora Reinbold, R-Eagle River all said they were skeptical of a proposal by Gov. Mike Dunleavy to extend Alaska’s COVID-19 emergency past Feb. 14.

Their skepticism is significant, because they could block the governor’s idea. All three are members of the Senate’s Health and Social Services Committee, which is scheduled to hear the proposal at 1:30 p.m. Thursday.

“So far, I do not believe a claim has been justified to extend it,” Costello said on Wednesday, explaining that she doesn’t know what the emergency is being used for.

“I want to know what purposes are served by an extension before I support it,” he said.

The state of emergency provides the legal underpinning for the state’s public health orders, including the mandatory screening of people entering the state. In written testimony, medical experts from across the state have asked legislators to approve the extension.

Jared Kosin, president and CEO of the Alaska State Hospital and Nursing Home Association, wrote that hospitals and clinics could lose surge capacity and space in quarantine units because the emergency is being used to waive “physical environment requirements” and “limitations on practitioners and health care workforce.”

If the proposal is not passed, “hospitals, nursing homes and other health care providers (will be put) into a position of great uncertainty, and potentially force a drastic curtailment of COVID operations,” he said.

Mike Coons, president of a senior citizens organization in the Matanuska-Susitna Borough, wrote that he supports the continuation of the emergency because it “continues reducing the procurement time for the much-needed logistical support ... to get the vaccine out.”

Alaska has been in a state of emergency over COVID-19 since March 2020, but a Legislature-approved declaration expired in November. Since then, the governor has extended the emergency with a series of 30-day orders. The current order expires in February, and members of the administration have said the governor does not believe he can legally act again without legislative approval.

Many senators appear eager to end the emergency as quickly as possible, however. Several have raised legal concerns about the governor’s use of the 30-day extensions. During Tuesday’s Senate hearing, some members of the committee asked whether the governor’s bill could be slimmed down, whether the extension could be ended early, or if the state could act through other means.

By Tuesday, members of the committee had already received more than two dozen letters from Alaskans asking them to reject the governor’s bill.

Some senators appear eager to shed virus restrictions placed on themselves as well.

After Costello shared her thoughts on Wednesday, the Senate Judiciary Committee began working in the room where Costello spoke during a news conference. Reinbold, the committee’s chair, invited her fellow senators to remove their face masks, incorrectly stating that committee chairs could change the Capitol’s COVID-19 rules during committee meetings. Masks have been required in the building since last year.

After being told she was mistaken, she and fellow senators Hughes, Robert Myers, R-North Pole, and Mike Shower, R-Wasilla, put their masks back on.

“There was a misunderstanding today in Senate Judiciary. ... I understand the confusion. I’m understanding it’s not going to occur again,” said Senate President Peter Micciche, R-Soldotna.

Even if a version of the governor’s proposal passes the Senate, it would still need approval by the House, which remains unorganized and unable to consider legislation.