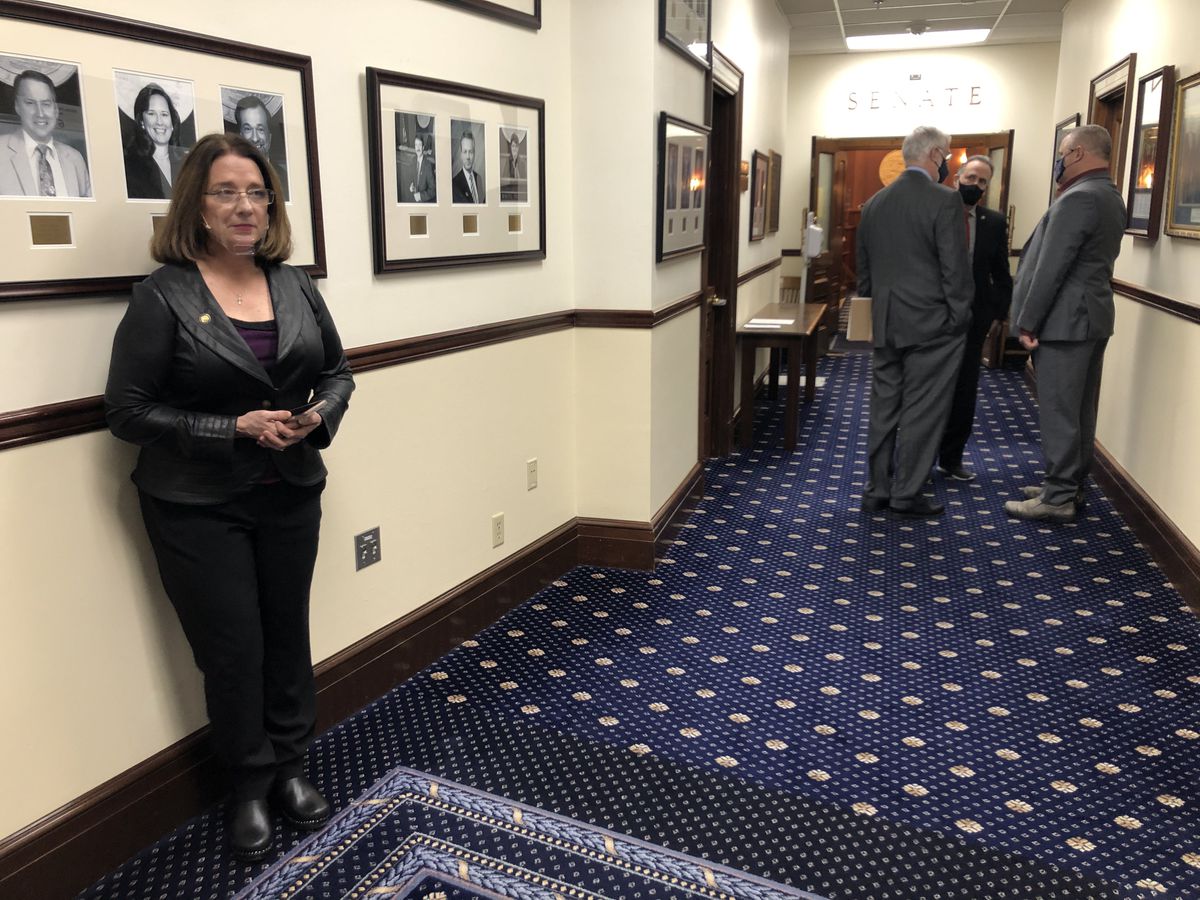 JUNEAU — The case of a severely ill Alaska Senate aide is influencing how the Alaska Legislature deals with a senator who has declined to follow the Legislature’s pandemic precautions.

As of Thursday, seven people who work in the Alaska Capitol have tested positive for COVID-19 since an outbreak began in late February. An additional 22 people have quarantined in connection with those cases. Konrad Jackson, a top aide to Senate President Peter Micciche, is one of the seven cases and has been hospitalized with significant breathing problems.

A spokesperson for Bartlett Regional Hospital in Juneau confirmed that Jackson is a patient there. Through the spokesperson, Jackson referred questions about his condition to Capitol officials.

Micciche, who had a mild case of COVID-19 in the fall, had been seeking to relax the Capitol’s COVID-19 testing and screening requirements before the outbreak here.

“Yeah, it’s changed my opinion,” he said of Jackson’s case. “Talking to him now and hearing him struggle makes it real for me.”

On Wednesday, Micciche was one of 18 senators who voted in favor of excluding Sen. Lora Reinbold, R-Eagle River, from most in-person legislative activities. Reinbold did not vote, and Sen. Mike Shower, R-Wasilla, voted no.

Reinbold hasn’t done that. For the first seven weeks of the legislative session, she’s worn a loose-fitting face shield and ignored the testing and screening requirements.

Those testing requirements led to the identification of cases in the Capitol outbreak, and Micciche said that makes them critical for preventing COVID-19 spread in a place where 450 people work in close confines.

Despite Wednesday’s vote, Reinbold returned to the Capitol on Thursday and attempted to attend two committee hearings. At the second, she was confronted by Micciche, Senate Rules Committee Chairman Gary Stevens, R-Kodiak; Sen. Mia Costello, R-Anchorage; and Shower.

“Everyone else in this building is following the rules. Every single person,” Micciche told Reinbold during a tense moment in a Capitol hallway.

“My chief of staff is fighting for his life right now, Lora. I’m not screwing around anymore. We’re done. You’re going to follow the rules or you’re going to leave the building. I’m never unpleasant but I’m getting really bothered. Quit playing games,” he said.

One of Reinbold’s aides attempted to capture the scene on cellphone video, but Stevens told her to shut off the camera or be fired. Reinbold has put previous confrontations on Facebook.

Reinbold claimed she saw Micciche in a Senate hallway without a mask and said she felt like she is “caught in a Catch-22″ because she needs to represent her constituents but isn’t being allowed to do so. (Micciche said he was exiting an office and putting on his mask when he met Reinbold.)

Stevens said that if Reinbold enters any committee hearing without a mask that follows the rules, legislative staff will leave and the meeting will be canceled.

“Staff will not be in there if you are not wearing a proper mask,” he said.

Reinbold eventually agreed to teleconference into the hearing, but without her physical presence, the Senate State Affairs Committee was unable to advance several bills.

Later in the day, Micciche said he is frustrated that someone can look at the risks of COVID-19 “and not help protect the others in the building.”

“We’re going to do our part to get through this session, keeping people safe. And if folks can’t follow the rules, they will not be here,” Micciche said.

Reinbold ended Thursday by sharing a link to Rudyard Kipling’s poem, “If—”.

That poem begins, “If you can keep your head when all about you / Are losing theirs and blaming it on you,” and concludes, “Yours is the Earth and everything that’s in it, / And—which is more—you’ll be a Man, my son!”