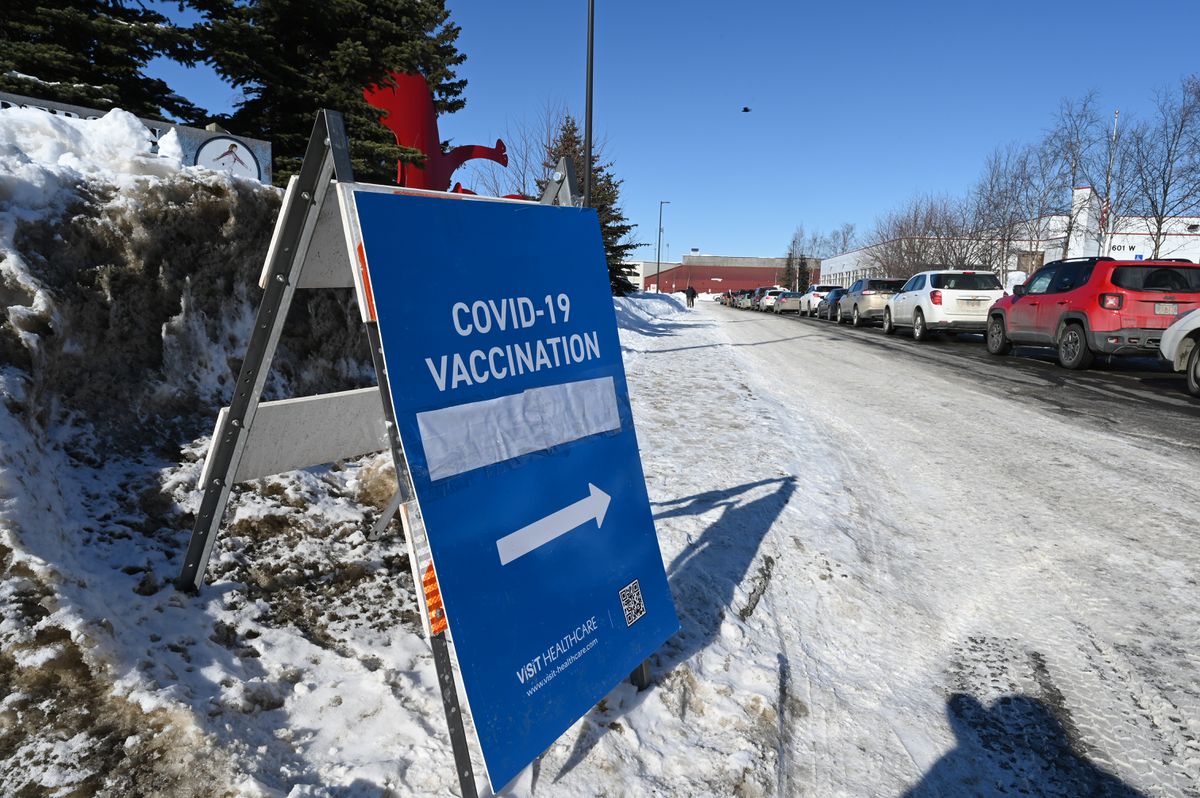 People wait in their cars during the first no-appointment drive-through clinic in the parking lot of Dempsey Anderson Ice Arena in Anchorage on Friday, March 19, 2021. (Anne Raup / ADN)

People wait in their cars during the first no-appointment drive-through clinic in the parking lot of Dempsey Anderson Ice Arena in Anchorage on Friday, March 19, 2021. (Anne Raup / ADN)

JUNEAU — Alaska’s COVID-19 emergency expired on Feb. 14, but the pandemic isn’t over.

The summer fishing and tourist seasons promise an influx of visitors from out of state, and public health officials are asking for continued powers to deal with the pandemic. The Alaska Legislature, which may grant those powers, is divided about what to do.

The coalition majority in the House of Representatives says the emergency’s end was a mistake. It is promoting a bill that would retroactively restore Alaska’s state of emergency and extend it until September.

“That is a priority for our caucus,” said House Speaker Louise Stutes.

At the start of the year, Gov. Mike Dunleavy had similar thoughts. But since then, case counts have fallen and Alaska’s vaccination rate has become among the best in the country.

Soon after Stutes’ comments on Thursday, the governor wrote Stutes a letter saying that he no longer believes a disaster declaration is necessary.

Senate President Peter Micciche, R-Soldotna, said the letter carried an implication: “You can pass anything you want to, but if (the governor) is not going to sign it, it’s not going to happen.”

Micciche and the Republican-led majority in the state Senate are preparing to unveil what they call “disaster declaration lite,” a package of measures intended to address the problems identified by the governor and other state officials. It doesn’t include a broad state of emergency.

Right now, the chief difference between the two approaches is who’s in charge: Under the House strategy, the governor is empowered by the state’s disaster act to take unilateral action. In the Senate approach, the governor would have to request permission from the Legislature to take action beyond a narrow set of powers.

“We’re patiently waiting to see what the Legislature does,” state emergency manager Bryan Fisher told a group of local government officials on Thursday.

[What can you do after getting the COVID-19 vaccine? Here’s how Alaska’s top public health experts are adjusting.]

Heidi Hedberg, head of Alaska’s Division of Public Health, told the group that Alaska Airlines and Delta Airlines are planning a full schedule of flights to Alaska this summer, and even if cruise ships don’t come to Alaska in 2021, “there’s certainly going to be a lot of tourism if all of those flights are booked.”

Until the emergency declaration expired, Alaska had required visitors to take a COVID-19 test when arriving in the state. Now, that testing is optional.

Hedberg said the testing remains important, because the state needs to track COVID variants and some vaccinated people have still managed to catch the disease.

“They still have mild symptoms, but they’re still positive,” she said.

Stutes said the airport testing is also critical for seafood processors who fly staff into remote parts of the state for the salmon and groundfish seasons.

Hedberg told local government officials that “now is the time” to prepare for that influx, but she also told them that the health department doesn’t think it needs a full-fledged emergency declaration like that proposed by the House.

“We have been clear that we need limited authorities to continue to respond to this pandemic. We don’t need all of the authorities within the disaster (declaration),” she said.

Micciche said the Senate’s plan is designed to give public health officials only the powers they have requested, plus a few more that local governments have sought. School districts, for example, would be allowed to spread federal aid across multiple years.

The Senate is advancing additional requests in separate legislation, and some of those changes will be permanent. One bill, allowing corporations to hold required annual meetings by teleconference, has already passed the House and the Senate.

The House, Senate and governor agree that the end of the disaster declaration created problems for SNAP, the program commonly known as food stamps.

Without a declared disaster, Alaska is no longer eligible for $8 million per month in federal aid for the program, and Senate Minority Leader Tom Begich, D-Anchorage, said it is “one of the most substantial issues” caused by the end of the disaster.

Stutes said it’s one of the prime reasons for retroactively extending the state’s COVID emergency.

But the governor’s office said the Alaska Department of Health and Social Services has been working with the federal agency that pays the aid, and that agency “has flexibility within their regulatory language for Alaska to continue receiving these benefits without an explicit disaster declaration,” said Corey Allen Young, a spokesman for the governor.

Young said “DHSS is working with the legislature on a limited authorities bill necessary for our ongoing COVID-19 response and recovery plan, and with specific language ... for the state to continue receiving EA SNAP benefits.”

That language is expected in the Senate’s bill, but the text has not yet been released.

Stutes said the Senate’s approach falls short in general because it doesn’t grant flexibility — what happens if something arises and the Senate bill hasn’t taken it into account?

“You need to know this is going to work, not guess at it,” she said.

“What is the downside?” Stutes said about the House’s proposed disaster extension. “Can you give me any reason why we shouldn’t have it?”

“My sense is a lot of Alaskans believe that we are emerging from the need for an emergency declaration,” he said.

Some anti-COVID measures imposed by local governments, such as mask mandates and business closures, have been intensely unpopular among some Alaskans. The state’s emergency declaration was never used to require masks statewide and only briefly was used to close businesses, but a significant number of people have testified against extending the emergency declaration because they fear it encourages those local actions they oppose.

LeBon said that with vaccination counts rising and case counts falling, there isn’t as much need to give the governor sweeping powers, and some legislators have voiced concerns about the extent to which the governor can act unilaterally.

“I think that’s one of the concerns — overreach of the governor’s authority,” he said.