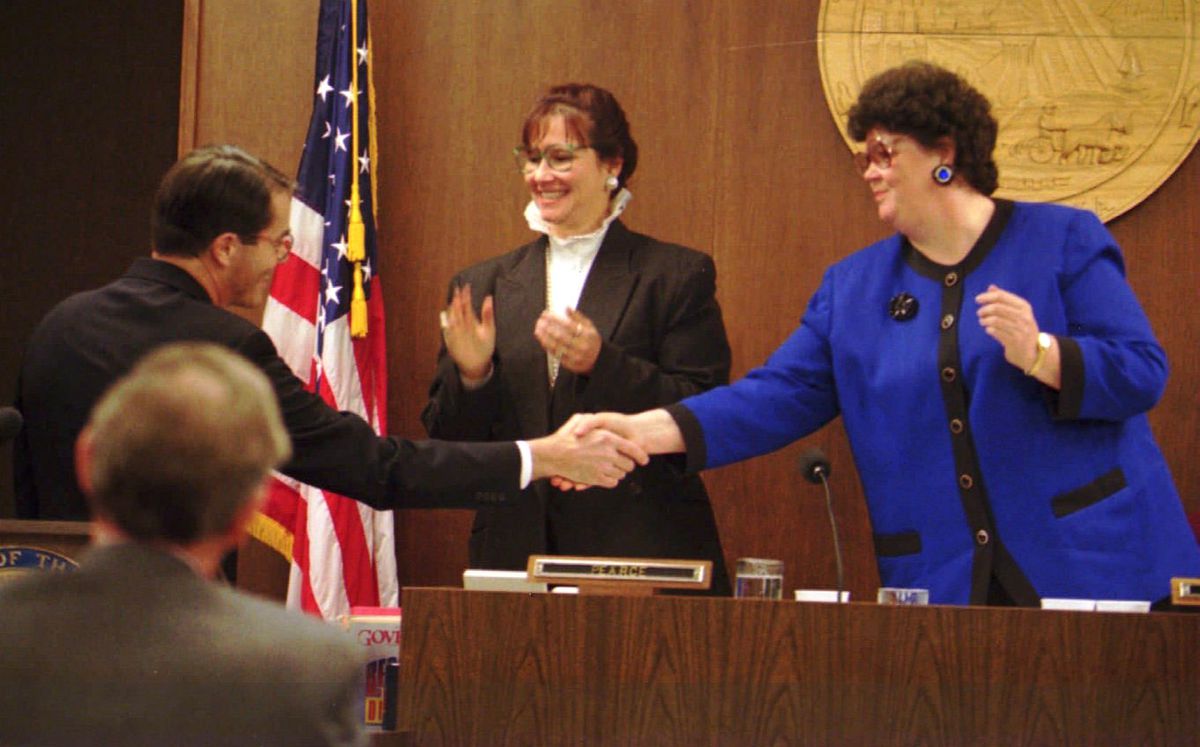 JUNEAU — The second woman to serve as speaker of the Alaska House of Representatives has died.

Gail Phillips, 76, died at her Anchorage home Thursday morning, according to state legislators and a message posted by her daughter, Robin, on social media. Robin Phillips said a celebration commemorating her mother’s life will be held later this year.

“Gail was the instigator of the grand adventure in politics and in life,” Robin Phillips said by email. “She made sure we felt the same passion she did. She was a mentor and a leader. She was a force of nature. Through her we experienced all aspects from clam digging to gold mining to family gatherings. Nothing was done small; everything was on a large scale and with vigor.”

Phillips had suffered from cancer and returned home after ending treatment and leaving hospice.

Rep. Bryce Edgmon, I-Dillingham, offered condolences Thursday on the floor of the Alaska House of Representatives, and other condolences poured in as the day progressed.

Today Alaska lost an incredible woman with the passing of Gail Phillips. She was a friend, mentor, great legislator, & was incredibly passionate about Alaska. I was honored to serve alongside her in the Alaska State Legislature & saw firsthand her passion & leadership in action. pic.twitter.com/X0OAH0BABl

Gov. Mike Dunleavy said state flags will fly at half-staff in her honor.

Phillips was elected to the Alaska House of Representatives in 1990 as a Republican representing the Kenai Peninsula. Re-elected in 1992, she was named the House majority leader. She became speaker of the House in her third term and was confirmed to the position again in her fourth term. After a fifth term, she did not seek re-election. She served in the Legislature from 1991 to 2001, and previously served on the Homer City Council and Kenai Peninsula Borough Assembly.

Initially a candidate for governor in 2002, she switched to the lieutenant governor’s race after Frank Murkowski announced his campaign. She lost the Republican primary that year but stayed involved with politics in a variety of roles, including as a special assistant to Murkowski, president of a pro-Pebble mine group and an adviser to Mead Treadwell in his 2014 run for U.S. Senate.

In addition to her political work, Phillips was known as a member of the “Old Iditarod Gang” that helped create the Iditarod Trail Sled Dog Race. To recognize her work, the Iditarod named her its honorary musher during the 2020 race.

Born on May 15, 1944 in Juneau, Phillips was the first of seven daughters born to Lois and Wallace McIver. She attended Nome High School, graduating in 1962, and the University of Alaska Fairbanks, graduating in 1967. She married her husband, Walter Phillips Jr., on Aug. 14, 1965 in Nome during a double ceremony that also included the marriage of Gail’s sister Barbara.

The Phillipses lived in Fairbanks, Nome, Homer and Juneau and Anchorage and had two daughters, Kim and Robin.

In addition to her work in the Legislature and with the Iditarod, Phillips worked for a variety of aviation companies, a series of mines, the Alaska Aviation Museum and as executive director of the Exxon Valdez Oil Spill Trustee Council.