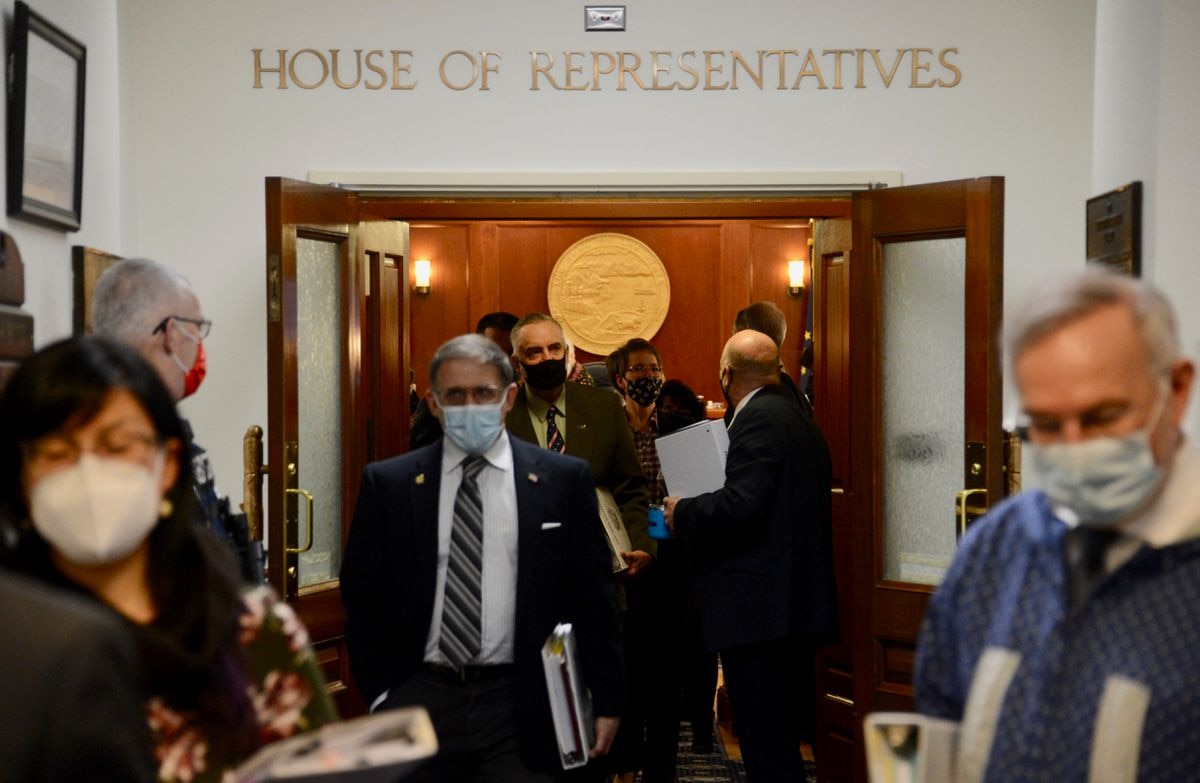 Members of the Alaska House of Representatives leave the House chambers on Friday, March 26, 2021 at the state Capitol in Juneau. (James Brooks / ADN)

Members of the Alaska House of Representatives leave the House chambers on Friday, March 26, 2021 at the state Capitol in Juneau. (James Brooks / ADN)

JUNEAU — The Alaska House of Representatives voted 22-15 on Friday to retroactively extend Alaska’s pandemic-related state of emergency through the end of September.

Although Alaska’s COVID-19 vaccination rate is rising, a majority of House lawmakers said it was important to provide the governor with flexible emergency powers, including the ability to impose mandatory COVID testing at airports and to accept millions in federal food aid for the poor.

The governor urged the House to take a narrower approach that would allow the state to accept the aid without a declared state of emergency, but lawmakers voted him special powers anyway.

Friday’s vote must be confirmed by the Alaska Senate, but leading senators are already planning changes to the House-passed law to make it more in line with the governor’s vision.

Without action by the Legislature before April 1, Alaska will lose access to approximately $8 million per month in federal SNAP benefits, commonly known as food stamps.

Those benefits are paid to states in a declared emergency, and that money amounts to 2.2 million meals per month, Cara Durr, public engagement director at the Food Bank of Alaska, said in February.

The money can still be paid, albeit late, if the Legislature acts by April 15.

Alaska’s state of emergency expired Feb. 14, ending access to the federal money. It also ended a suite of health mandates issued by the Dunleavy administration in an effort to curtail the spread of COVID-19.

House Speaker Louise Stutes, R-Kodiak, said it’s important to give the governor the ability to reimpose those mandates if circumstances warrant.

“He can put the tools in his toolbox, and maybe use them and maybe not. But if, in fact, as we’ve seen in other states, there’s a spike, or there’s some kind of pandemic that rears its ugly head again the governor’s prepared,” she said.

All of the no votes against the bill were from Republican lawmakers who said they are opposed to granting unnecessary powers to the governor.

House Minority Leader Cathy Tilton, R-Wasilla, said that Alaska needs to move from a state of emergency to a “state of recovery.”

The governor said in a letter to lawmakers this week that he worries an emergency declaration could dissuade tourists from visiting Alaska.

As of Friday, 40% of Alaskans 16 and older have received at least one COVID-19 vaccination shot, according to state figures.