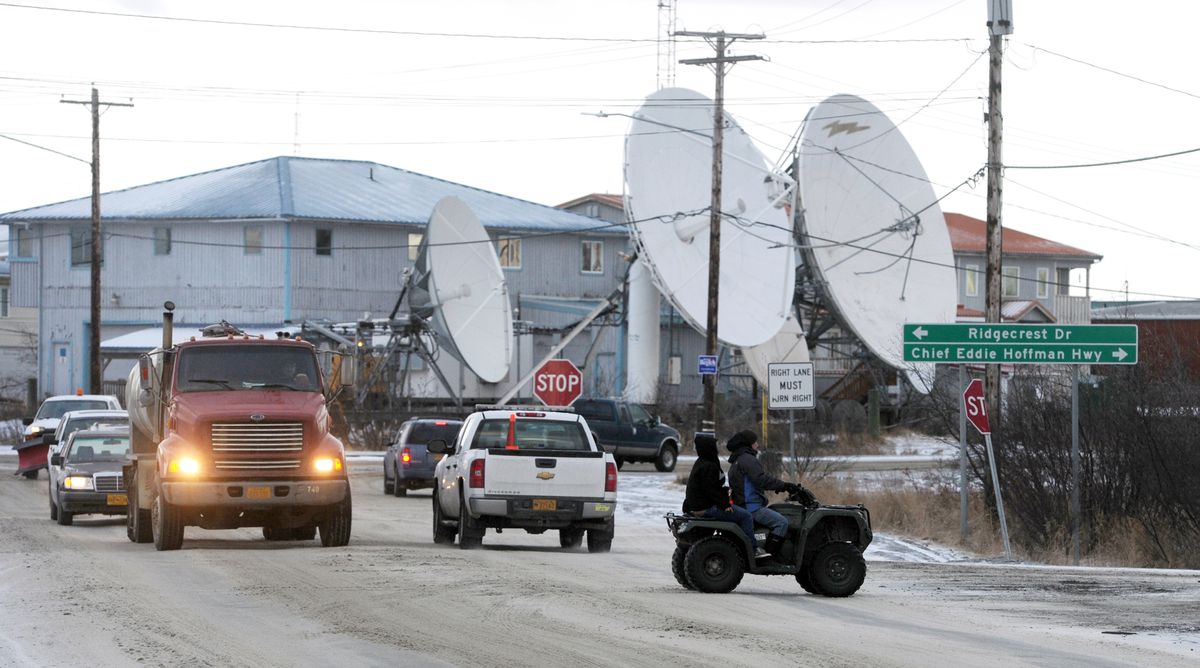 A Dunleavy administration proposal to allow off-road vehicles on Alaska’s roads is raising safety and enforcement questions in the state’s more populous areas even as its origins remain hazy.

The proposed policy would change existing regulations to allow four-wheelers, snowmachines and “all-purpose vehicles” on roadways with limits of 45 mph or less — a broad category that includes some of the busier roads in many communities.

Anyone riding on the road would need to be licensed, registered and insured, state officials said this week. They’d also need lights, brakes and a working muffler.

The governor’s office has refused to answer questions about who suggested the change and why, with officials saying they didn’t want to influence a public comment period that closes in mid-April.

Administration officials participating in a legislative hearing this week could not say who asked for the changes.

Generally, the proposal recognizes the fact that Alaska has one of country’s highest per capita ownership rates of ATVs, snowmachines and other off-road vehicles, according to Dave Donley, deputy commissioner of the Department of Administration. Donley testified before the state House Transportation Committee Tuesday, a hearing that continued on Thursday.

Alaskans in rural communities with few roads use four-wheelers and snowmachines as relatively cheap transportation across tundra or frozen swamps. But they’re also used around the state for recreation, quick trips to the store, and hunting or fishing access.

Alaska would be the only state with blanket road-riding provisions that include snowmachines.

Many say the change seems to make sense in more rural areas without heavy traffic. But as written, it would apply to areas across the state — including Anchorage — unless local governments opt out.

The changes conflict with the state’s own Strategic Highway Safety Plan developed by the Alaska Department of Transportation and Public Facilities, according to testimony Tuesday from University of Alaska Fairbanks civil engineering professor Nathan Belz, assistant director of the Center for Safety Equity in Transportation.

Vehicles designed for off-road use aren’t designed for asphalt, Belz said. Traumatic injury is more than twice as likely for people involved in accidents on roads rather than trails.

“In my professional opinion, I think these changes as proposed are potentially dangerous and ill-advised,” Belz said.

Some legislators questioned whether a standard driving test for a truck or car can provide assurance someone can safely operate a four-wheeler, snowmachine, tracked vehicle — or other.

“You would not need to get new one,” Wright answered. “Your existing Class D would cover you using your hovercraft.”

Other lawmakers said they appreciated the flexibility the change would give to someone who wanted to travel by snowmachine instead of plowing out, or jump on a four-wheeler for a quick trip down the road.

“I don’t picture this in the middle of downtown Fairbanks,” said Rep. Mike Cronk, R-Tok.

“I’m struggling to blame this on the road and not on the rider,” he said.

The shadowy origins of the proposal also drew scrutiny during the legislative hearing.

Rep. Ivy Spohnholz, D-Anchorage, asked Donley why the governor’s office wanted to shift from a policy of letting local governments write their own laws to one that forces them to opt out of a blanket policy.

“What is the problem you were trying to solve?” Spohnholz asked.

Donley said there are parts of the state that can’t currently write laws allowing people to ride on roads because there’s no local government. He referenced “groups and individuals” requesting a change but said he didn’t know who they were and said he’d get that information.

Five boroughs and eight cities around the state have approved the use of snowmachines and ATVs on local roads, with different restrictions.

Some local governments are happy with the status quo, including the city of Dillingham, Mayor Alice Ruby said Thursday in testimony before the committee, asking that the state refine the proposal to address only the communities that want more road riding.

Dillingham already adopted safe crossings in places and some ATV use on side roads with restrictions including helmets for younger riders and passengers, Ruby said.

“These regulations will create problems for us in areas where we’ve pretty much already established solutions and that is on the main roads,” she said.

Donley emphasized the ability of local governments to ban off-road vehicles on roads even if the state makes it legal.

But local officials say that could be complicated for second-class boroughs without policing and road authority, a category that includes two of the state’s three largest municipalities behind Anchorage: Fairbanks North Star and Matanuska-Susitna boroughs.

[On masks, Alaska Gov. Dunleavy tells local leaders to use power they say they don’t have]

Fairbanks mayor Jim Matherly said the city has safety concerns about off-road vehicles mixing with trucks and cars without adequate safety equipment. But while the city could opt out of the rule change, it’s possible the borough can’t, making enforcement tricky and putting more pressure on city police and fire departments.

“I believe there are going to be lots more accidents,” Matherly said.

A public safety spokesman declined to say how many comments have come in so far.

Comments on the proposed regulation change can be submitted in writing to Alaska Wildlife Troopers Director’s Office at 5700 E. Tudor Road, Anchorage, AK 99507, emailed to dps.awt.directors.office@alaska.gov or submitted through the Alaska Online Public Notice System at aws.state.ak.us/OnlinePublicNotices/default.aspx.