Alaska Senate prepares for final vote on COVID-19 emergency bill, with millions in aid at stake 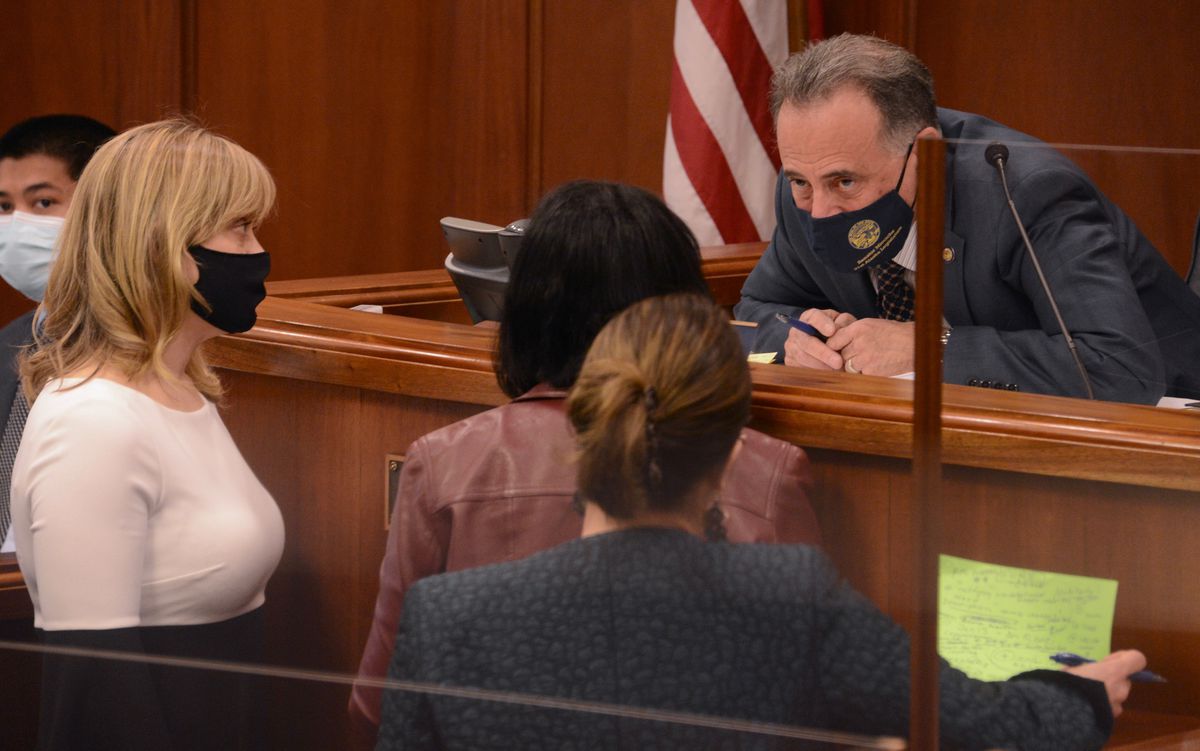 Senate President Peter Micciche, R-Soldotna, talks to fellow senators during a floor session on Monday, April 26, 2021 at the Alaska State Capitol in Juneau. The Senate is scheduled to vote Wednesday on a retroactive extension to the state's COVID-19 emergency. (James Brooks / ADN)

Senate President Peter Micciche, R-Soldotna, talks to fellow senators during a floor session on Monday, April 26, 2021 at the Alaska State Capitol in Juneau. The Senate is scheduled to vote Wednesday on a retroactive extension to the state's COVID-19 emergency. (James Brooks / ADN)

JUNEAU — On Wednesday, Eve Van Dommelen will be watching the Alaska Senate intently.

Van Dommelen is the policy and advocacy manager for the Food Bank of Alaska, and if the Alaska Legislature and Gov. Mike Dunleavy don’t finalize a COVID-19 emergency bill by Friday, the state will lose access to $8 million in federal food assistance for low-income Alaskans.

The Senate is expected to vote Wednesday on its version of a bill the House passed in March to retroactively extend Alaska’s disaster declaration through the end of the year.

The coalition House majority agrees with the Senate version, but if the measure is significantly amended by the Senate during floor debates Wednesday, it will not pass the House, said House Speaker Louise Stutes, R-Kodiak,

“This is really getting quite critical. It will be the 28th of April tomorrow. We have to have something passed and in place and before the end of April in order to be able to access the emergency allotments for this month,” Van Dommelen said.

Alaska’s COVID-19 state of disaster expired in February. When the state’s disaster declaration ended, so did its access to extra money for Supplemental Nutrition Assistance Program benefits, commonly called food stamps, which amounted to an additional $8 million — or more than 2.2 million meals — per month.

Conservative lawmakers in both the House and Senate oppose language in the bill that extends the emergency declaration.

Progressives and moderates said the governor needs the flexibility to deal with a pandemic that isn’t over.

There are consequences without compromise.

If lawmakers can’t act at all, the state will also lose access to some Federal Emergency Management Agency money. The exact amount isn’t certain, but it’s substantial.

Already, some Alaskans have lost the ability to consult medical specialists out of state. Because of COVID-19 travel restrictions, doctors have been consulting with patients by videoconference. When the state’s disaster declaration expired, Alaskans lost much of their ability to receive telehealth services.

Food stamp benefits are loaded monthly on to swipe cards given to Alaskans who need help, and if deposits suddenly drop, demand at food banks across the state will soar.

“When people get additional support, (food) pantries started starting to see fewer clients coming in. And when that money goes away, they see a big uptick in need for their services,” Van Dommelen said.

The aid would resume in May if the state passes an emergency bill (and Dunleavy signs it) after Friday, but there is a possibility that a deep disagreement between the House and Senate could prevent any action at all.

On Wednesday, the Senate will attempt to walk a metaphorical tightrope. The Senate is controlled by conservatives who say their constituents want Alaska’s COVID-19 emergency to end.

“My district does not support this,” said Sen. Mike Shower, R-Wasilla. “They don’t want to hear about COVID disasters anymore. They want to move on ... they want to see recovery.”

But the Senate has to contend with the predominantly Democratic coalition majority in the House. Lawmakers there say the crisis isn’t over. The number of new COVID-19 cases statewide has remained stubbornly constant despite rising vaccination numbers.

Stutes said she believes the Senate has delayed action to pressure the House into accepting senators’ changes on a tight deadline — but she said such a strategy won’t work. If the Senate’s changes Wednesday are too major, the House will send the bill to a committee designed to iron out a compromise, and the April deadline will pass.

“It’ll come down to how the body votes on each and every one of those amendments,” said Senate Minority Leader Tom Begich, D-Anchorage.

Under the “lite” proposal, if the governor ends that declaration early, or if something else is needed afterward, the state’s health and social services commissioner is empowered to declare a kind of limited disaster on his own.

Both options are in the Senate bill.

Persistent misinformation on social media has added to the problem. Lawmakers have been pressured by constituents who incorrectly link the disaster bill to COVID-19 mitigation measures enacted by the Municipality of Anchorage. Those measures have been unpopular among some conservatives.