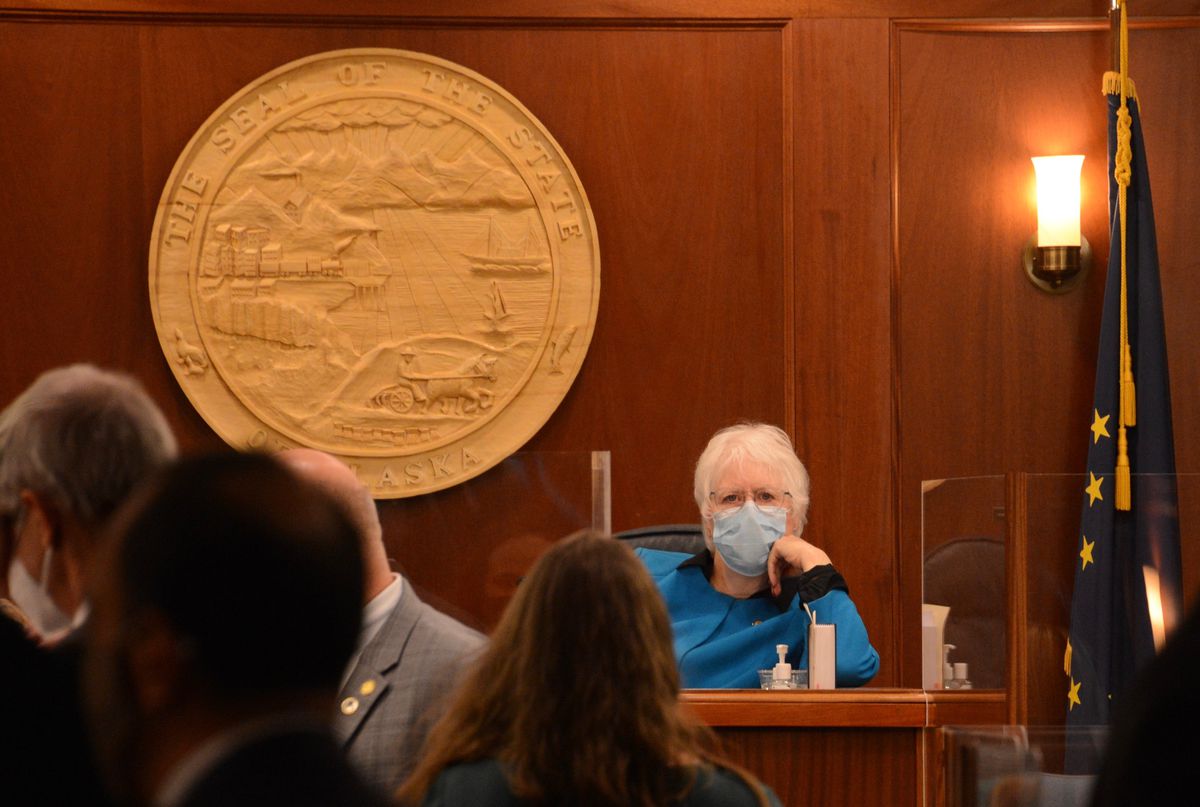 Speaker of the House Louise Stutes, R-Kodiak, leans on her arm before the start of a joint session of the Alaska Legislature on Monday, May 3, 2021 at the Alaska State Capitol in Juneau. (James Brooks / ADN)

Speaker of the House Louise Stutes, R-Kodiak, leans on her arm before the start of a joint session of the Alaska Legislature on Monday, May 3, 2021 at the Alaska State Capitol in Juneau. (James Brooks / ADN)

JUNEAU — The Alaska House of Representatives has postponed a key vote on Alaska’s state operating budget after Republican members objected to a schedule that would have cut off debate.

The budget was removed from the desks of the 40-member House late Sunday and put in the House Rules Committee, causing the House to take a step backward in the process to approve the budget needed to keep state services operating past July 1.

The delay is being caused by several factors, including organizational problems within the 21-member majority coalition.

Debate isn’t expected to resume until at least Wednesday.

The House’s governing majority includes 15 Democrats, four independents and two Republicans who are not required to vote together on budget issues. Over the weekend, Rep. Kelly Merrick, R-Eagle River, and Rep. Josiah Patkotak, I-Utqiagvik, repeatedly voted for changes proposed by members of the House’s 18-member Republican minority.

With the support of Rep. Sara Rasmussen, R-Anchorage — a Republican who is not a member of either the majority or minority — those changes had the 21 votes needed to become part of the House’s budget plan.

Among the amendments that passed with 21 votes were a requirement that the Capitol reopen to the public on May 19 and a small cut to public assistance funding. Two other minority amendments, including one setting aside $200,000 funding for lawsuits intended to preserve gun ownership rights, got 23 votes.

The House budget plan would still be subject to modification by the Senate and governor, but some majority lawmakers were alarmed by the prospect of a bill that included elements they couldn’t support.

“We thought there’d be a little more predictability, and then it deviated, so we wanted to stop and regroup and figure out where we want to go,” said Rep. Adam Wool, D-Fairbanks.

On Sunday morning, there was particular concern among members of the majority that upcoming amendments — most from Rep. David Eastman, R-Wasilla — would force difficult votes or have a good chance of becoming part of the budget.

Wool said those amendments tended to make funding for particular things contingent upon a separate action. In one hypothetical example, funding for the arts might require the Legislature to pass gun-rights legislation.

“There were some that might have passed that we didn’t want to pass, things like allowing guns on (University of Alaska) campus,” Wool said.

That morning, a procedural motion to open the amendment process for the day failed 20-20. That cut off debate and forced a debate on the budget as it stood.

Members of the House minority loudly protested the decision to end debate. Reps. Steve Thompson, R-Fairbanks, and Bart LeBon, R-Fairbanks, said they had been prepared to vote in favor of the budget, but not if the majority failed to vote on the minority amendments.

Rasmussen said she and Patkotak went to the House speaker and said they were uncomfortable with advancing on the budget until the minority amendments had been heard.

Patkotak said he gave his word that he would vote for the budget, and he intended to follow through, but his “morals and values” say that all minority amendments should be heard.

“I don’t think I should have to choose between my morals and values and my word,” he said.

Majority leaders negotiated with House Minority Leader Cathy Tilton, R-Wasilla, in an attempt to reduce the list of amendments, but those negotiations failed, leading to the decision to pull the budget back from a vote.

The wife of Rep. Grier Hopkins, D-Fairbanks, is expected to give birth this week, and Rep. Dan Ortiz, I-Ketchikan, said majority members believed the minority was drawing out debate until he was forced to leave the Capitol.

“There was a concern that might be a strategy: to wait until we didn’t have all of our members present,” Ortiz said.

Tilton said that wasn’t a strategy.

“Our caucus had no plan or strategy of trying to extend the process. We actually were in support of getting the bill to the Senate as soon as possible,” she said.

The minority, she said, wants to get the Legislature’s work done by May 19, when the regular session ends, and delaying would be counterproductive.

After Saturday’s floor session consumed 12 hours without much progress, members of the minority had agreed to limit debate for Sunday, Tilton said.

Stutes and House Majority Leader Chris Tuck, D-Anchorage, each said they believe they had the votes to force the budget through if debate had continued.

But given that the majority needs to work with the minority for the next year and a half — until the 2022 elections — that isn’t a good idea.

“Slamming it through without giving them their opportunity wouldn’t have been fruitful for our relationship,” Stutes said.

“We got a lot of other bills that we need to consider,” Tuck said.