Alaska spends far less on government than it did two years ago. But is it 'right-sized' yet? 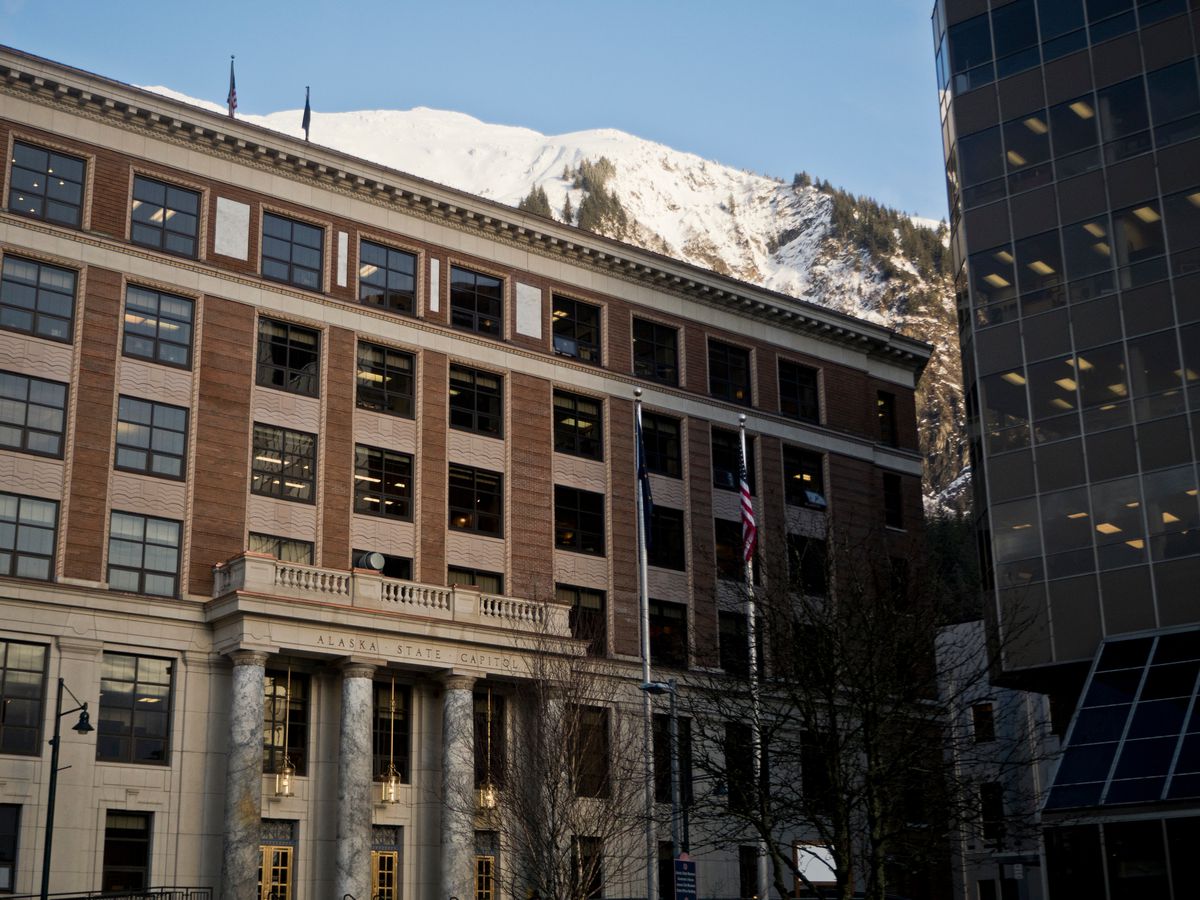 JUNEAU — As the Legislature considers taxing Alaskans and reducing their Permanent Fund dividends to help close the state's $3 billion deficit, is state government still big enough to sustain more budget cuts? Or is the call to keep shrinking state spending rooted in political ideology, not the reality of governing.

In other words, is state government "too big" or "right-sized"?

One possible sign of an answer: After big reductions in each of the past two legislative sessions, lawmakers are having trouble finding more services that they're willing to cut to close the state's budget hole.

In two months of digging through details of agency programs this year, the state House — led by a coalition of Democrats and a few Republicans and independents — passed an annual budget that was actually slightly larger than the version proposed by Gov. Bill Walker, leaving most agencies' spending unchanged.

House leaders initially proposed cutting nearly $50 million from state assistance payments for school construction, suggesting communities could make up the difference with taxes. But they abandoned the plan amid opposition from the public and school district officials.

The Republican-led Senate majority, meanwhile, says there's still enough waste and fat in state government and is proposing to cut $300 million from the $4.4 billion operating budget.

But as it nears the end of its budget review, the Senate majority has so far identified actual reductions of roughly $190 million, or a little less than two-thirds of its pledged amount — and that number includes the $120 million in cuts sent to them by Gov. Bill Walker in his initial budget proposal, leaving $70 million as their own.

In an interview, the Senate majority leader, Soldotna Republican Peter Micciche, acknowledged that government inefficiency takes more work to find now that unrestricted general fund spending is down by one-fourth over the past two years. The state estimated its workforce at 23,900 in December, down from 26,600 in 2014.

"There's no question that three years ago, low-hanging fruit remained in the budget," Micciche said. "There truly was fat."

Now, he said: "We've trimmed back on what was nice to have. I think now we're getting into the core of those Alaskans who really do need and count on these services."

With state deficit at nearly $3 billion and agency spending at $3.9 billion, lawmakers acknowledge that they can't balance the budget with cuts alone. And a widely cited study from the University of Alaska's Institute of Social and Economic Research says broad-based reductions and cuts to the state workforce cause much larger job losses in the economy than other deficit-reduction measures, like taxes or diminished Permanent Fund dividends.

Lawmakers, especially Republicans, have nonetheless persisted in their drive for reductions, arguing that government should also be downsized amid a statewide recession that's hitting the private sector. And both chambers this year have identified areas where the state could be spending less cash.

The House, through its budget process, collected cost-cutting or revenue proposals that could be enacted through separate legislation. Among the ideas were repealing royalty discounts for Cook Inlet oil and gas companies that keep $70 million a year out of state accounts; reducing registration discounts for vehicles owned by cities and charities; and eliminating exemptions allowing dividends to be issued to people outside the state, whose checks totaled $27 million last year.

The Senate has proposed reductions for the state university system and its ferries and health programs. And it's contemplating a 5 percent cut to schools.

Advocates for smaller government point out that the state has found new sources of cash in the past two years to make up for its general fund cuts, with agencies spending only 3 percent less when accounting for federal money.

But they also concede that new cuts are taking more work and time to uncover — and the ones that are proposed now face stiffer political opposition.

Lots of programs could still be changed or reduced, Gattis added. But, she asked: "Do people get re-elected if they do that?"

Each of the state's 14 executive-branch agencies spends less from the general fund than two years ago, as does the governor's office, the Legislature and the state's university and court systems.

Some have been cut drastically. The Labor Department now spends one-third less than in 2015, while Commerce Department spending is down 60 percent.

The drop in the state workforce hasn't been abrupt, and Walker's administration has tried to eliminate vacant positions instead of firing workers in filled ones. But that doesn't diminish the economic impact, said Neal Fried, a Labor Department economist.

"It doesn't cause as much trauma and it doesn't generate very much news because it's not a layoff. It's not like when they send out pink slips," he said. "But those job loses have an effect on the economy if you don't fill them."

Lawmakers have approved direct cuts to programs and services, like the ferry system.

Its ships are working a total of 336 weeks this year, down from 378 weeks in 2015, leaving some places with long breaks in services.

Sitka, one of the largest cities in Southeast Alaska, went nearly two months this winter without a northbound ferry. Sitka Democratic Rep. Jonathan Kreiss-Tomkins said the gap forced him to send his Jeep the other direction to Petersburg, where a friend picked it up and put it on another ferry to Juneau for the legislative session.

The state troopers highway patrol unit has fallen from 23 to eight positions, with its general fund budget dropping from $2.6 million to $1.6 million. Trooper cuts have been felt in Anchorage as well as rural communities, with trooper posts in Girdwood and Talkeetna closing and state law enforcement ending for Turnagain Arm communities within the Anchorage municipality.

A $9 million subsidized heating program is gone — though federal grants remain — and cash payments for low- and middle-income senior citizens have been reduced, with recipients at the highest qualifying level of income — up to $26,000 yearly — now get $76 a month instead of $125.

The state capital budget, which long boosted Alaska's construction industry, is now a fraction of its size of a few years ago. The current capital budget is $96 million in unrestricted general funds, down from $600 million in 2015 and $1.9 billion two years before that.

Some companies are moving workers Outside, said John MacKinnon, the head of the Associated General Contractors of Alaska — the state's construction lobby — who's also married to one of the Senate's main budget writers, finance committee co-chair Anna MacKinnon, R-Eagle River.

"Every dollar you don't spend today turns into four or five dollars tomorrow," MacKinnon said, referring to "deferred maintenance" on buildings that the state's putting off. "At some point we're going to have to pay the piper."

State agencies have also reduced administrative spending, with seven different departments losing assistant or deputy commissioners, or special assistants. One ongoing Walker administrative initiative aims to centralize the state workers who handle travel, debt collection and building maintenance in each of the 14 departments.

The "shared services" program is working out of a converted library on the eighth floor of the State Office Building in Juneau, said Kevin Brooks, its new director. Its target is $2 million in annual savings within a few years, which he said could be reached with steps like reducing some of the 230 state jobs currently dedicated to coordinating travel.

People and groups who benefit from government services, meanwhile, are being asked to pay more to support them.

Lawmakers last year approved legislation to increase prices for hunting, trapping and sportfishing licenses and tags. The hike brings resident hunting licenses to $45 from $25, and charges nonresidents $25, instead of $20, for a one-day sportfishing license. The new fees are projected to raise more than $9 million, which will be used to offset Walker's proposal to budget $5 million less in unrestricted general funds for the Department of Fish and Game next year — a 9 percent decrease.

Monthly fees for elderly Alaskans to stay in the state-run Pioneer Homes are also increasing by 10 percent, with separate increases this year and last year pushing monthly fees for the lowest level of care to $2,588 from $2,350.

The Legislature last year approved two Senate bills overhauling the state's Medicaid health care program and its criminal justice system — both of which cost the state hundreds of millions of dollars a year.

Each measure is projected to save the state tens of millions of dollars annually. But both took two years of detailed committee work to pass.

Further cuts to the state's largest programs, like education and health care, would likely require similar efforts, since those budgets are largely determined by formulas that earmark a specific amount of cash for individual students or patients.

"In order to get major reductions, we have to have legislative change," said Pat Pitney, Walker's budget director. "They direct what we spend."

But no such major efforts have advanced this year when it comes to education, the largest line item in the budget — though the Senate's Republican-led majority introduced a new bill to reduce education costs this week, in part by reducing pay for school bus drivers and state-paid inspections of school buses.

A special House education task force that finished its work two years ago failed to produce any major savings.

Senate Republicans have promised to slice another $450 million from the state budget over the next two legislative sessions — after they find $300 million in reductions this year. But their counterparts in the House are starting to argue that state spending has already hit its lower limit.

"Nobody wants to pay through an income tax or whatever it might be," said Nome Democratic Rep. Neal Foster, co-chair of the House Finance Committee. "But you get to a point where you just can't make cuts any more."

Correction: An earlier version of this story incorrectly quoted an Institute of Social and Economic Research study as saying that broad-based reductions and cuts to the state workforce cause much larger job and income losses than other deficit-reduction measures. The study concluded that big budget cuts would create much larger job losses — but not income losses — than other measures like taxes or diminished Permanent Fund dividends.