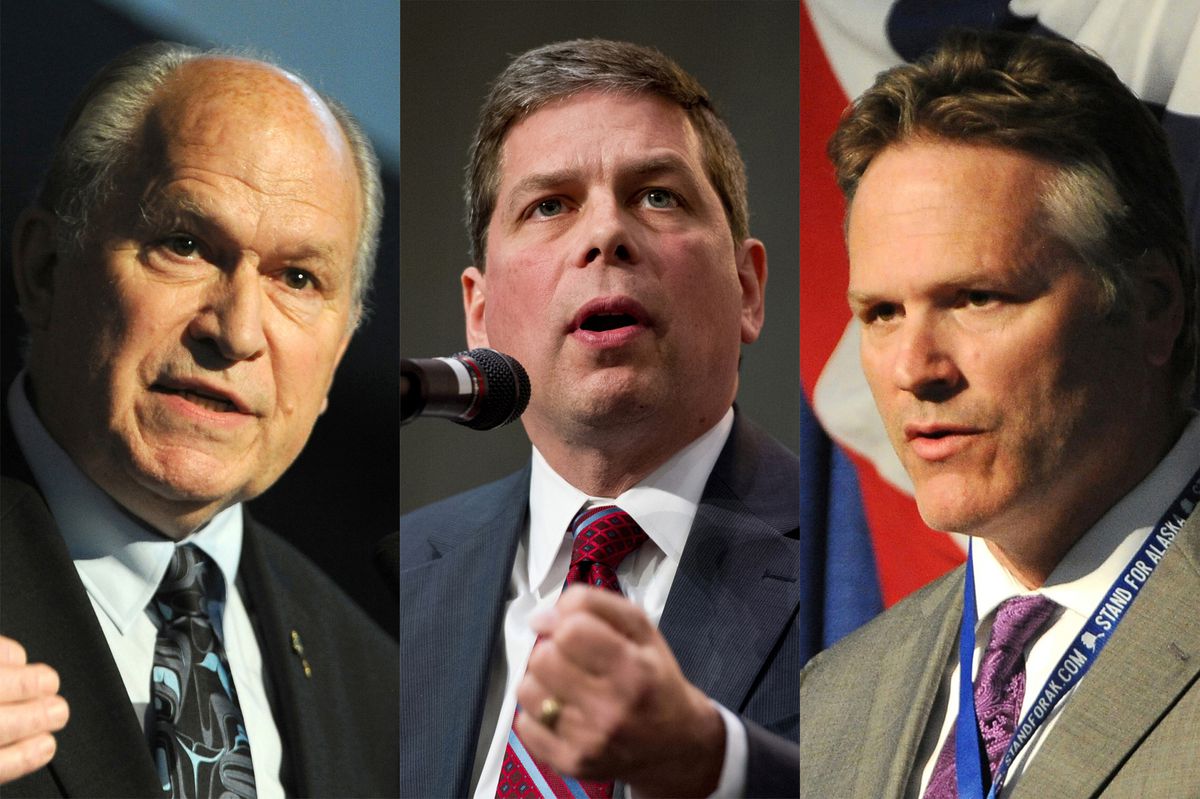 The three leading candidates for Alaska governor weren't asked specifically about crime or a long-term budget plan Monday evening in Anchorage, but they still managed to trade jabs over the topics at the one-hour, aviation-focused town hall.

Roughly 200 people at the Alaska Aviation Museum watched as Democrat Mark Begich, Republican Mike Dunleavy and incumbent Gov. Bill Walker, an independent, fielded questions that included what role state government should play in land access issues and whether they would consider organizing aviation staff within the state transportation department under a single division.

(Answers to the first question varied, and to the second question, all said they were open to it.)

With just over a month until the Nov. 6 general election, Monday's forum was just one example of the candidates appearing at relatively low-key, non-televised events to try to win votes.

Here's a recap of four moments from Monday evening. (For more from the forum, check out the video below.)

Each candidate had two minutes for closing remarks.

Dunleavy, a former state senator, said that during the last four years, Alaska has had some of the worst statistics in the country, from educational outcomes to crime to unemployment. He said that's because of poor management. He also said Alaska needs to develop its resources, and he believes the state can get its budget under control without taxes.

"If you believe in Alaska and if you believe in the promise of Alaska — that Alaska, with all of its resources, could put people to work, create new wealth, instead of taking it from one individual and giving it to another — then you have a choice in this election and that choice is me," Dunleavy said.

Begich, a former U.S. senator and Anchorage mayor, pointed out that both Dunleavy and Walker were in Juneau the last four years.

Begich said he also believes in the future of Alaska. There needs to be a comprehensive crime plan, and the Permanent Fund dividend needs to be protected for generations, he said. People shouldn't think about adding or subtracting a few dollars from Alaska's education system but think about how to reinvent it.

"What I've seen the last four years is the same old business — eight special sessions, can't get their job done, no long-term fiscal plan that's stable and sustainable," Begich said. "This is not the stable environment we need to grow this state to the future. We need to be thinking beyond that."

Walker fired back that it was "amazing" to hear Begich and Dunleavy talk about unemployment and other statistics. They must have missed that Alaska had a huge fiscal deficit that needed to be fixed, he said. One of the candidates "didn't show up," he said, and the other quit. Yes, Alaska has a high crime rate, he said, but it's also in the throes of an opioid crisis, which he declared a public health disaster in 2017.

"So when there's criticism that 'Well, these last four years have been tough,' damn right they've been tough," Walker said. "But really tough on those who stayed and did the work."

Hester reminded candidates to try to stick to the questions after Walker deviated when they were asked whether they believed there should be some sort of accountability report for state departments. (All said yes.)

Walker used most of his two minutes to, he said, respond to Dunleavy. Dunleavy had said earlier he heard "folks" talk about how they'd been dealt a bad hand, which he said he would not do as governor.

Walker said he doesn't complain that he was dealt a bad hand. That hand, he said, was set up by former legislators such as Dunleavy and his running mate, state Sen. Kevin Meyer. Walker also questioned where Dunleavy would cut $1.1 billion from the budget.

Asked about what role state government should play in access to federal and state lands and adjacent waterways, Begich said it's not just about having access, but also about accessible, quality runways and investment to make sure that infrastructure is solid.

"I think the governor's role and the state of Alaska's role is to make sure that people do have access where necessary," Begich said. "But you also have to make sure there are parts of our state that have limited ability to get into for a variety of reasons."

Dunleavy said "access is crucial for all of us" and Alaska has a number of access issues.

"It's a fundamental right to be able to travel unimpeded," he said. "We need to make sure that we push back on the federal government when we need to exert our constitutional rights and our state rights."

Walker said access is critical and the state has a significant role in that. He said Interior Secretary Ryan Zinke has "a very different attitude" from his predecessor in the Obama administration, and Alaska must make as many advances as it can.

Where was the Libertarian candidate?

Billy Toien, the Libertarian candidate for governor, has attended previous candidate forums but wasn't onstage Monday. He wasn't invited to participate, he said.

Toien, a concierge at the Sheraton Anchorage Hotel and Spa, sat in the front row instead. He wore a suit and occasionally took notes.

"I'm a legitimate candidate," he said in a brief interview before the town hall began. "I'm being excluded."

Hester said candidates were invited based on the percentage of support they received in statewide polling.