Democrats are attacking Dunleavy’s voting record on the PFD. How’d he actually vote? 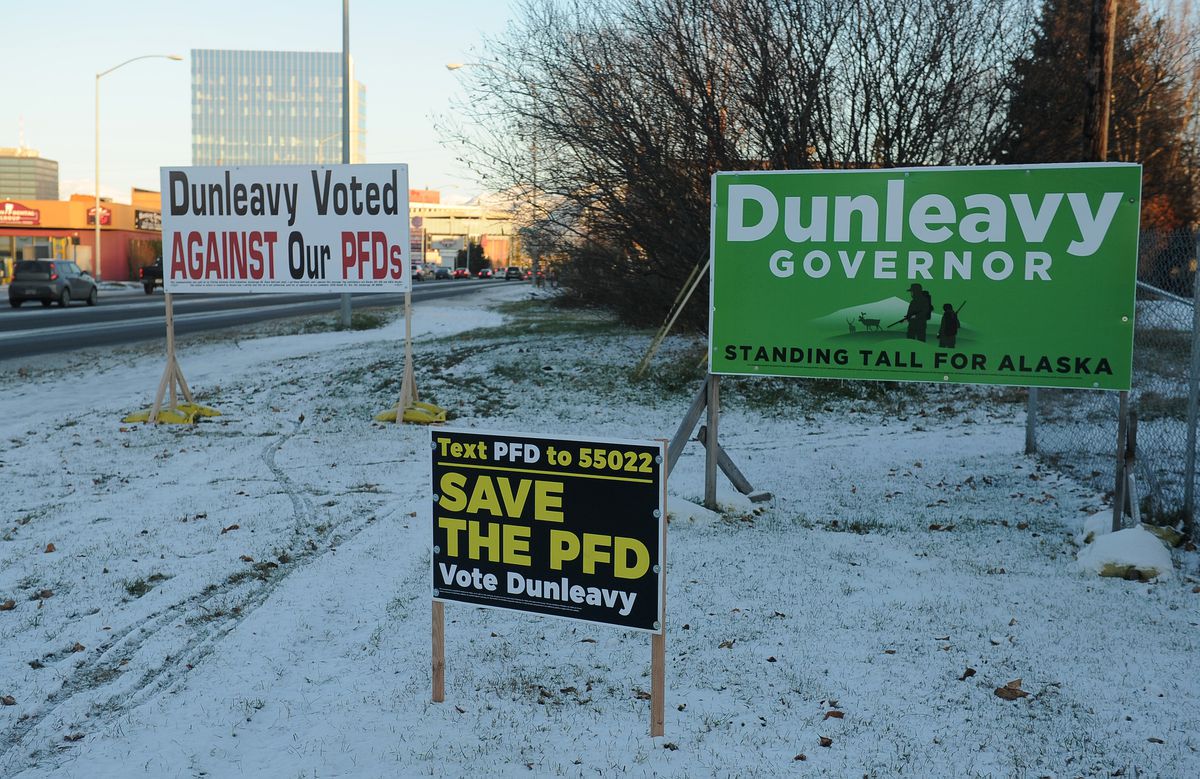 Signs dotting Anchorage roadways have clashing messages about Mike Dunleavy, the Republican candidate for Alaska governor, and his support of the Permanent Fund dividend.

Take this example off West Benson Boulevard. One sign reads: "SAVE THE PFD Vote Dunleavy." Feet away there's another sign: "Dunleavy Voted AGAINST Our PFDs."

So which is it?

State Sen. Bill Wielechowski, an Anchorage Democrat, argues that Dunleavy, a former state senator from Wasilla, voted in the Senate against paying a full Permanent Fund dividend to Alaskans and against overturning Gov. Bill Walker's veto of part of the payouts.

During recent debates, Mark Begich, the Democratic candidate for governor, has criticized Dunleavy for his votes on the PFD, too.

"They're trying to hide behind procedural gimmicks," Wielechowski fired back in an interview.

[Related: Here's what the two major candidates for Alaska governor want to do with the Permanent Fund dividend]

Wielechowski highlighted Dunleavy's PFD votes in an op-ed in the Daily News this week in response to an ad. Wielechowski, who has endorsed Begich, wrote about why he disagreed with Dunleavy, including criticizing the Republican candidate for how he voted on the Permanent Fund and dividend issues.

While Dunleavy "eventually did come around to supporting the PFD, the fact remains that had he stood up in the first place when the PFD was being cut, we wouldn't be in this situation," Wielechowski wrote.

In an emailed statement, Dunleavy said: "I was surprised to read my friend Bill's comments, since he knows better than anyone I've always strongly supported the PFD. I've never voted against the PFD — not once, twice or twelve times. My record is clear."

Dunleavy cited examples of his record, including bills he sponsored to restore the PFD and his decision to vote against the operating budget in 2017 (HB 57) because the bill didn't fully fund the PFD, he said in the statement.

"This vote cost me my committees, chairmanships, staff and my membership in the majority caucus. But I did it because it was the right thing to do," Dunleavy said.

The Alaska Senate's Republican-led majority removed Dunleavy from his key committee posts for his April 2017 vote against the caucus's budget proposal. The majority gave Dunleavy's position as chair of the Senate State Affairs Committee to Anchorage Republican Sen. Kevin Meyer, who's currently running for the lieutenant governor job on the Republican ticket.

To be a member of the caucus, senators must follow two rules: Pass the budget proposal once it reaches the Senate floor and, in a procedural vote, support the ruling of the presiding officer, according to Sen. Anna MacKinnon, R-Eagle River, who has thrown her support to Dunleavy.

Dunleavy and Wielechowski served in the Alaska Senate together for five years. Dunleavy resigned from the Senate in January 2018 to focus on his campaign for governor.

Wielechowski, along with two longtime Alaska politicians, filed a lawsuit in 2016 challenging Walker's legal authority to veto part of the dividend. The Alaska Supreme Court later upheld the veto.

In an email, Wielechowski cited a list of instances where, he said, Dunleavy could have stood up for the PFD but did not.

Wielechowski took issue with Dunleavy's votes on amendments to HB 57 — the budget proposal the Republican candidate ultimately voted against.

"They all voted no — six times," Wielechowski wrote in his op-ed.

(The Alaska Senate Democrats posted a video about the votes on their Facebook page last year.)

McDonald said in an email: "All the votes cited by Wielechowski on his amendments were procedural." McDonald underscored that Dunleavy ultimately voted against the budget proposal, breaking with his caucus.

Wielechowski included several other examples of Dunleavy's votes on the PFD. Here's a look at a few of them, as well as McDonald's response. They don't see eye-to-eye.

McDonald said there was never a vote calling the Legislature to a joint session. The motion was ruled out of order.

According to an Anchorage Daily News article, then-majority leader, Republican John Coghill, had ruled Wielechowski's request out of order and the Senate voted whether to uphold Coghill's ruling. Fourteen senators, including Dunleavy, voted to uphold the ruling and three senators opposed it.

• March 2017: Wielechowski said that he has sponsored resolutions for years to put the PFD in the Alaska Constitution, which he said Dunleavy failed to co-sponsor. When the bill went to Dunleavy's committee, Dunleavy refused to mark it "Do Pass," Wielechowski said. Dunleavy signed "no recommendation" in March 2017.

McDonald said Dunleavy, as the committee chair, scheduled the bill for a hearing and moved it on to the next committee.

"It's the chair's prerogative whether a bill or resolution is heard," McDonald said.

• April 2017: Dunleavy introduced a bill in 2017 to restore the 2016 dividend, Wielechowski said. The bill "languished" in committee, Wielechowski said, so he made a motion to get the bill out of committee through a procedural vote. Dunleavy, and Senate Republicans, voted against the move in April 2017. Dunleavy withdrew his bill later that month.

McDonald said that Dunleavy "had another vehicle to restore the PFD, SB 2, which he was able to move through the State Affairs Committee."

The bill was referred to the Senate Finance Committee, but didn't make it out of committee.

McDonald also said in an email that, as recently as last year, Begich "supported the House Majority's plan to cut the PFD," pointing to a July 2017 op-ed written by Begich, a former U.S. senator and Anchorage mayor.

Nora Morse, Begich's campaign manager, countered that Begich was not endorsing the House Majority's PFD plan in the op-ed.

"He was saying that he supported their efforts to look beyond the short term and try to achieve a long-term solution given the repeated instances of short-term band aids and kicking the can down the road," she said in an email. She also pointed to a February 2018 op-ed written by Begich about his PFD plan.