18 days and 4,200 miles on a bike end with one big victory for Anchorage woman 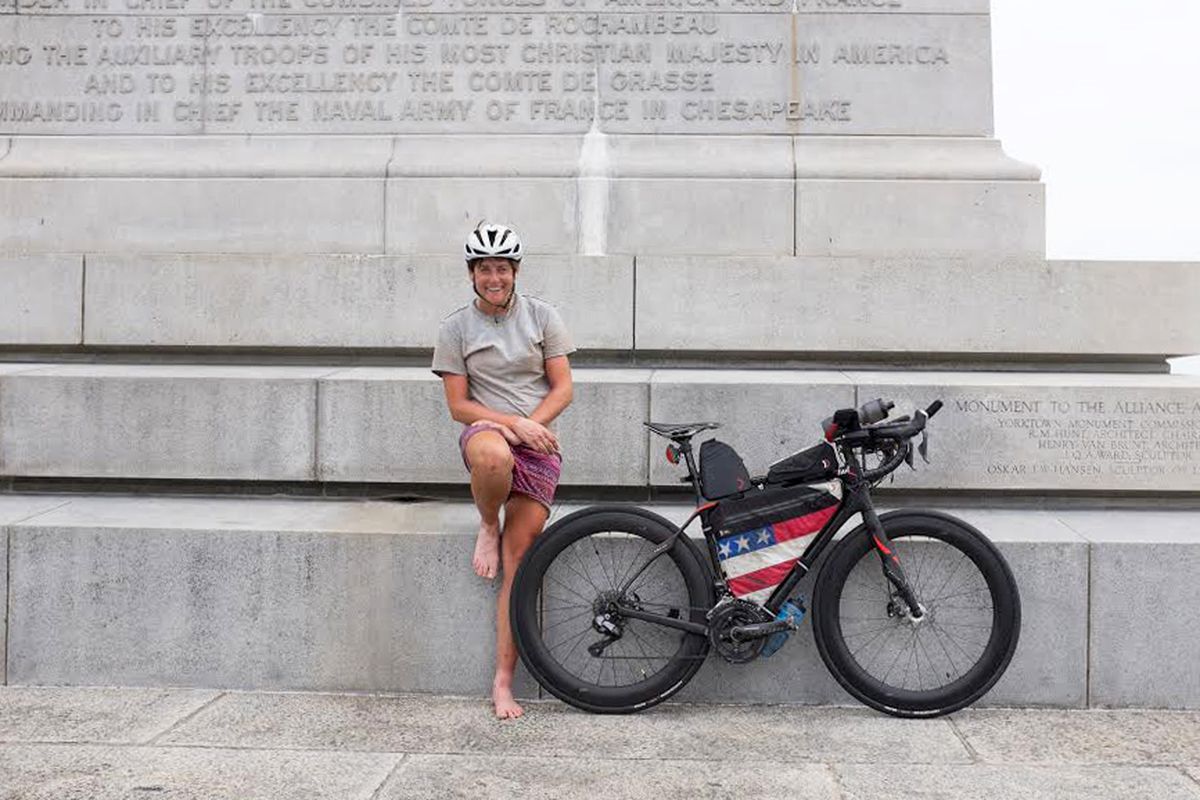 Cyclist Lael Wilcox of Anchorage relaxes at the Yorktown Victory Monument after she came from behind on the final day of an 18-day race Wednesday, June 22, 2016, to win the 4,200-mile Trans Am Bike Race. (Nicholas Carman)

Cyclist Lael Wilcox of Anchorage relaxes at the Yorktown Victory Monument after she came from behind on the final day of an 18-day race Wednesday, June 22, 2016, to win the 4,200-mile Trans Am Bike Race. (Nicholas Carman)

After spending the previous night sleeping for 30 minutes in a roadside field in Virginia, cyclist Lael Wilcox of Anchorage came from behind on the final day of an 18-day race Wednesday to win the 4,200-mile Trans Am Bike Race.

Wilcox, 29, was the first racer — man or woman — to reach the finish line in Yorktown, Virginia.

She arrived around 11 a.m. EDT to top a field of 62 solo riders in what's touted as the nation's longest self-supported bike race.

"A woman's never won a big endurance bike race like this, so it's definitely a big deal for me," Wilcox said by phone.

"… I was never in the lead. I was just kind of holding on for dear life. I said, 'I'm going to do the best I can and see what happens, and if I get a window of opportunity I'll take advantage.' "

Opportunity came early Wednesday morning when Steffan Streich of Greece, the man who led most of the race, made a mistake.

Streich woke up in the dark, got on his bike and started cycling in the wrong direction. He didn't realize his mistake until he crossed paths with Wilcox near Ashland, Virginia, about 130 miles from the finish line.

Wilcox rebuffed Streich's suggestion they ride the final stretch together and share the victory.

"Oh, c'mon, that's the fun part about it," Wilcox said. "We'd been riding for days and days and days, and a race to the end is exciting. I'm not gonna give up that chance. You get a one in 1,000 chance to get a race to the finish in something like this."

Cyclists began the race the morning of June 4 in Astoria, Oregon.

Wilcox, a 2004 East High School graduate, spent much of the race in second, third or fourth place.

She rode a Ruby Specialized, a new road bike she acquired in Anchorage prior to the race.

To break it in, Wilcox rode the bike from Anchorage to Astoria.

In other words, she followed her routine. Crazy endurance warmup rides prior to crazy endurance bike races are everyday matters for Wilcox.

Last year, she pedaled from Anchorage to Banff, Alberta, Canada, for the start of the 2,745-mile Tour Divide, a race that roughly follows the Continental Divide from Banff to Antelope Wells, New Mexico.

Wilcox shattered the women's record in that race despite poor respiratory health that sent her to an urgent care clinic in Montana.

For the Trans Am race, Wilcox enjoyed good health while traveling in relative comfort.

"I slept in a bed all the time during this race because I was riding with a guy who wanted to stay in a motel almost every night," she said. "So I slept in beds, took showers — it was really pretty civilized. Which is different from the other races I've done. I've done endurance mountain bike races where I'm pretty much sleeping in a bivvy sack every night."

Wilcox said she rode half the race with Evan Deutsch, although Deutsch got tired near the end and wanted more sleep. Wilcox pushed ahead without him to seize sole control of second place.

Around midnight Tuesday she got sleepy and stopped at a field for a nap.

"At that point I started feeling pretty awake."

Wilcox said she averaged four to six hours of sleep per night until the final three days, when she slept a total of six hours.

She consumed about 10,000 calories a day and said she was tired of eating all of the time.

"I never sat to eat," she said. "I ate every meal on a bike. I ate those packaged pastries, chips, candy bars, ready-made burgers.

"You have to eat so much to do this kind of a thing. I was chugging liters of chocolate milk and forcing all sorts of food."

Other than all of that food, Wilcox traveled light. She said her bike and her gear weighed a combined 35 pounds.

Wilcox collected no prize money and no trophy for her victory. Her reward comes from doing what she loves to do – seeing the world from the seat of a bicycle.

Wilcox and boyfriend Nicholas Carman have been cycling the world for nearly a decade. They work when they need money – Wilcox recently worked at the Bicycle Shop in Anchorage — and the rest of the time they ride their bikes.

"We've been traveling on bikes pretty much half a year every year for the last eight years. So this is our lifestyle." Wilcox said. "…The true story is it's really cheap to live on a bike. We don't own a house or a car or anything so we don't have many expenses."

Carman, who chronicled the Trans America race on his blog, met Wilcox at the finish line on Wednesday. The couple's immediate plan is to head to New York to visit Carman's family, Wilcox said.

They'll make the 700-mile journey on their bikes.